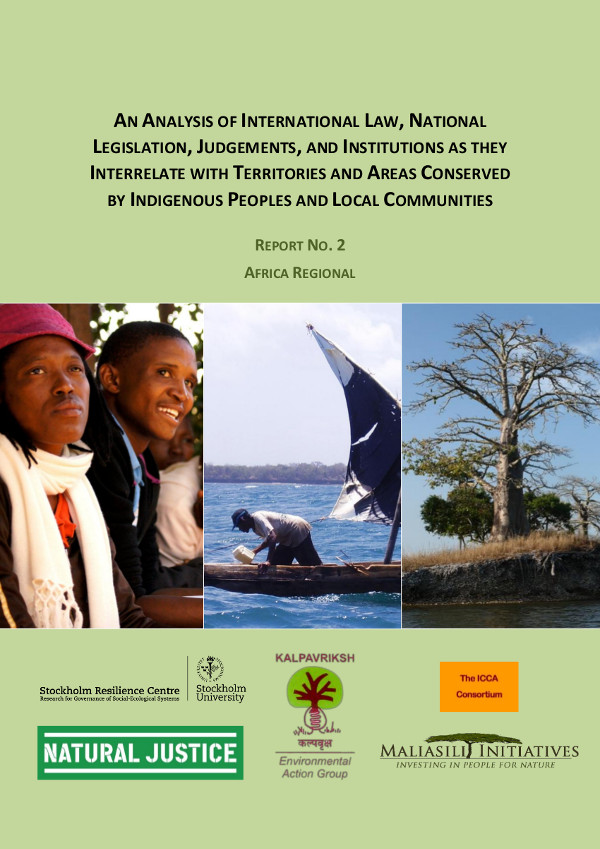 This report provides a synthesis of three country level case studies (Namibia, Senegal, Kenya) carried out in African countries as a part of the overall legal review of Indigenous People’s and Community Conserved Territories and Areas (ICCAs). This regional synthesis report also incorporates information and material from other African countries’ experiences with ICCAs, as documented in a range of other studies and publications.

African countries possess a tremendous diversity of biophysical landscapes and human communities, with strong interconnections between the two in rural areas. ICCAs encompass a wide range of livelihoods and ecosystems, including marine fisheries, community forests, pastoralists’ grazing areas, and wildlife conservation areas which are now often connected to more modern enterprises such as tourism.

All three countries reviewed possess large and growing areas of formally established ICCAs, including large areas of Namibia and Kenya established as wildlife conservancies; Namibia is the leader in Africa in community wildlife management, with over 70 Communal Conservancies, now covering nearly 15 million ha, or more than 16% of the country’s total area. Senegal and Kenya have a wide range of traditionally conserved areas, such as numerous Sacred Natural Sites, such as the Kaya forests of Kenya. Both Kenya and Senegal also possess some important emerging coastal marine ICCAs, which in Kenya has been provided legal underpinning through the mechanisms of Beach Management
Units.