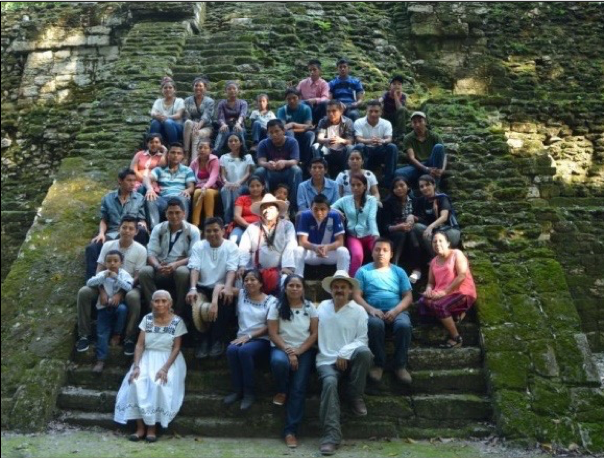 By: Ernesto Noriega and Tatjana Puschkarsky, OrigiNations and Honorary members of the ICCA Cosnrotium

The Itzá Maya people have influenced the history of Mesoamerica in important ways. Originating from the area around Lake Petén Itzá in Guatemala, they migrated to the northern Yucatán lowlands at the end of the first millenium. There they established a vast trade empire centered around their capital, Chichén Itzá, a dominion that extended as far as Honduras. The Itzá returned to the Petén region in the XIII century, where they built the island city of Nojpetén or Tayasal (today Flores) which became the capital of the last independent Maya kingdom to fall under colonial rule, capitulating only in 1697. Today, the majority of their approximately 2,500 descendants live in the town of San José on the northern shore of Lake Petén Itzá.

The Itzá people are struggling to maintain their culture, and to effectively defend and conserve their communal land. The strict prohibition against speaking the Itzá language during the first half of the 20th century has left only a few elderly adults who are capable of speaking it fluently today. Most of the young people are growing increasingly disconnected from their traditional knowledge and history and are leaving the community in search of education and working opportunities. Although an outpouring of attention and financial aid by international institutions and NGOs flowed into Guatemala in the 1990s at the end of a civil war that lasted over 30 years, in the case of the Itzá, the uneven sharing of the new resources contributed to the creation of deep divisions within the community, particularly around the governance of the Bio-Itzá Forest Reserve. These divisions have made it difficult for the community to develop a shared vision of this conserved forest and a concerted strategy to protect its common cultural and natural heritage.

With the help of the ICCA Consortium, OrigiNations visited San José in late 2014.  On that occasion, representatives of local civil society organizations pointed to the urgent need to help the Itzá youth to reconnect to their roots and to prepare them to take the protection of their culture and territory into their own hands. It is clear, however, that the emergence of a new generation of leaders will only be possible if all local organizations join together to support them. After a series of informal meetings, the main organizations agreed to turn the page and unite in this effort. OrigiNations was asked to support the local organizations to  organize a pilot workshop with local youth as a first step in promoting a broad movement for the protection of the cultural and natural heritage of the Itzá people. The five local organizations involved in this effort include: Academia de Lenguas Mayas de Guatemala (ALMG), responsible for the documentation and promotion of the Itzá language; Asociación Solidaria de Acción y Propuesta de Petén (ASAPP), which fosters organic farming and the preservation of native seeds; Ut’an Samal, dedicated to the conservation and promotion of cultural traditions; Asociación BioItza, working on nature conservation and the management of the communal forest reserve; and Asociación de Plantas Medicinales, committed to the promotion of traditional healing methods.

The five local organizations selected 25 young men and women between the ages of 15 and 22 to participate in a week-long immersion workshop which took place at Yaxhá, an archaeological complex within the borders of the Yaxhá-Nakum-Naranjo National Park, from the 9th to 16th of December, 2015. This ancient place has an enormous significance for the Itzá people, particularly the site at Topoxté, an island settlement on Lake Yaxhá.  It contains the only architectural remains in Guatemala directly traceable to the ancestors of the modern Itzá. Through successful negotiations with the National Council of Protected Areas of Guatemala (CONAP) and the Institute of Anthropology and History (IDAEH), we had the opportunity to live and work a full week within the archeological site. These two national institutions were extraordinarily generous with the group, and offered the use of bungalows, campsite, kitchen, offices and working spaces. They encouraged the young Itzá to interact with the resident archaeologist and the rest of the scientific team. CONAP and IDAEH saw this occasion as an unprecedented opportunity to engage and inspire  this group of young people who had real and strong historical ties to the site. Weaving the dialogue between generations © OrigiNations

The young participants were accommodated for the workshop among the monuments built by their ancestors: they were given extensive guided visits and star-watching sessions atop ancient astronomical observatories; they could roam individually through the vast expanse and imagine life at a time when the city was still whole and pulsing with activity; they worked in groups in a series of creative exercises that culminated with their own interpretation of the place in the form of drawings, videos, photo-stories, theater sketches and poems; they were also invited to conceive and design a space dedicated to the living Itzá culture, to be considered for addition to the recently inaugurated interpretation centre. And they were introduced to Maya mathematics and Maya epigraphy (writing). The week was capped by a ritual ceremony performed by a traditional priest on the island of Topoxté.

Throughout the week, as they were inspired by the achievements of their forebears and their cultural self-esteem and awareness grew, the workshop participants shared in discussions about the consequences of cultural loss, discrimination and an inadequate educational system, a system that does not recognize their distinctiveness or the degradation of their land and the lake.   They shared ideas about what they can do to reverse a trend which is rapidly eroding their culture and threatening the integrity of their land. Community elders and members of the five local organizations accompanied and supported the youth as they talked and reflected. Films and case studies were shown to illustrate  how other indigenous communities, and other indigenous youth throughout the world, are dealing with these very same challenges.

As a result of the workshop, the participants have taken the first steps to form a youth association dedicated to the protection of their heritage, promoting their culture and defending their landscape. They have elected a five-member board and have given themselves a name that can be translated as “Weavers of the Future”. Their first project will be to document and record the knowledge, stories, and memories of the oldest members of the community (given the sense of urgency that they feel about getting on with this endeavor before it is too late, OrigiNations has provided them with a video recorder and two photo cameras). Other envisioned activities include learning the Itzá language and developing children’s books based on local stories; holding cultural and culinary events in the village; collaborating with schools in the development of culturally appropriate learning units and anti-discrimination initiatives; organizing reforestation campaigns and community clean-ups of the shores of the lake; informing the population about sustainable agriculture; learning about medicinal plants; promoting the establishment of a cultural center in San José; proposing a scholarship system for indigenous youth who want to pursue professions conducive to the advancement of their cultural and natural heritage. They are also interested in exchanges with Maya youth from communities in neighboring Belize and Yucatán, with whom they share a common history, culture and language.

This first workshop has sparked a renewed interest in their heritage among the young Itzá, along with  a commitment to protect it. At the same time, it has united a committed but previously fragmented civil society around the common goal of supporting this new generation of leaders: young people who are rooted in their culture, well informed about the world, and devoted to defending the interests of the Itzá people. OrigiNations and other members of the ICCA Consortium in Guatemala will continue to support this process. Hopefully this momentum will also be sustained by some GEF SGP grants as part of the GSI initiative.