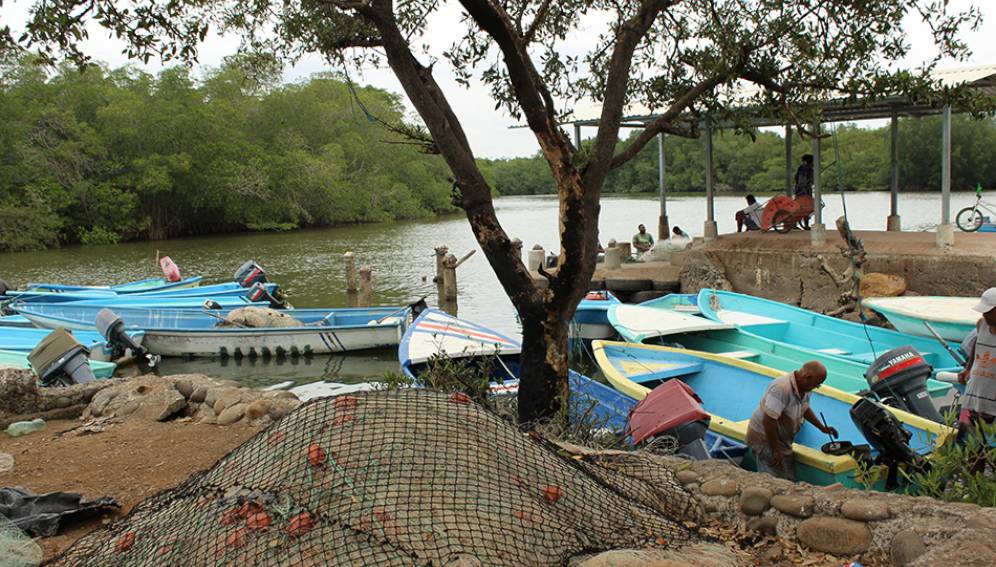 FAO’s move to shore up the rights of small-scale fishers is making waves in Costa Rica.

In August 2015, the government of Costa Rica received a letter from a tiny fishing community on the northern Caribbean coast. Nestled between Tortuguero National Park and the Nicaragua border, the community of Barra del Colorado — some 2,000 people — has been quietly making a living out of shrimp fishing for generations. The letter took issue with a 2013 constitutional vote to a ban trawling — a fishing method that can damage marine environments by pulling along undesired fish species and destroying habitats at the ocean bottom.

The vote targeted industrial and semi-industrial trawling operations. But it made no exception for fishers operating at a smaller scale, to catch fish for food or to sell locally for a basic income. For Barra del Colorado and similar communities, it meant losing the legal right to their only livelihood, and a way of life.

“In this place this is the only work we can do,” says Ligia Mejia Guzman as she deftly cleans the day’s catch, shrimp by shrimp. The work, which occupies most women in the community, is without social security, leaves fingers bleeding as acid wears off the skin, and earns her about 20,000 colones (US$35) each day — on a good day — for two short fishing seasons a year. She learned it as a child and, like the rest, she is thankful for it.

The letter marked the beginning of a fight for the licence to fish, which continues today. One of the community’s allies is CoopeSoliDar R.L, a local development NGO that facilitated a consensus-building policy process — the National Dialogue for the sustainable use of shrimp — involving government institutions, NGOs, and all productive fishing sectors.

“We have been dealing with conflicts at the grassroots level, very serious conflicts, trying to get an equilibrium between marine conservation and the sustainable use of these resources that bring development to a lot of people,” says Vivienne Solis Rivera, a biologist with CoopeSoliDar.

The NGO is working in Barra del Colorado to build the community’s capacity to reclaim their licence. That means research, workshops, getting organised to have a voice in policy discussions — work that Solis Rivera says in recent years has had a boost from a new addition to the toolbox: a set of International Guidelines on Securing Sustainable Small-Scale Fisheries adopted by the UN’s Food and Agriculture Organisation (FAO) in June 2014.

The product of a long consultation with over 4,000 stakeholders from over 120 countries, the guidelines are “the first international instrument dedicated entirely to the immensely important — but until now often neglected — small-scale fisheries sector”, according to FAO. They emphasise the rights of artisanal fishers and offer guiding principles for governance and development of the sector.

Costa Rica is by no means unique in overlooking small-scale fisheries. But FAO believes it is the only country to make the guidelines, which are voluntary, a part of its national development plan. This makes it a case the UN agency is keen to watch.

The effort has been controversial, going head-to-head with the country’s strong drive for conservation that has seen over a quarter of its territory designated as protected land.

“There is a real conflict with the environmental agenda,” Solis Rivera says, pointing out that high-profile campaigns have tipped the scales considerably. She believes the guidelines have added a crucial counterweight to that: for CoopeSoliDar and the national fisheries management body, INCOPESCA, having them in hand has meant the community’s concerns get more weight in policy. They give small fishers a presence; and this, she says, makes them disruptive.

According to Nicole Franz, a fishery planning analyst who leads FAO’s work on the guidelines, such conflicts aren’t unusual. “We do see that at times there are tensions”, she says, citing a lack of dialogue between the agencies and NGOs leading the different agendas. Her hope is that the guidelines offer a “basis for constructive collaboration”.

At a meeting convened by FAO last year at the Rockefeller Foundation’s Bellagio Center in Italy, delegates from around the world agreed to work towards indicators to monitor implementation of the guidelines through pilot projects.

Solis Rivera, who took part in the meeting, believes the guidelines can make a difference by “concretizing” a range of issues relevant to policy that affects small fishers. “When the guidelines were approved [in Costa Rica], we were able to really get a tool that could be used to provide more inputs of the need of this approach that considers human rights as the main backbone of conservation,” she says.

The fishermen who take their boats out a few kilometres away from Barra del Colorado, just where the mouth of Rio Colorado meets the Caribbean sea, catch only the amount of shrimp they can sell to middlemen in the area, plus a small percentage each for their families.

They ‘know’ that their nets don’t drag along as much fauna as other trawlers. Yet it takes studies to persuade Costa Rica’s government — and that’s what the community has set out to do, with help from CoopeSoliDar.

Solis Rivera says the guidelines have helped secure the time and money needed to do the research. Since February, through a temporary ‘research licence’, the men have continued to fish legally while gathering information about the sustainability of their practices.

That licence is due to expire soon. At a meeting last week, the community heard that early results of a study commissioned by CoopeSoliDar are promising.

Read here the original version of the article, in scidev.