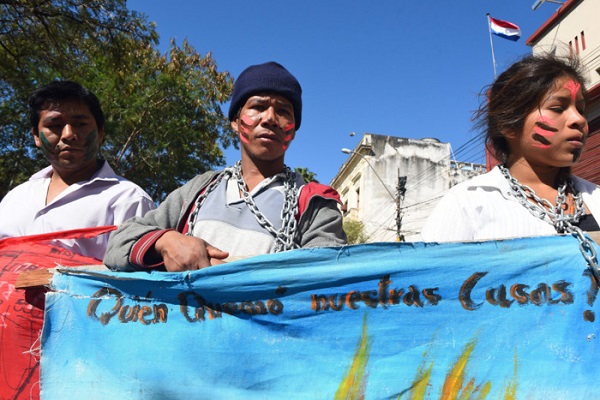 Jejytymiri indigenous people demonstrate in demand of their territorial rights in front of the Congress in Asunción, Paraguay. (c) Norberto Duarte/AFP/Getty Images

Paraguay is home to vast swathes of wild land — forests, savannas, mountains — but over the past 20 years, it’s lost huge amounts of that. Agriculture and development have deforested 9 million acres (roughly the size of the Netherlands) in Paraguay since 2001, the majority of it to enterprises like soy and cattle. But there are also people living on this land; over 100,000 Paraguayans identify as fully indigenous, with varying types of claims to this territory. Figuring out exactly who has a claim to the land, who has the right to use it, and what it’s being used for are complicated questions. One answer might come in the form of a digital map called Tierras Indigenas.

The indigenous peoples living in rural Paraguay are diverse, with about 20 different ethnic groups speaking different languages and living in different ways, ranging from generations-old villages to groups living in voluntary isolation. The status of their land rights can be chaotic: old claims in a drawer in a government building somewhere, verbal agreements never sent to the government, unofficial titles, all kinds of stuff. “If somebody wanted your land for soybeans or cattle, and you didn’t have any legal means to get your land mapped, to show where you were, much less attorneys, it was hard to combat that,” says Ryan Sarsfield, the Latin America commodities manager of Global Forest Watch, which provided the platform to build the map. Global Forest Watch is a project from the World Resources Institute, and is an application that monitors forests around the world in real time.

“At present, most of the lands and territories of the indigenous peoples and communities are not represented in official maps and, as a consequence, are invisible to the state itself and to all sectors of nonindigenous society,” says Hipólito Acevei, the president of the Federation for the Self-determination of Indigenous Peoples (FAPI), which manages and maintains Tierras Indigenas.

Indigenous communities are excellent land stewards, with research showing that indigenous-controlled land experiences two to three times less deforestation than agribusiness-managed land. But it can be hard to compete with a wealthy company that wants to expand its farming or ranching land. Agreements are made in ways that massively benefit agribusiness at the expense of smaller communities; sometimes the status is just unclear, and farming will begin without clearing the rights first. Violent land-grabbing, says Sarsfield, is less common now than it used to be, but is not unheard of.

In December 2017, when Tierras Indigenas launched, Global Forest Watch already had a mapping platform, called Map Builder, which Sarsfield describes as being a bit like Google Earth, but with more detailed information. From his work with agribusiness in Paraguay, Sarsfield already knew that the availability and clarity of land-use information was a huge problem, not just for indigenous peoples but also for private industry. Global Forest Watch was already engaged in mapping the world’s forests, measuring deforestation and fires and encroachment of cities. But what about information for the people who already lived there?

This particular map was made in association with FAPI, which took all of this disparate data held by the different groups and combined them with on-the-ground reporting, data from academia, government files, and some higher-tech information. FAPI, during meetings with these communities, collected all the information it could find on who owns what, who might own what, and what’s being done with the land. Global Forest Watch is, as its name suggests, a pretty good source of forestry data, which it largely gets from satellites. Data on fire comes from NASA. “The idea was to join together the efforts of all these individual indigenous communities, take the maps that they’ve already made, get the best government data we can — because there was a lot of government data — and put it systematically into a system that they manage,” says Sarsfield.

All of that information comes together in the map, which makes it easy for anyone to check an area and see exactly what’s going on there. The map tells you who lives in the area, what languages they speak, how many families there are, and what the legal status of any land claim is, among other information.

“The communities are not invisible, and are visible through a space of and for the natives where they are accompanied by their advisers and institutions of their confidence,” says Acevei. Aside from all the possible legal, economic, and environmental benefits of the map, it also answers one of the most basic questions a community can have about itself: Where are we?