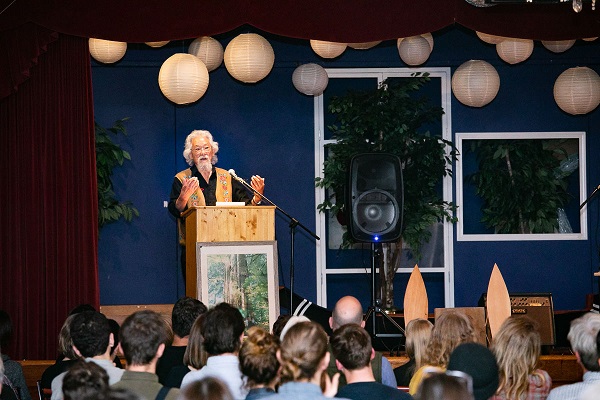 By Eli Enns, Regional Coordinator for North America
This year, 2019, marks the 35 year anniversary of the Wah’nah’juss Hilth’hooiss (Meares Island) Tribal Park declaration. In 1984, Nuu-chah-nulth peoples stood shoulder to shoulder with social/environmental justice advocates from Tofino British Columbia (and beyond) in Canada to stop the clear cut logging of the sacred ancient cedar “Gardens” of MearesIsland. 35 years later, those trees are still standing and Tla-o-qui-aht (1 of 14 Nuu-chah-nulth tribes)Tribal Parks are still going strong with 3 recently declared Tribal Parks.
The 35 year anniversary celebration kicked off in Victoria BC on April 17th with a sold out event featuring talks by Tla-o-qui-aht Chief Moses Martin, Haida ally Miles Richardson, and well known Canadian scientist/broadcaster/author – Dr David Suzuki. Celebrations will continue throughout the year with an awareness and support raising campaign spear headed by The IISAAK Olam Foundation” (www.Meares35.ca) in Solidarity with many Indigenous Nations and civil society organizations across Canada.
In light of the recent United Nations report on biodiversity loss, the message of the 35 year anniversary is one of hope, celebrating what’s possible if you “Know who you are, believe in yourself and be bold for Future Generations”.
Klecko Klecko (deep sense of gratitude)!
Find here some excerpts of the celebration :

Take a step back and discover the Meares Island Tribal Park: