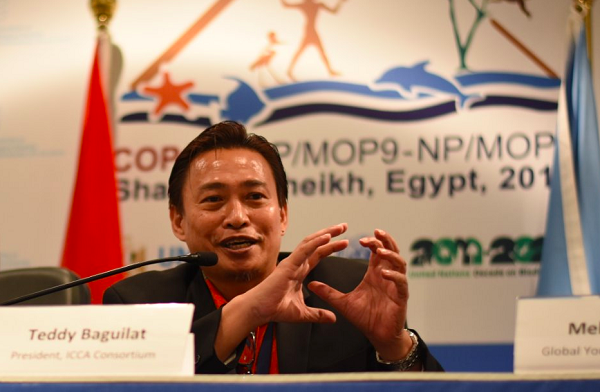 The year 2018 will be remembered for the Consortium as the year of the sudden and untimely passing of our beloved first President, Dr Mohammad Taghi Farvar. Taghi was a most experienced, fearless and wise guide for our association, a guarantor of its vision, a living embodiment of its heart and soul, a reminder of its roots and history in indigenous and community cultures throughout the world. Many of us in the Consortium have not yet come to terms with his loss – personally and for the institution. We are still in process. But we all know we are stronger for having shared part of the journey with him and determined to continue our common work.

Soon after the demise of Taghi, in July 2018, our Elder Dave de Vera stepped-in to act as interim President until the General Assembly in November. The Strategic Plan of the Consortium had already foreseen the need for a Leadership Transition Plan and commissioned a Search Committee, which worked throughout the summer of 2018 to finalise the ToR for the President, get out an open call and identify and interview candidate(s). We were successful in that and Teodoro Brawner Baguilat—an indigenous Igorot leader, member of Parliament and first signatory of the ICCA Bill for the Philippines— was finally elected as second President of the ICCA Consortium at our General Assembly in Bishoftu (November 2018).

Throughout 2018, the Consortium continued to provide support to ICCAs-territories of life at local, national, regional and international levels by advancing both the ICCA Global Support Initiative (GSI) and a few other companion projects. As part of that, it highlighted “emblematic ICCAs-territories of life” at local level, providing support to more than 40 countries (not all GSI priority countries), facilitated regional capacity exchanges in Africa, Asia and Latin America and continued to follow closely relevant international policies. For the latter, it contributed to technical advances of the Convention on Biological Diversity before, during, and after CBD COP 14 in Sharm-el-Sheik (December 2018). A most positive outcome of COP14 was the decision on protected and conserved areas, which includes the most progressive text to date on governance and equity, as well as the first-ever definition of “other effective area-based conservation measures” and guidance on identifying those. These decisions have been nurtured by the Consortium through years of work, including direct advocacy with the Parties to the CBD and its Secretariat. They represent major gains in international biodiversity law, and the ICCA Consortium is proud to have participated in the process to develop the definitions and guidance that led to them. etc.