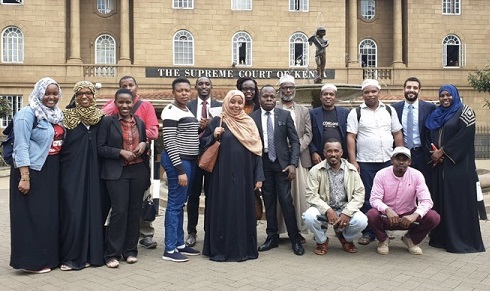 “It really is a great day for the people of Lamu…Theirs was a cry for their voices to be heard, for their concerns to be reflected so that this wasn’t a situation of people being anti-development.” – Mark Odaga, Natural Justice

Judgment handed down on Wednesday, 26 June 2019, by Kenya’s National Environmental Tribunal was met with jubilation and relief by the communities of Lamu – it set aside the issuance of a licence by the National Environmental Management Authority (NEMA) to Amu Power for the construction of the Lamu Coal-fired Power Plant. The coal plant would be the first in Kenya.

This judgment follows a challenge brought by Kenyan civil society organisations, including Natural Justice, on the basis of a flawed Environmental and Social Impact Assessment process.

Natural Justice have journeyed with the people of Lamu  since 2016, when it became apparent that NEMA had issued the license for the plant. We were part of the legal team and assisted with developing the arguments and writing the submissions.

The judgment found that, “The EIA study and report thereof were thus never subjected to proper and effective public participation that would have covered most of the grievances now raised in this appeal. As we have found earlier, [NEMA’s] approval of the ESIA Study and the consequent issue of the ESIA Licence and its conditions failed to meet the requirements of the law.”

The judgment directs Amu Power to undertake a fresh ESIA study, should it wish to continue with the development of the power plant.

Support for the judgment has come from many corners of the world, as the judgment comes at a time when we have seen the fight against greenhouse gas emitting technologies, like coal, growing worldwide.

We congratulate our partners in this process, including Save Lamu, the Katiba Institute and the organisations who are part of the deCOALonize campaign.

There are thirty days for Amu Power to appeal.
You can access the judgment: 26 June 2019 Judgment_NET_Save Lamu.