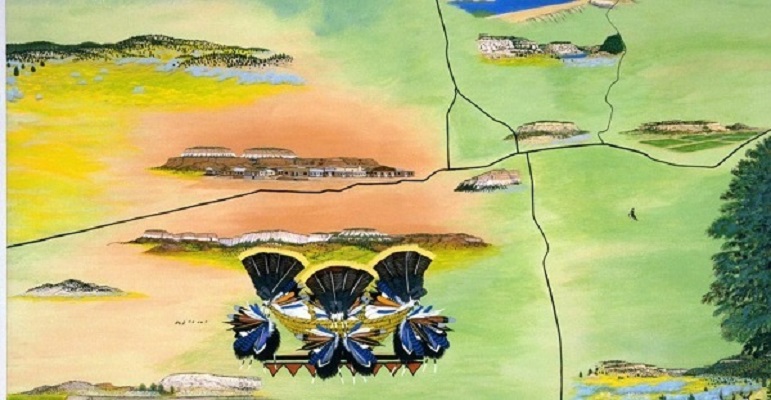 By Maria Faciolince, Oxfam
Directly extracted from this article on Oxfam website

Maybe you’ve already read one of the recent #PowerShifts pieces on how the Waorani are using maps in court to uphold their land rights. Pretty powerful, right? For a while now, I’ve been increasingly curious about collective cartography as a concrete method and tool that can encourage participation, generate collaborative knowledge, and politicise change processes as it visualizes power relations. So this resources compilation offered a perfect excuse to delve more into this fascinating and never-ending line of work. In contrast to the imposed idea of North and South,
the motto “Your North will be our South” became
the emblem of many claims in Latin America.
Credit : Uruguayan writer and artist Joaquín Torres García (1941, 1946).

Why are maps powerful? Because cartography orders realities. Drawing maps has been one of the main tools available throughout history for dictating power over a given geography and its people. So much so, that official (Eurocentric) cartographies not only of physical, but of social, capital and knowledge landscapes are taken for granted as natural and unquestionable realities – ones that have ordered the world into centres-peripheries, norths-souths, developed-developing geographies.

In this way, “our representations of the world are extremely important when defining a critical position in respect to it”. Dissecting and rethinking these ways of ordering the world then becomes an essential step as we think through tools of social change.

Critical cartography aims to understand the connections between geographic knowledge and power, and propose a process to reverse this linkage, illustrating forms of injustice and serving as a tool to activate social change. The critical use of maps has been reclaimed by various communities and projects in the pursuit of upholding the rights of populations and their access to basic needs, as well as generating the knowledge base needed from which participatory strategies of change can emerge.

At its simplest, collective mapping is a tool that combines local knowledge with other data and geographic technology. These methods always include the direct participation of local people throughout the cartographic process – in the planning, design and final product phases that will reflect the collective experience of the group that generated it. Many distinct terms fall under this umbrella of methods, such as participatory cartography, counter-mapping and community cartography. Although there are differences between the initiatives in terms of applications and users, the theme that links them all is that the process of mapping is carried out by a group of ‘non-specialists’ (aka just people) who share an aim.

For this very reason, the general admonishment for “tech innovations” – that we shouldn’t just rely on them instead of engaging with politics – doesn’t always hold here. Participatory cartography can be a really powerful tool precisely to understand and engage with power in a given context. The aim is to use cartography to create new visions of historical representation and possibilities for direct participation. A reference point for the work of collective cartography is Iconoclasistas, an Argentine group led by University of Buenos Aires professor Julia Risler and graphic designer and comic strip author Pablo Ares. They envision mapping as tools that enable the sharing of knowledge which can later be used for the critical visualisation of the most pressing local problems in a given area, and identifying their responsible agents, connections, and consequences. Using maps as a medium transcends language and educational barriers, and can serve as a legal tool to lend legitimacy to complaints to local governments and industries. The work of participatory mapping links up to other methods. As Iconoclasistas expressed it in their manual of collective mapping : “Designing collective cartographies stems from a deep-rooted tradition of participatory work. Involving different types of experiences and results, this tool has been strengthened by the work of social organizations, NGOs, and foundations, in urban as well as in rural areas. Technological availability and access to georeferencing tools (like GPS or GIS) have invigorated and widened this process.”

Here’s a great podcast where you can hear more about how they create visual devices that can communicate scenarios of injustice and inequality and provide tools for understanding complexity. In their long trajectory of holding collective mapping workshops, Iconoclasistas have put together a brief workbook on collective mapping, which includes some pointers for those interested in organizing a workshop within their own communities and action spaces.

The International Society for Participatory Mapping (ISPM) is another hub for this type of work. Check out the map of projects on their platform, where you can find some ongoing mapping projects across the world. They also have a handy glossary of key terms related to participatory/collective mapping.

Participatory mapping can look like many things: a repository or database, a collection of territorial stories, graphics that blur ‘objective’ and ‘subjective’ realities, paintings, an interactive atlas, a web of networks/alliances, and the list goes on.

When putting together this edition of #PowerShiftsResources, I put out a call on Twitter asking the hive mind about interesting collective mapping projects, and was happily surprised at the diversity of projects people suggested! I’ve included responses and added some other examples below:

Some very interesting mapping projects are taking place, led by Secoya, Siekopai and Waorani communities in the Amazon, in collaboration with Digital Democracy, Alianza Ceibo and Amazon Frontlines. One of these is the Waorani Mapping Project which began in 2015, when the Waorani faced mounting threats to their livelihoods and lands due to ongoing oil operations. The project has collectively mapped over one million acres of Waorani territory, and produced powerful maps the communities are using widely in their campaign against oil concession “Block 22”. Check out this interactive map telling the story of their resistance (it takes a moment to load all the maps but then should scroll through zooming in and out).

The technology developed by Digital Democracy for this is called Mapeo: an open source, offline map editor. Mapeo leverages the same easy-to-use editor and flexible data structure as OpenStreetMap. It is powered by a peer-to-peer database that enables offline collaboration and control over data sharing. Here you can see how Mapeo and other digital tools are being used across a variety of issues. LandMark: an interactive platform to provide maps and other critical information on lands that are collectively held and used by Indigenous peoples and local communities, designed to help protect their land rights and secure tenure over their lands. You can see some of the maps here. These two publications on participatory mapping by ANGOC jointly published with the Philippine Association for Inter-Cultural Development (PAFID) have been widely used by various communities in the region to advocate for land rights: A Resource Book on Participatory Geographic Information System (PGIS) for Land Rights Advocates (volume 1, volume 2).

In terms of other events, the Indigenous Mapping Workshop, held annually, is a great place where Indigenous peoples from North America can go and learn a whole host of tools, make connections and share their story. This year it is being held in Inuvik – next year there is a big chance it will be held in Colombia!

Mappingback: a great initiative that tries to pull together projects from around the world that map Indigenous lands. It’s still growing, but some fantastic work can already be found there.

The ICCA Registry:“ICCA is an abbreviation for territories and areas conserved by indigenous peoples and local communities. ICCAs achieve conservation of species and the natural environment, together with other social and cultural objectives.” EJAtlas: cartography of socio-environmental conflicts around the world. The EJAtlas (Environmental Justice Atlas) documents and catalogues social conflict around environmental issues. “The EJ Atlas collects these stories of communities struggling for environmental justice from around the world. It aims to make these mobilization more visible, highlight claims and testimonies and to make the case for true corporate and state accountability for the injustices inflicted through their activities.”. They’ve made maps about seed laws and women-led resistance to extractive projects, among others. Read more about the project here.

Atlas of Transformative Cities: a mapping of urban initiatives that features “transformative practices and responses taking place at municipal level worldwide”. The Atlas of Utopias aims to facilitate the wider dissemination of lessons and inspiration from such practices “to popularize and share their experiences of building solutions to our planet’s systemic economic, social, political and ecological crises”. Keep your eyes open for new additions coming out this week …!

Mapping in the humanitarian setting

The Missing Maps project: a collaborative initiative to provide open source maps of the parts of the world most at risk of humanitarian crises in OpenStreetMap. The maps are collectively made through MapSwipe, an app which allows people to identify the location of ‘vulnerable communities’ in their surroundings based on satellite imagery. Highly recommend you check out their blog with some really cool mapping projects.

Cartography as repositories of cultural memory

Maps can also be a way to tell stories about the land and cultural histories. Read and see how the Matawai of Suriname are using a new open-source geostorytelling app to create an extraordinary repository of traditional knowledge through oral history storytelling. The technology behind this is called Terrastories. A really beautiful and important project.

I’ve shared this one before in the ‘Reclaiming Representation’ resources, but here it goes again as a refresher. Read about how Zuni artists are creating maps that bring an indigenous voice and perspective back to the land, countering Western notions of place and geography. In this list, I couldn’t forget the formidable Beehive Collective, an activist arts collective dedicated to “cross-pollinating the grassroots” by creating collaborative map-drawings for use as educational and organizing tools. The incredibly detailed graphics tell the story of a region through a polyphony of voices and perspectives: “We work as word-to-image translators of complex global stories, shared with us through conversations with affected communities.”  Check out their map of the ecology of Meso-American social movements and grassroots change agents.

Other initiatives to keep on your radar:

In an effort to unstick the binaries of North/South, a common map of ‘peripheral European struggles’ is being developed out of the Peripheralizing Europe meeting in 2015. A key aim is to establish pool of knowledge so the east becomes reference point for itself within ‘the North’.

Finally, keep checking back on the Violence Lab within the Polis Project in India, which is mapping statelessness and violence in the country. Although they haven’t published anything final, you can follow their ongoing work through Twitter.

Do you have any of your own suggestions, or ideas? Add them in the comments on Oxfam website so we can keep building up these resources collaboratively.