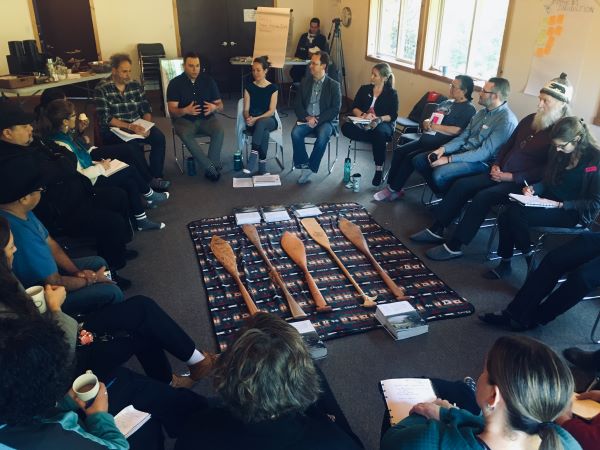 The IISAAK OLAM Foundation is pleased to announce the inaugural launch of an online Reading Circle to increase knowledge and understanding of Indigenous Protected and Conserved Areas (IPCAs) and to promote their establishment across Canada.

The Reading Circle draws together 30 participants from indigenous nations and governments, the Canadian government, provincial/territorial governments, conservation organizations, and academia. The goal is to promote the implementation of IPCAs in a manner consistent with the vision and recommendations of the Indigenous Circle of Experts (ICE) in their 2018 report We Rise Together: Achieving the Pathway to Canada Target 1 through the creation of Indigenous Protected and Conserved Areas in the spirit and practice of reconciliation. Watch the summary video about the ICE process, report, and recommendations here.

“The purpose of the IISAAK OLAM Foundation is to mobilize knowledge and build capacity for the protection and conservation of biocultural diversity. This Reading Circle on the ICE report for the Pathway to Canada Target 1 will help various audiences better understand one of the key resources for achieving this purpose, including the role that they can play in supporting the establishment of IPCAs. We hope that the Reading Circle also builds community and allyship,” said Eli Enns, co-founder of the IISAAK OLAM Foundation, former ICE co-chair, and a citizen of Tla-o-qui-aht Nation in Nuu-chah-nulth Territory, British Columbia.

In 2010, under the United Nations Convention on Biological Diversity (Aichi Targets), Canada committed to protect at least 17 percent of terrestrial areas and 10 percent of coastal and marine areas by 2020. In the December 5, 2019 speech from the throne, the federal government increased this commitment to 25% of both terrestrial and marine ecosystems by 2025.

IPCAs are increasingly seen as an indispensable component of Canada’s efforts to meet these commitments. On August 19, 2019, the federal government announced funding for 27 IPCA projects across Canada through the Canada Nature Fund, and the momentum continues to grow. During Question Period last week, Prime Minister Justin Trudeau stated that the government is “working with indigenous partners to develop and support indigenous leadership in conservation through indigenous guardians programs and to establish new Indigenous Protected and Conserved Areas. We are moving forward with ambitious plans to conserve 25% of Canada’s land and 25% of Canada’s oceans by 2025.”

The IPCA Reading Circle will support indigenous nations to implement these IPCAs in ways that strengthen and uplift indigenous governance on the land. One example is the new 600-square kilometre Qat’muk IPCA being developed by the Ktunaxa Nation and their partners in southeast BC’s Purcell Mountains. Members of the Ktunaxa Nation Council and their neighbours from the Shuswap Indian Band are participants in the IPCA Reading Circle.

Efforts to empower indigenous-led protection of traditional lands and waters, which include sustainable economic development alternatives based on indigenous economic theory and practice, are all the more urgent in light of the forced removal of Unist’ot’en Clan leaders, land defenders, and matriarchs from their traditional territories in northern British Columbia over the past week.

Most IPCAs declared in the past two years have been in British Columbia and in Canada’s North. However, there is also a great interest and need for these models in other parts of Canada, and IISAAK OLAM is pleased to welcome Reading Circle participants from Alberta, Ontario, Québec, and Nova Scotia as well.

The IPCA Reading Circle will utilize online videoconferencing technology to promote interactive discussion among participants. Sessions will be facilitated by Andrew Paul, Research and Engagement Coordinator with the IISAAK OLAM Foundation.