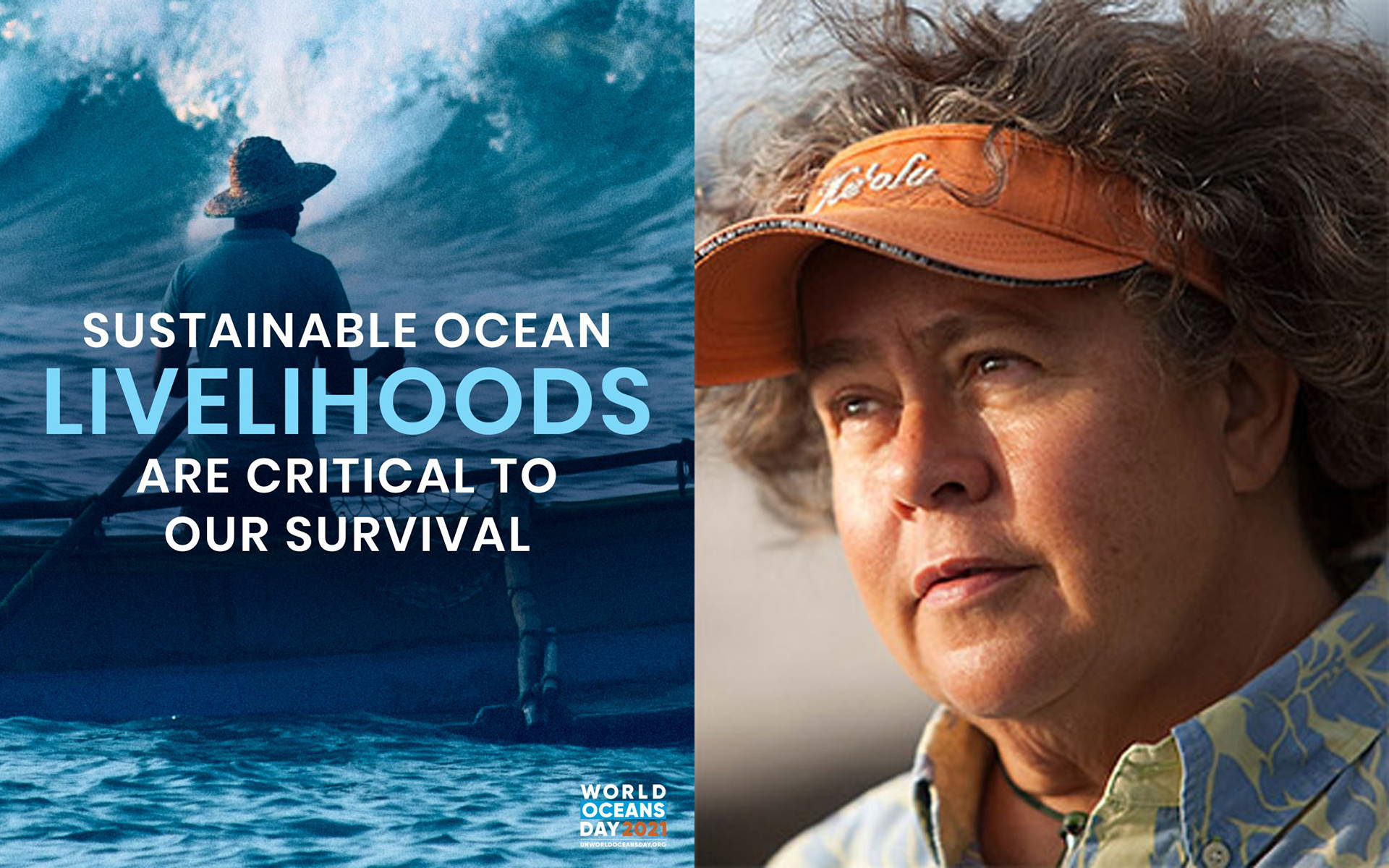 On World Oceans Day, ICCA Consortium Members took part in global events that amplified Indigenous and local community voices for sustaining and defending the bio-cultural diversity of our oceans

On World Oceans Day 2021, over 260,000 people from all over the world joined the virtual celebrations organized by the UN. The day-long event was produced by the Division for Ocean Affairs and the Law of the Sea of the Office of Legal Affairs of the United Nations, in partnership with the non-profit organization Oceanic Global.

This year, the theme of the day was The Ocean: Life & Livelihoods! While it is normally held at the UN Headquarters in New York, due to COVID-19 the 2021 event was the second-ever digital rendition, accessible to the global public.

This moderated panel discussion highlighted Indigenous and local solutions to challenges in ocean governance and management, particularly related to coastal and marine fisheries. Hannah discussed Hawai’i’s traditional land-use system Ahupuaʻa, where native communities efficiently governed and sustained all types of ecosystems, from the mountains to the ocean. She elaborated on the recent successes in reviving Indigenous governance in Hawai’i to restore and manage nearshore ecosystems and fisheries.

Hannah illustrated the Indigenous wisdom behind temporary fisheries closure and other customary practices. “We are choosing to exercise the right to rest as a traditional customary practice. So when we can approach our seascapes with that sense of rest, it is an important part of any lifecycle,” she said. She also talked about how the community is facilitating intergenerational learning about the Indigenous way of life and food systems in Hawai’i.

In the context of unsustainable maritime economic activities as part of the emerging blue economy, she explained that the movement for sustaining and defending aquatic territories needs multi-pronged strategies, from strengthening community institutions to participating in legal processes.

In the run-up to World Oceans Day, Blue Ventures (Member) and the ICCA Consortium co-organized a webinar titled Impact of 30 by 30 on Coastal Communities. It was part of the Small-scale Fisheries Open House hosted by the research network Too Big To Ignore (TBTI). Speakers from Blue Ventures, MIHARI Network (Member), and the ICCA Consortium discussed the socio-economic issues related to “30 by 30”, the new area-based conservation target proposed for the post-2020 global biodiversity framework.

Steve Rocliffe, Blue Ventures’ Senior Technical Advisor, moderated the webinar. Describing the 30 by 30 campaign, Steve said that protecting thirty percent of the land and ocean by 2030 is a hugely ambitious global undertaking. “We are talking about doubling the current land area under protection and quadrupling the ocean areas. This would make 30 by 30 the most extensive land governance project in human history.”

READ MORE: ‘30 by 30’ is a distraction, keep the focus on Indigenous and locally-led holistic ocean stewardship Blue Ventures’ National Management Advisor for Fisheries and Marine Protected Areas in Madagascar, Tahiry Randrianjafimanana presented the practical challenges and consequences of 30 by 30 for coastal communities and made several recommendations for safeguarding rights and defending the wellbeing of communities. “The 30 by 30 proposal wants to address biodiversity loss and climate change, but in reality, this vision will deal with practical feasibility and consequences to communities,” said Randrianjafimanana.

Tahiry presented data about and explained why marine protected areas imposed by governments are ineffective tools for ocean protection. He said that Indigenous peoples and local communities play important roles in effective ocean conservation, but 30 by 30 “in its current form” is a socially unacceptable and operationally non-feasible approach because it does not consider human rights, food security, and the stewardship of communities. Prisca Ratsimbazafy, a database officer at the MIHARI Network, delivered her presentation about how local communities lead the governance and management of Locally Managed Marine Areas (LMMAs) to restore their ecosystems and food security. She presented information about how LMMAs are sustaining ecosystems, protecting biodiversity, and governing fisheries in 17,000 square kilometers of Madagascar’s continental shelf in the Indian ocean.

MIHARI is an acronym for MItantana HArena and Ranomasina avy eny Ifotony, which translates to marine resources management at the local level. The network brings together associations led by small-scale fishers and is an association of more than 219 fishing communities and over eighty LMMAs, with twenty-five supporting NGO partners.

Prisca said, “The LMMA approach is effective and valuable in achieving marine and coastal conservation goals like 30 by 30.”

READ MORE: “Madagascar: A national analysis on the status of territories of life”

About the upcoming post-2020 global biodiversity framework, he said that rather than pushing for more exclusionary marine protected areas, the focus should be on supporting Indigenous peoples, local fishing communities and coastal communities to secure their collective territories and areas, strengthen their self-determined governance systems, and sustain their cultures and ways of life on their terms.

He added that human rights-based financing should be developed as a key lever for equitable and effective implementation of global commitments, including on biodiversity, climate, and sustainable development.