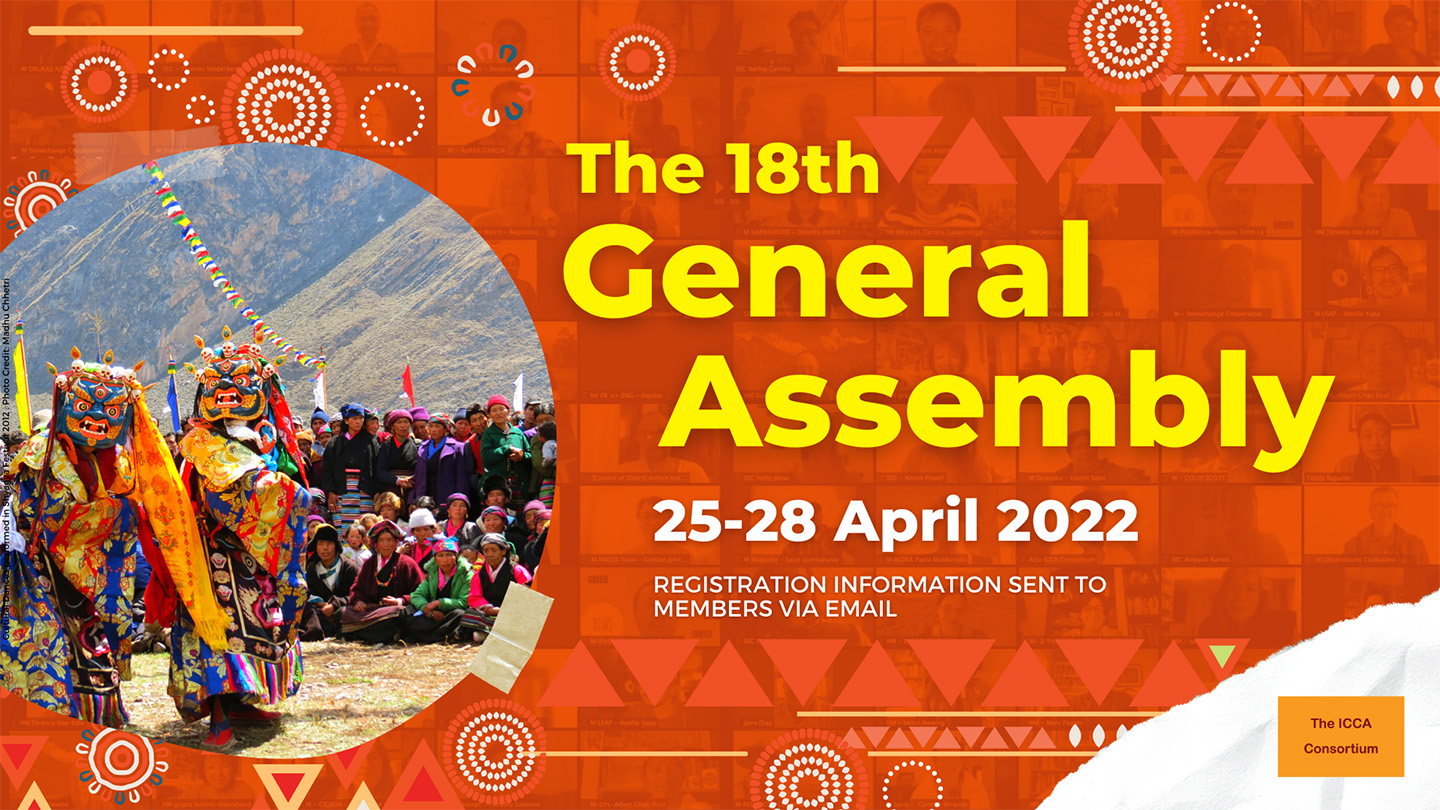 The General Assembly will be conducted on Zoom with simultaneous interpretation in at least English, Spanish, and French. Participants are kindly requested to register using the link provided to all Members and Honorary members via email. If you have not received this email, please contact our Administration Coordinator (alison.p [at] iccaconsortium.org).

More information will be posted soon here about the agenda, preparatory meeting announcements, and calls to action ahead of the General Assembly.

Several Council positions are open for nominations ahead of the 18th General Assembly, with nominations due by 28 March 2022. Refer to Section 2 of the Governance Procedures for more information about the Council and Council nomination and election procedures.

The General Assembly may consider nominations and elections for any Council positions that are vacant or when a current Council member has served a full 3-year term. To stand for election for a Council position, a person must be nominated by: (a) a minimum of two existing ICCA Consortium Members in good standing; or (b) one Member in good standing and one existing member of the Council. The person standing for nomination cannot nominate themselves. Members of Indigenous Peoples and local communities (especially those who are bona fide custodians of territories of life), women, gender minorities, elders and youth are particularly encouraged to stand for nomination to strengthen diversity, representation and intergenerational relations in the Council.

The following Council positions are open for nominations ahead of the 18th GA. ICCA Consortium Members are warmly encouraged to submit nomination forms to the Administration Coordinator as soon as possible and no later than 28 March 2022.

Important notes for the membership

Note about region-specific positions in the Council: In accordance with the Governance Procedures (Section 2.4.1), nomination of a regional representative in the Council shall be done by consensus of all Members in that region, ideally at a regional assembly or through another suitable decision-making platform that provides an opportunity for all Members and Honorary members in that region to contribute constructively.

Note for Members about being in good standing to nominate someone for the Council: Refer to the Membership Policy and Procedures (Part 2, Section 2.2.ii) to learn more about being “in good standing”, including contributing to the 2020 membership review and at least one form of voluntary collective action in the past year.

The following people were nominated for Council positions and are standing for election during the 18th General Assembly:

Their nominations were received in accordance with the process outlined below.

All current Members and Honorary members of the ICCA Consortium have been invited to access a private Loomio group where they can discuss the nominees and build consensus ahead of the General Assembly, as a complement to the live election process during the Assembly. If you are a Member representative or Honorary member and did not receive an invitation to access Loomio, contact alison.p@iccaconsortium.org.