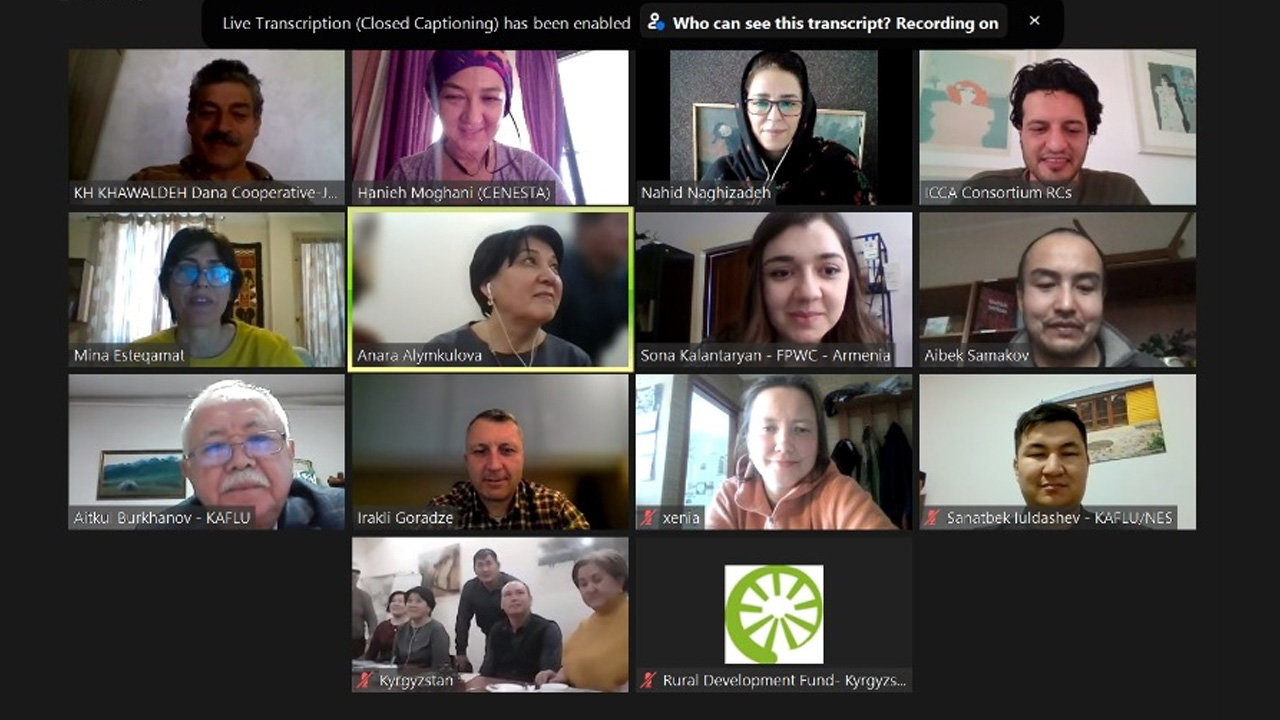 Members and Honorary members of the ICCA Consortium from Kyrgyzstan, Armenia, Iran, Jordan, and Georgia attended the meeting

Members and Honorary members of the ICCA Consortium from Kyrgyzstan, Armenia, Iran, Jordan, and Georgia attended the meeting

By Ali Razmkhah
Regional Coordinator for Central and West Asia on behalf of CENESTA, ICCA Consortium

The 2nd ICCA Consortium regional assembly of West and Central Asia and the Caucasus was held virtually 24-25 February 2022. The Centre for Sustainable Development and Environment (CENESTA) facilitated the event. The regional assembly was made possible with the cooperation of the Rural Development Fund (RDF) and the technical support from the global secretariat of the ICCA Consortium.

The assembly was inaugurated with a spiritual moment showing the respect and sense of belonging to nature and mother earth by the traditional ritual of burning juniper‌ by Kuluipa Akmatova (RDF) and continued with Holly Jonas‘s message, the Global Coordinator of the ICCA Consortium.

After the introduction of participants, Sona Kalantaryan (FPWC) presented an overall review of the 1st regional assembly, actions, and decisions expressed. Then, through interactive communication, participants shared and discussed what their territories of life have gone through since the 1st regional assembly and what key initiatives and activities were carried out in the region to support territories of life.

The working group discussions resulted in the identifying the following priorities:

The second day of the regional assembly opened with a ritual moment by Sutej Hugu (Regional Coordinator for East Asia, ICCA Consortium) in memory of Dr. Taghi Farvar. Then he shared their experience regarding the regionalization process.

After Hugu’s presentation and some discussions, Sanatbek Luldashev (KAFLU) facilitated the “regionalization process in the West and Central Asia and the Caucasus” session. Participants raised their points and thoughts regarding the challenges, opportunities, initiatives, and collaborative works of Members in the region. The discussions’ cornerstone was the common understanding of the necessity of the regionalization process for improving the interaction among Members and developing a network to learn from and support each other.

Continuing this discussion, Mina Esteghamat (ZIPAK) opened the floor to discuss the “regional cooperation; initiatives and road map” by discussing the framework Members want to pursue regional cooperation. Initially, participants discussed the importance of forming a council and its efficiency for the future. In this regard, the importance of functionality than representation was mentioned. Therefore, establishing various working groups or ad-hoc teams was considered to improve and develop regional cooperation. People believed that they could be more helpful than an unequivocal imitation of a global framework such as a council-based system in advancing practical issues. However, the local communities’ inclusion and participation and the issue of language differences are still significant challenges.

In the end, participants concluded that drawing up a roadmap with the help of regular meetings will help Members to meet future needs. Therefore, with Nahid Naghizadeh’s facilitation (CENESTA), participants discussed creating working groups to prepare a manifesto and a regional road map.

West and Central Asia and the Caucasus 2019 Regional Assembly

Iran: A national analysis on the status of territories of life