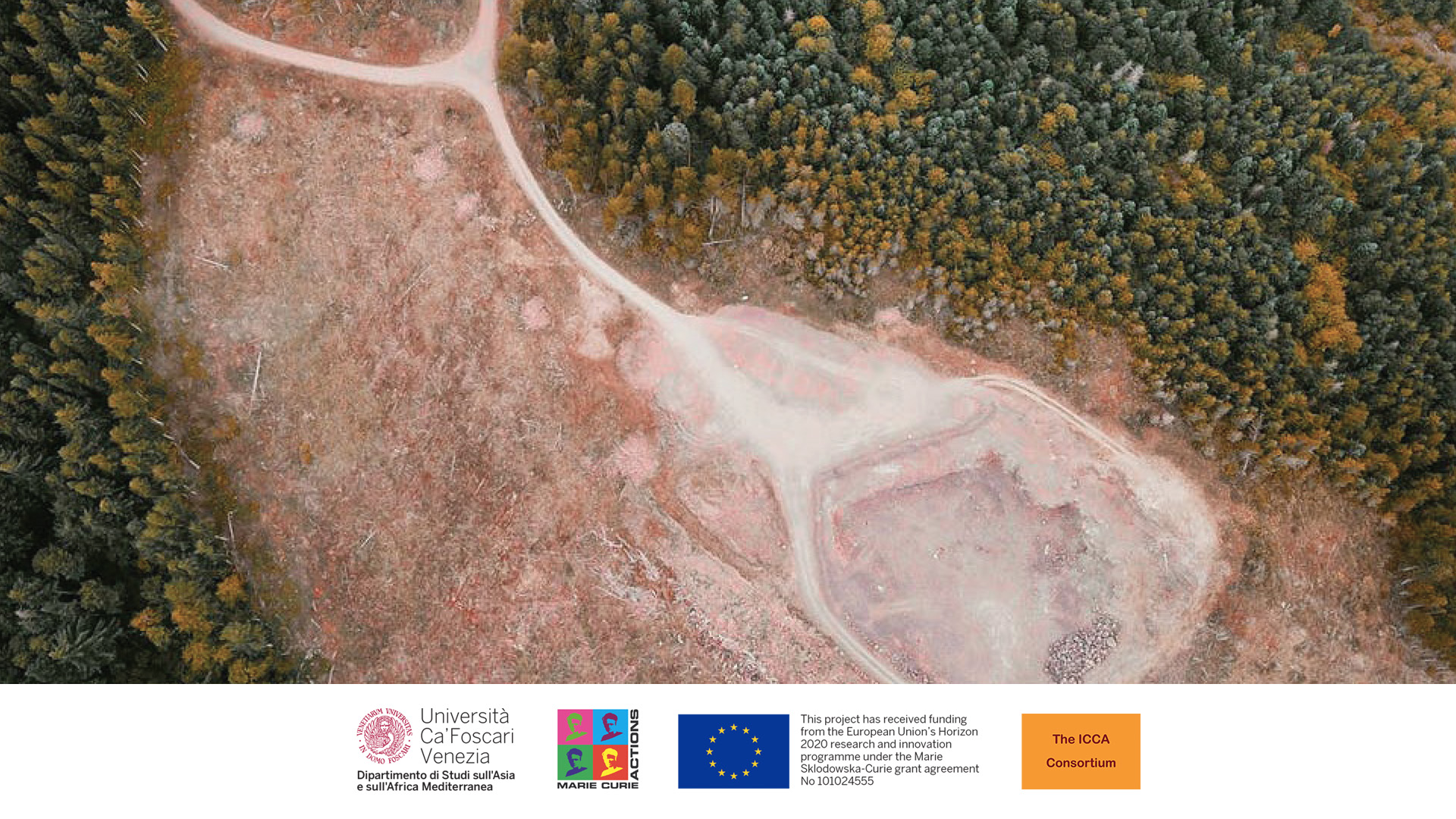 A recent workshop co-organized by the ICCA Consortium brought together a community of academicians, conservation practitioners, and community leaders to question and assess the social-ecological logic and impacts of new financial mechanisms in conservation

The virtual workshop titled “Financialization of Nature, Green Investments and Biodiversity Conservation: Transformative Change or Veneer for the Status Quo?” was held on 14 and 15 April 2022. The workshop was designed as a ‘collateral’ event for the upcoming UN biodiversity summit—the fifteenth meeting of the Conference of the Parties (COP 15) of the Convention on Biological Diversity (CBD). The Department of Asian and North African Studies (DSAAM) of the Ca’ Foscari University of Venice, the CHINGREEN project, and the ICCA Consortium jointly organized the workshop.

It was organized as an informal and complementary space for critical inquiry on the ongoing process of financialization of nature and its socio-ecological implications. The workshop was intended to discuss concrete ways to guarantee the functioning of life-sustaining ecosystems in all their complexities and against multiple current threats.

The workshop brought together a community of academicians, conservation practitioners, and community leaders to question and assess the social-ecological logic and impacts of new financial mechanisms in conservation.

The first speaker of the first panel was Katie Kedward, Research Fellow in Central Banking and Sustainability at the Institute for Innovation and Public Purpose of the Faculty of the Built Environment at the University College London. Katie’s presentation focused on how financial policymakers and institutions approach the environmental crisis and biodiversity loss. She explained how financial actors’ diagnosis of biodiversity loss is linked to processes of the market’s lack of information and mispricing that produce “externalities.” She mentioned that the market’s quantifying strategies could not capture the “unknown unknowns” of the natural world, and they cannot be relied upon to capture all relevant tail risks.

She concluded that central banks and banks’ supervisors should focus their attention on encouraging and employing a prudential toolkit that encompasses reforming institutional relations and recognizing the finance and nature as spatial phenomena highly influenced by the North/South divide.

The second presentation was delivered byProfessorJessica DempseyandAudrey Irvine of theGeography Department at the University of British Columbia. Their presentation started with an overview of the financial mechanisms across all asset classes designed to positively impact biodiversity, such as eco-tourism, Reducing Emissions from Deforestation and forest Degradation (REDD+) schemes, and the carbon market. They highlighted how most attempts to attract private capital to fund biodiversity conservation face persistent limitations with unclear and unproven impacts. They also stated there is little evidence to suggest that the current moment differs from the attempts started in the past thirty years.

They concluded that humanity should start asking what kind of nature-positive global economy is required to achieve by considering who is most exposed to climate crisis and biodiversity risks long related to an uneven form of development and colonialism.

AndreaArmeni, Co-founder, Transform Finance, reflected on how capital affects social justice outcomes and Indigenous communities and what it means when finance is given a role in biodiversity conservation. In his view, the deployment of “green” capital parallels extraction processes and violation of cultural sites and particular ecosystems. Andrea explained how decisions traditionally made in the public sphere become relegated to private actors. Furthermore, it is essential to note that financial decision-makers are not the ones who bear the burden of their decisions, but their decisions impact nature and communities.

Professor Marc Brightman, Department of Cultural Heritage, University of Bologna, started his presentation by asking about financialization and biodiversity. He explained how the current and dominant biodiversity narratives within the policy framework of the Organisation for Economic Co-operation and Development and programmatic definition of sustainable development endorsed by the World Bank, International Monetary Fund, and World Wide Fund for Nature is structured around the idea that “biotic diversity” has had economic value. Even economic dimensions, given that variety, are considered to provide both “insurance” and “investment” benefits as they can guarantee ‘‘the maintenance of options for future generations.”

Presentations and discussions of the first panel.

Professor Christoph Nedopil Wang of the Green Finance and Development Centre at Fudan University gave a brief history and evolution of the Belt and Road Initiative (BRI) as a massive infrastructure development project of the Chinese government, the associated mechanism of BRI, and the overall governance model and explained the initiatives, framework, and mechanism for green BRI and biodiversity conservation.

He pointed out the shift in energy investment from fossil fuel to renewable and more renewable energy investment in 2020 and the complete stop of coal funding in 2021. A new “traffic light” system was implemented in BRI that categorizes all projects based on their environmental performance.

Dr. Jianyu Zhang of the BRI Green Development Institute started his presentation by recognizing the Sustainable Development Goals (SDGs) and the long-standing agreement on sustainable development. He emphasized the opportunities and challenges of BRI in a turbulent world that is far from meeting the SDG targets.

Professor Eugene Simonov of the Rivers without Boundaries Coalition and School of Humanities and Social Sciences, University of New South Wales Canberra, said that the current state of environmental protection and conservation and the international background of capitalism, unrealistic SDGs, China’s strategy going global and the latest war, all putting significant impact and stress on the environment.

He said that civil society prepared a list of sixty projects under BRI that do not meet the environmental performance requirements and there is another risk with China’s financial investment in hydropower, which is still expected to be significant. There is also concern that other countries are competing with China on infrastructure investment, driving the same unsustainable development pattern.

Professor Elia Apostolopoulou of the Cambridge Institute for Sustainability Leadership emphasized the scale and importance of BRI as one of the most significant infrastructure investments in recent decades. One of the critical characteristics of BRI is the combination of extensive infrastructure with urban development, resulting in the significant alteration of the landscape and environment, in both urban and rural places.

Presentations and discussions of the second panel.

Panel: Green investment and the financialization of nature for territories of life of Indigenous Peoples and local communities

The first speaker of this panel was Ashish Kothari, core team of the Global Tapestry of Alternatives and member of the Council of Elders of the ICCA Consortium. He focused his presentation on nature commodification and radical alternatives to this approach. Ashish introduced two significant responses to the various ecological crises by the mainstream system (nation-states, governments, private corporations, etcetera.): top-down governmental protected areas and commodification and financialization of nature, such as carbon trading, ecosystem services, REDD, REDD+, and even the concept of the green economy and, to some extent, the SDGs.

Ashish elaborated on this point that there is more evidence that Indigenous Peoples and local communities and their holistic relationships with their territories of life can be one of the most fundamental solutions for facing the climate crisis, as radical transformations beyond just conservation and as radical alternatives for the current political economy and political governance systems. In Ashish’s point of view, another element of radical alternatives is the economic level and the necessity of a democratic economy.

Ameyali Ramos, International Policy Coordinator, ICCA Consortium, spoke about the international policy framework on biodiversity conservation and the role of commodification and financialization of nature, specifically in the process to negotiate the post-2020 global biodiversity framework .

Ameyali explained that the current draft framework had created severe concerns for Indigenous Peoples and local communities. According to her observations, the dominant discussion in this process is around the economic value of nature and of nature’s contribution to people. She brought this to the new emerging concepts, such as net-zero, Nature-Based Solutions, and nature-positive ecosystem services. Although they might seem attractive from a distance, their actual results on the ground lead to severe concerns.

She also talked about the language of the draft framework and the importance of considering the contribution of people to nature rather than merely taking nature as a consumable entity. She read a poem from one of the ICCA Consortium’s Honorary members to explain this issue: ‘If the most critical part of the body is the heart for a human person, what would it be for the planet earth?’

Ameyali elaborated on the views of Indigenous Peoples and local communities in the ICCA Consortium membership regarding nature and biodiversity conservation, with the point that the solution already exists to tackle the climate and biodiversity crises. She insisted that market-based solutions divide and exclude humans from nature and are not in line with Indigenous and community cosmovisions.

Gijs Spoor of the Regen Foundation started with an introduction to the ecosystem of their work in the enDAOment program (DAO refers to “decentralized autonomous organisation”), data entrepreneurship, blockchain, and the potential of this initiative for taking control of data and information from the government and transferring it to the people, including Indigenous Peoples and local communities.

As a significant initiative, he mentioned that it could allow communities to make income based on their wealth, knowledge, and production. At the same time, they can play in a game designed by themselves, based on their values in their territories, and not just follow already defined rules by the market. There are some challenges, cultural clashes, and a lack of mutual knowledge between technical professionals and communities and the nature of the market.

Presentations and discussions of the third panel.