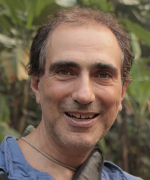 Collaborator for ICCA Alerts and SAFE

Based in Italy/ Philippines. Dr Dario Novellino is an anthropologist and defender of indigenous peoples’ rights. Most of his advocacy work has taken place in Southeast Asia, especially the Island of Palawan (The Philippines), but he has also lived with the Inuit people of Canada and other indigenous groups throughout Latin America and Asia, and contributed to the empowerment of local pastoralists in Central Italy. He is affiliated with the Centre for Biocultural Diversity University of Kent (UK) and has received numerous international grants and awards for his extraordinary engagement with indigenous peoples. In 2013, he initially conceptualized the idea of establishing a dedicated fund for land-rights-defenders, which is now coming into being with the Consortium support as the SAFE initiative. In 2015, Dario was elected Executive Director of the Philippines-based Coalition against Land Grabbing (a Member of the Consortium).