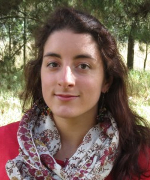 Based in France. Throughout her studies in geography at the University of Stockholm (Sweden) and the University of Lyon Lumière (France), Emma was fascinated by the many bridges that still need to be built between social and environmental sciences, while focusing on protected and conserved areas. Emma started working for the Consortium when she was finishing her master’s degree in 2013. Since then, she has had the chance to work for several months in the offices of the Consortium founding Member Cenesta, in Tehran, learning in particular alongside Taghi Farvar. She then worked for several years in Ecuador for the Consortium and more closely with the Members of the country. Following the Consortium on many continents, it is in order to get closer to European issues that she settled back in France. She is interested in issues of membership participation in particular through the use of different methods of popular education, as well as in gender and youth issues.