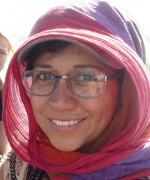 Based in Colombia. Isis is a Colombian biologist with a MSc. in Environment and Resource Management from the Free University in Amsterdam. Her work experience includes different local and international environmental NGOs in Latin America, Europe and Africa. Among other projects, she has been involved in the rehabilitation of confiscated capuchin monkeys in La Macarena, Colombia; and leopard-human conflicts in the Waterberg Reserve, South Africa. In 2005 she moved to the Netherlands to pursue her Master’s degree and later worked at the international secretariat of Friends of the Earth in Amsterdam. In 2009, Isis participated in the IUCN Netherlands’ Nature and Poverty program, developing the ‘Local Ownership of Conservation Agendas’ pages, which gather documents and case studies describing community- based conservation and sustainable use initiatives, which, in 2009, she combined with volunteer field-work in Chiapas, Mexico, and Santander (Colombia). In 2011 Isis joined the Global Forest Coalition and is now actively engaged in campaigns and advocacy work, mainly addressing gender aspects in forest management. She has played an active role during the SDG/post2015 negotiations with the Women’s Major Group on Sustainable Development (WMG).