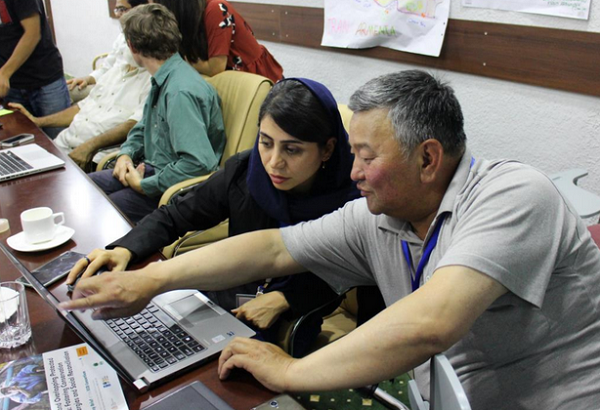 Throughout 2017 the Consortium has continued to provide support to ICCAs at local, national, regional and international levels by advancing the ICCA Global Support Initiative (GSI) and a few other companion projects. As part of that, it has been highlighting “emblematic ICCAs” at local level, providing catalytic support in 30 countries, facilitating regional capacity exchanges in more than three regions and continuing to follow closely relevant international policies. For the latter, in particular, it kept contributing to technical advances of the Convention on Biological Diversity, but more specifically also participated in international marine and coastal conservation events (Oceans Conference, IMPAC), focused on ICCAs and human rights and ventured into the business and biodiversity arena. Meanwhile, the Consortium has been implementing its ambitious new Strategic Plan— in particular by strengthening internal governance, improving communication and setting the basis for fundraising to come to fruition in 2018-2019. A novelty of 2017 is that for the first time the Consortium not only contributed to the policies of other major conventions or institutions, but started developing policies of its own. Finally, while we must notice a slowing down in the pace of production of new Consortium Policy Briefs, it was possible to compile, produce in three languages and diffuse a coherent process guidance to facilitate self-strengthening of ICCAs.

The Global Initiative in Support of ICCAs (GSI) was supported by GEF SGP dedicated grants in most of the pilot countries identified by UNDP. As part of that, many national catalytic organisations were identified and contracted by GEF SGP national offices. In all such cases, the Consortium has been eager to collaborate, but we have learned that the relationship with our crucial national partners can be in a spectrum from “intense and effective” to “non-existing”. This appears to depend strongly on the capacities, goodwill and interest of GEF SGP national coordinators and committees: a powerful lesson for the future of this crucially important initiative. Overall, the GSI stimulus has revealed a major positive form of support for ICCAs, which is particularly effective when the Consortium and its Members are managing to work closely with the national GEF SGP offices.

ICCA networks exist today in at least 18 countries (see the list in the report) and attention towards emblematic ICCAs is emerging in all of them and more. In 2017, our technical advice was delivered to partners in 30 countries and we have co-organised experience sharing and capacity development initiatives at regional level in West Asia, the Cono Sur, Eastern Europe, francophone Africa and Africa overall. Capacity building events at national level took place in Bolivia, Burkina Faso, Canada, Chile, Colombia, DRC, Ecuador, Finland, Georgia, Guinea, Kenya, Kyrgyzstan, Iran, Mexico, Senegal, Spain, Switzerland, Tanzania, Zambia, etc.

The Consortium has maintained and nourished partnerships with the IUCN Global Protected Areas Programme – with whom we have collaborated on governance of protected and conserved areas (national workshops for sharing experiences and joint planning and learning (e.g. in Tanzania, Georgia, Austria) and with UNEP WCMC, with whom we have advanced towards effective and sensible ways of including ICCAs in the WDPA with the support of national peer-support and review processes. Spain, Iran and the Philippines have been at the forefront of such national processes. We are ever more realising that the process of registering ICCAs in an international registry and the WDPA cannot be taken lightly or carried out at hoc (beyond the possible need of spotlighting some emblematic ICCAs). It rather requires careful planning and accompaniment, lest it may “burn” opportunities for effective recognition.

Following an effective collaboration with the UN Rapporteur on Environment and Human Rights, the Consortium is proud of seeing ICCAs taken into account in relevant UN Reports. Participation in the UN Forum on Business and Human Rights, however, made us aware of how long the road towards impact (e.g. enhanced security of ICCAs and protection against undesired development initiatives) may be. As a positive note, the occasion of participating in the Forum prompted us to clarify and start elaborating our own policies, such as a policy of “NO GO” for destructive developments in ICCAs and a policy on gender issues. Progress in the partnership with Friends of the Earth International (FoEI) about ICCA Alerts and the Solidarity Action and Fund for the Defenders of the Commons and ICCAs (SAFE) has been—overall—disappointingly slow.

The new Strategic Plan of the Consortium foresees enhanced attention to the organisational structure of the Association— towards a solid regionalisation process, while enhancing internal governance, communication and fundraising. For that, 2017 has marked an important step towards a more effective role for our new Council (the new name for the Consortium Steering Committee), which developed its working committees and had meetings on Skype and in person. The Membership Committee, in particular, consolidated a revised Membership Policy and started implementing it in earnest. As part of that, the Consortium shed some Members that did not seem to function properly any longer— while steadily acquiring others. It also agreed on new monetary and non-monetary ways to contribute the membership dues. At end of 2017, we had 116 Members (organisations) and 290 Honorary members (individuals). We also then held the first Round Table of Friends and Partners of the ICCA Consortium— an initiative that proved useful to plan ahead for 2018 and we are intending to replicate in future years.

Our communications outlook improved substantially in 2017 with the completion and functioning of the new Consortium website, which is even richer than it used to be, but is also better organised and usable (we love it! ). Only one issue of our Newsletter (a major enterprise) was produced, but our new Newsflash has also begun regular operations. We started working on a concise document to communicate about the Consortium (some of us call it a “communications deck”) and prepared for being able to offer webinars in three languages. Finally, while it is true that the new Consortium Policy Briefs have been advancing more slowly than expected, in 2017 we managed to compile, produce in three languages and diffuse a coherent guidance on processes to facilitate self-strengthening of ICCAs. Such processes support IPs and LCs towards enhanced awareness, documentation, planning of specific initiatives, communication, networking, registering and advocating for policy support.