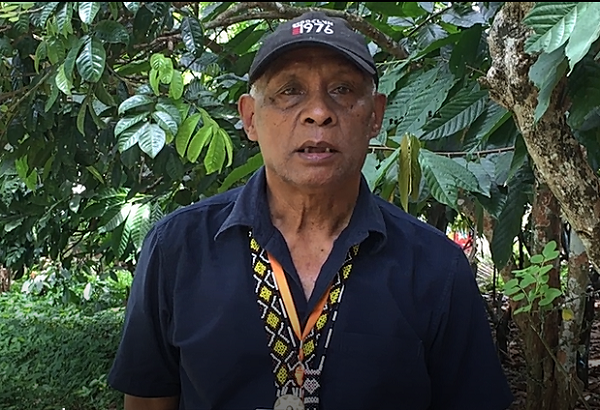 The Indigenous Obu Manuvu community of Davao City on Mindanao Island, Philippines owns over 13,000 hectares of ancestral forests at the foot of Mt Apo, the Philippines’ highest peak. By engaging the Obu Manuvu “Pusaka” cosmology, they manage these ancestral forests as an ICCA to benefit biodiversity, regional economy and, more importantly their well-being and culture.

The Obu Manuvu were nominated for an Equator Prize in recognition of their way of combining Indigenous knowledge and modern techniques through their Pusaka approach in ancestral forest governance. To date, over 100 Indigenous forest guards perform monthly patrols to protect the Obu Manuvu ICCA from deforestation and degradation, amidst the COVID-19. This video highlights the value of their historical experiences with epidemics and how their time-tested adaptations helped them cope. It is also a plea for cooperation, mindfulness, and discipline during this unprecedented times.

The Obu Manuvu Unified Tribal Council represented by its leaders Mahabok Luis Lambac Sr, and Lipatuan Joel Unad, thank the National Commission on Indigenous Peoples of Davao City, and the City Government of Davao for their support to Obu Manuvu governance of their ancestral domain. The Obu Manuvu assisting NGO and partner, Philippine Eagle Foundation, thanks BUKLURAN, the Philippine ICCA Consortium, and NTFP-EP for supporting their culture-based conservation work with Indigenous Peoples across the Philippines.

A video produced in collaboration by Obu Manuvu Tribe Davao City and the Philippine Eagle Foundation.