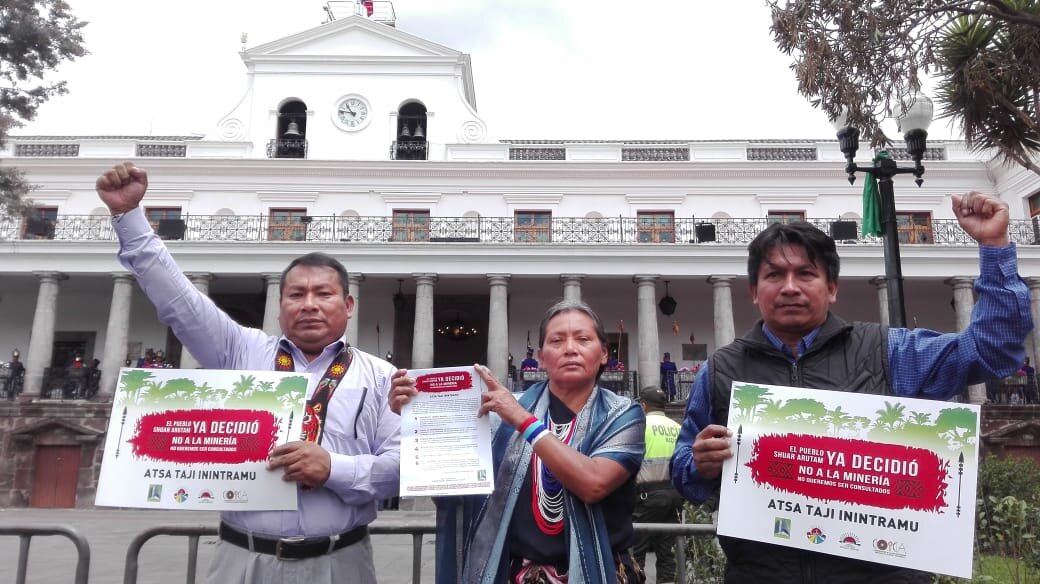 Josefina Tunkui, President of PSHA, protests in front of the Government Palace of Ecuador with two other Shuar authorities in 2019. Photo: Fundacion Aldea

The territory of life of the Shuar Arutam People (Pueblo Shuar Arutam, PSHA; ICCA Consortium Member) is in the Ecuadorian Amazon in the Cordillera del Cóndor. PSHA is an indigenous institution representing 47 Shuar communities in the Morona Santiago province, which cover 232,533 hectares of humid tropical forest on the border with Peru.

The Shuar consider this territory of life as a “mother” and are committed to caring for her, as she bestows them with the necessary goods for their life every day. The PSHA territory is home to ecosystems of high biological diversity and unique flora and fauna species.

The mountain range has important watersheds including the main rivers Santiago, Zamora, and Coangos. It contains countless waterfalls of great importance in the Shuar cosmovision. However, while the Shuar Arutam have resisted and defended the territory, its subsoil contains mineral riches that have been coveted for decades by transnational companies.

In 2020, on top of facing the impacts of the COVID-19 pandemic, PSHA had to confront divisive strategies and a disinformation campaign deployed by the Canadian mining company Solaris Resources Inc. In March, the company Solaris Inc. brought unofficial representatives of PSHA to Canada, to present the results of a process of “consultation” at the Prospectors and Developers Association of Canada 2020 (PDAC 2020), the world’s leading convention for exploration and mining of minerals. However, this so-called consultation did not respect the internal organizational structure of PSHA and did not comply with the international standards for “free, prior, and informed”, because PSHA, as the representative institution of the 47 communities in the Shuar territory, was not invited to participate. In addition, PSHA denounced that the return of the mentioned individuals from Canada to Shuar territory contributed to the spread of COVID-19 among its inhabitants.

In response, PSHA issued a public statement  on 3 April, declaring that the prior consultation process carried out by Solaris Inc. and the Ecuadorian government with only two communities was irregular and in violation of the collective rights of the 47 communities represented by PSHA.

This public statement also ratified the resolutions that PSHA had taken in its previous assemblies, and that led them to launch a campaign called “Pueblo Shuar has already decided: No to mining” in the year 2019. Following this, SSolaris Inc. further attempted to divide PSHA by forming a so-called Strategic Alliance with the two communities, which has been widely promoted on the company’s social media networks.

On 8 September, Solaris issued a press release announcing the signature of the “Agreement of Cooperation, Benefits and Access for the Warintza Project” with this “Strategic Alliance”, made up by representatives of the Shuar centres of Warints and Yawi, according to the company.

On 23 September, PSHA issued an “Open Letter” addressed to the headquarters of the company in Canada and to the Ecuadorian authorities, stating that the “Strategic Alliance” is an illegitimate fabrication by the mining company; its purpose is to manipulate the Shuar, offering gifts and benefits, and thereby disregarding the legitimate and traditional structures of the indigenous organizations. In addition, PSHA has recently denounced intimidations by the Ecuadorian Armed Forces and Police, operating at the request of the company Solaris and in coordination with the Government of the Province of Morona Santiago, in view of the international legal actions PSHA has decided to take.

Currently, concessions for large-scale mining projects have been granted on more than 56% of the PSHA territory, divided between at least three so-called “strategic projects”: Panantza San Carlos, Lost Cities and Warintza.

To the detriment of PSHA, several internationally recognized collective rights have been violated by extractive companies, with the complicity of the Ecuadorian State: the right to consultation and free, prior and informed consent, the right of indigenous peoples to define their institutions, and the right to territory and self-determination.

In response to these infringements, PSHA will file a complaint with the International Labour Organization (ILO) for the failure of the Ecuadorian State to comply with the rights stipulated in Convention 169 on Indigenous and Tribal Peoples, ratified by Ecuador in 1998.

The ICCA Consortium condemns all violations of human rights and the environment and expresses its full support for the Shuar Arutam People in their search for the recovery of their rights and the defense and protection of their territory of life. Therefore, we call on:

For more information about the case and the position of the Shuar Arutam People, we invite you to watch the documentary “The Shuar People have already decided: No to mining” on the platform Bombozila and the Facebook live streaming of the event “Pueblo Shuar Arutam against mining – Filing a complaint at the ILO” below:

Featured image: PSHA’s authorities protest in front of the Palace of the Government of Ecuador in 2019. Photo © Fundacion Aldea