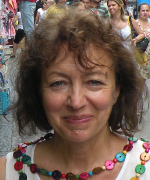 Member of the Council of Elders
Based in Switzerland and Italy. Grazia has been working on governance for the conservation of nature and community rights and responsibilities for about thirty years, often in close collaboration with the International Union for the Conservation of Nature (IUCN), for which she developed and run the Social Policy Programme in the early 1990s. She has been Vice Chair of the IUCN CEESP and WCPA Commissions for twelve and eight years, respectively, and a member of advisory and governing bodies for protected and conserved areas in several countries. In 2008, she was a main co-founder of the ICCA Consortium, for which she served as Secretary of Council/ Global Coordinator and Key Strategy Advisor until 2019. Grazia’s years of research in solar physics (University of Florence and Stanford University, 1977-1983) and teaching in public health (University of California at Berkeley, National Institute of Health of Italy, 1985-1992) helped her to develop a keen interest in interdisciplinary initiatives.  She has worked in over sixty countries, authored more than thirty volumes of “collective thinking” and organised many international gatherings that fostered progressive steps in the policy and practice of conservation of nature— including the Streams on Governance at the World Parks Congress in Durban (2003) and at the World Parks Congress in Sydney (2014).  Currently, she is President of the Paul K. Feyerabend Foundation.  In 2014, she received the Fred Packard International Parks Merit Award.