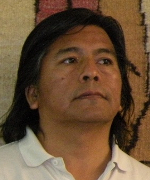 Based in Argentina. Jorge Nawel is Werken (speaker) for the Confederación Mapuche de Neuquen – an ICCA Consortium Member of which he was a co-founder. He sits on the Advisory Body for on Indigenous Peoples’ Policy of Argentina’s National Parks and is Treasurer of Human Rights Watch for Indigenous Peoples in Neuquen. Jorge has long experience with the territorial rights of IPs, protected areas, and conservation in the Cono Sur region. From 2000-2002, he was a member of the Co-management Committee of Lanin National Park, and, in 1996, he served as Coordinator of the International Indigenous Forum on Biodiversity. In 2007, he actively participated in the Latin America Parks Congress, in Bariloche, and, in 2008, he coordinated the Indigenous Forum on Protected Areas at the IV World Conservation Congress, in Barcelona. From 2012–2016, Jorge was responsible for the Intercultural Co-Management Council, of Nahuel Huapi National Park (Río Negro). Since September 2016, he has represented Nahuel Huapi Park in the Coordination Bureau of Nahuel Huapi Park and Lanin National Park, with the National Parks Administration Board of Argentina. Jorge has worked on development issues for the Mapuche communities and on other aspects of natural resource policy, including the cultural impact of mining, oil extraction, and forest industries. He strongly supports the self-governance of indigenous territories as a model for “conserved areas” worthy of recognition on the same level as state- governed protected areas.