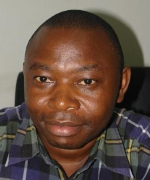 Based in Goma, Democratic Republic of Congo. Joseph is an indigenous Walikale from the North Kivu province in the Democratic Republic of Congo. He graduated in Rural Development and is currently the coordinator of a Member group of the ICCA Consortium: the Network of Indigenous Peoples and Local Communities for the Sustainable Management of Forest Ecosystems (REPALEF), in the Democratic Republic of Congo. Since March 2012, he has also been a member of the technical committee of a similar network that covers the whole of Central Africa (REPALEAC). In addition to creating his own organization, Shirika La BAMBUTI, whose work he coordinates in the provinces of North Kivu, South Kivu and Maniema, Joseph has been director or coordinator of several local and provincial organisations defending human and indigenous peoples’ rights. As such, he has represented indigenous peoples in international meetings of the UN, the Convention on Biological Diversity, and the World Bank.