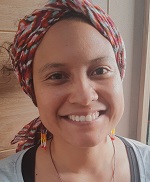 Kathia discovered her passion for communication and learned her skills ‘from the grassroots’, with popular education, communication and art collectives in Lima and beyond. Since then, she worked as Communications and Press Officer for the National Indigenous Women’s Organization ONAMIAP and designed media campaigns against oil contamination with the platform of Amazonian Indigenous Peoples United in Defence of their Territory (PUINAMUDT). With the Autonomous Territorial Government of the Wampis Nation (GTANW), she produced a documentary on the Wampis’ struggle against illegal mining and currently contributes to the Wampis communications program. As a communications allrounder, she likes to explore different forms of artistic and audio-visual expression from a gender-sensitive and decolonial angle. She’s keen on music, plays the ukelele and used to play in an all-women drum ensemble.