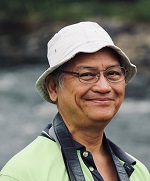 Based in Malaysia. Peter Kallang is Kenyah, one of Borneo’s Indigenous ethnic groups, from Sarawak, Malaysia. Since his student days, Peter has been involved in a range of voluntary humanitarian and social activities. Opting for early retirement from his career at the age of 49 in 1999, he has been working as a full-time volunteer since then. Among other things, from 1979 to 1984, he served as Chairman of the Orang Ulu National Association (OUNA), a social and charitable organisation for the Orang Ulu peoples. In 2006, he founded the Persatuan Kenyah Miri (PKM), a cultural and educational association to preserve the cultural heritage of the Kenyah communities. A regular host for the ethnic Kenyah Miri FM radio broadcast “Talideo Kenyah” on Radio & Television Malaysia (RTM), he is knowledgeable in the community’s folklore and traditions. As part of the Malaysian five-year development plan, with the goal of becoming an industrialised nation by 2020, the state government of Sarawak planned to construct twelve hydroelectric dams. In 2011, eight non-governmental organisations and society-based organisations formed a coalition called “SAVE Rivers Network” (ICCA Consortium Member) to coordinate the resistance against the construction of the proposed hydroelectric dams. Under the leadership of Peter as the founding chairman, SAVE Rivers Network played a key role in stopping the Baram dam, which was supposed to be the second of the twelve dams planned for construction.