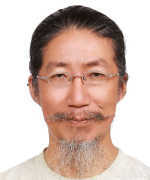 Sutej Hugu, based in Pongso no Tao. In 2000, Hugu co-founded and was elected as first Chairperson of the Cultural Taiwan Consortium, a national NGO that set out to work towards an integrated national identity by seeking connectedness to the land and nature.  Since 2010, he has served as CEO for the Tao Foundation, championing a campaign to remove a nuclear waste repository that was “temporarily” established in Lanyu Island thirty years ago. Tao Foundation has become the first ICCA Consortium Member in East Asia in 2012. In 2013, Hugu has helped to establish the China ICCA Working Group with Honorary members from different parts of the huge country. In 2014, with some veterans of the indigenous peoples movement, he assisted in launching the Taiwan Indigenous Conserved Territories Union (TICTU), at the presence of the ICCA Consortium President, Dr. Taghi Farvar. TICTU is today federating 748 tribal communities, whose indigenous territories almost entirely overlap with state protected areas and national forests.  Hugu also has proposed to accept trans-boundary and overlapping situations in the Consortium regionalization process. As an example, the South-East Asia & West Austronesia Region and the Oceania & East Austronesia Region can go beyond colonial geopolitical divisions. His vision towards restoring ICCAs is about tribal communities deeply embedded in their ecological habitats; indigenous rights fully implemented by traditional institutions; local knowledge and land ethics adaptively applied; and collaborative livelihoods achieving common wellness for all living beings.