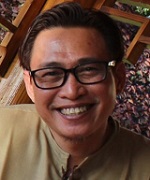 Based in the Philippines. Teddy, as he is popularly known, belongs to the Tuwali tribe of Ifugao and the Gaddang Tribe of Nueva Vizcaya provinces in Northern Philippines. He has been Mayor of Kiangan (1995-2000) and Governor of Ifugao (2001-2004; 2007-2010). Since 2010, he has been Congressman for the lone district of Ifugao, championing the cause of all indigenous peoples in the Philippines.  From 2010 to 2013, he was chairman of  the Philippine Congress’s Committee on National Cultural Communities and, from 2013 to 2016, Vice Chairperson of the Committee on Indigenous Peoples.  Within the House of Representative of the Philippines, Teddy has consistently voted for liberal ideals, e.g. against the re-imposition of the death penalty, to curb police brutalities and to stop the  discrimination of marginalized sectors, including indigenous peoples.  As a key supporter of human rights, he has promoted free public college and university education, legalized divorce, free Wifi access in all public places, mental health education, maternity leave rights, LGBT rights, indigenous education in all indigenous communities and many other bills focusing on indigenous issues. Among those are a bill designed to specifically protect ICCAs (ICCA Law—currently under reading in the Senate), legislation to preserve the Ifugao Rice Terraces, and a bill for national land use that includes ancestral lands as one of the three main “land domains” in the country. As a Honorary member of the ICCA Consortium for several years, Teddy has been following the work of the ICCA Consortium in the Philippines and spoken at various international conferences on the centrality of ICCAs–territories of life for conserving nature and culture and upholding human rights.