A variety of international processes affect Indigenous peoples, local communities, and their territories and areas. These involve negotiations between governments and result in international law, which is comprised of legal instruments such as treaties, declarations, resolutions, recommendations, policies, programmes of work, and plans of action. Their implementation is supported by intergovernmental organisations such as UN Environment and the UN Development Programme.

International processes can initially seem painfully slow and far removed from the daily realities of community life. However, they can have a large influence on individual countries’ laws and policies, which in turn directly impact communities at the local level. It is thus critical for community members to participate strategically to ensure that the concerns and priorities outlined in their protocols are effectively represented. Engaging in international processes should be seen as a long-term investment that can yield potentially significant gains, particularly when these gains are actively used at the national and sub-national levels. 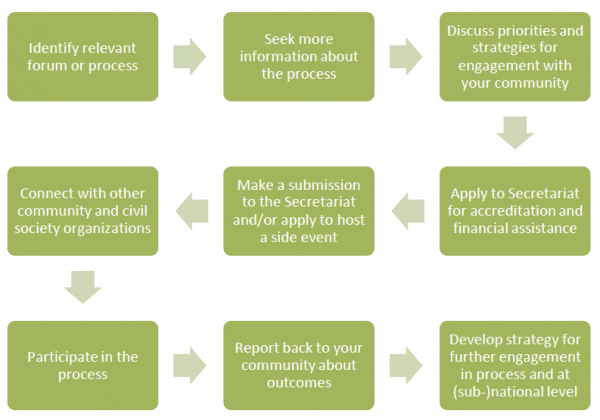 A number of steps are involved in participating in international processes, some of which are outlined in the Figure above. Since many community and civil society organisations that have gone through these steps before, you could connect with them to seek guidance and information about their experiences. After gaining accreditation and funding, one of the most important steps is to participate in the process itself. The other most important step is to report back to your community and further develop a strategy for engagement in relevant international and national processes. The ultimate value of an international process is how its outcomes are used at the local level to positively impact communities and the environment.

Guidance for engaging in intergovernmental meetings

(Disclaimer: the text and image above is adapted from “Biocultural Community Protocols: A Toolkit for Community Facilitators” (2012), edited by Holly Shrumm and Harry Jonas. Natural Justice: Cape Town.)