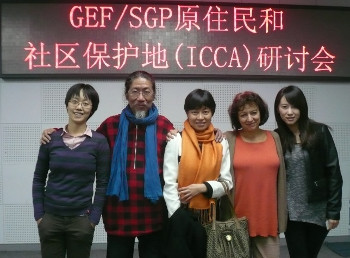 A one-day workshop fully dedicated to ICCAs took place in Beijing on December 14, 2013 as closing feature of a three-day capacity building event for GEF SGP grantees in China.

The workshop sessions were designed to be participatory and interactive, with the participants spending the afternoon in six working groups roughly divided by region and key ecosystem interest (and thus type of “potential ICCAs”). In the morning, however, the participants had an opportunity to hear and discuss about the concept of ICCA, specific case studies and lessons learned from other countries and various contexts. Recalling the three characteristics that define ICCAs, it seemed to us that – in the light of the cases discussed in the workshop — in China you can still find the first characteristic, i.e. the strong bond between the communities and their territories, but the communities are not reported to be “capable of making decisions” about how to manage the natural resources. So the second characteristic is missing. In turn, the unclear tenure over resources has created many situations of “open access”, with the consequence that even the third characteristic (actual conservation of nature) is often also missing. We emphasized that two dimensions of restoration may need to be undertaken: restoration of the environment and restoration of the community institutions that can collectively care for their environment. For ICCAs to flourish in China, the strong relationships between communities and their environments must be highlighted and revived. And for natural resources to be effectively conserved, the community capacity to take management decision must be strengthened. 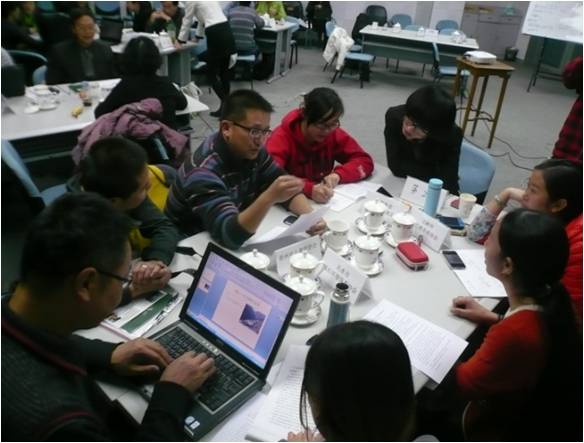 The workshop participants also heard about ways to register ICCAs in the dedicated Registry held at UNEP WCMC in Cambridge (UK). It was discussed that ICCA is an effective governance type that can contribute greatly to the conservation of biological and cultural diversity and increase the coverage of effectively protected territories and should thus be properly registered and valued. Registration in the ICCA Registry, however, should not be considered as an end per se, but as a one element of an overall situation. It is that overall situation that needs to be understood by the organizations and peoples who wish to make a difference for ICCAs in the country. For instance, the need for FPIC processes and in-depth analysis of the ICCAs by their own caretakers communities were especially emphasised.

ICCA custodians should be strongly encouraged to develop their own analysis, their own plans and their own expertise, rooted in their unique Chinese experience. As a matter of fact, GEF SGP and the Consortium are developing country-specific strategies and the focus is, beyond listing ICCAs in the UNEP WCMC Registry, on developing meaningful analyses of what are the key opportunities and problems for ICCAs – individually and in the country as a whole – and how can those be met effectively.

After the workshop, a small but critical ‘Strategic Meeting for ICCAs in China’ was arranged among a few enthusiastic veterans in the field of conservation and community work, who decided to establish a ‘Working Group on ICCAs China.’ Not even two hours after birth, the group was already endowed with a ‘web chat group’, taking advantage of the latest social media. The Working Group decided by consensus to start by identifying and analyzing the national legislation that could support ICCAs in China, digging out exemplary cases of diverse ICCAs, and organizing a team to prepare for a Chinese participation in the Governance Stream of the World Parks Congress (Sydney, 2014). The idea of a Chinese translation of the IUCN Guidelines no. 20 on Governance of Protected Areas was also proposed and Li Bo and Liu Yi agreed to seek support for it. And Hou Yuxin offered to share with the group materials related to his current research on “happiness and well being”.

In term of exemplary ICCA cases in China, a few names were made, but it was discussed that people should not draw too much attention on ICCAs, as mass tourism could follow and mass tourism is one of the worst killers of ICCAs (and anything else!). On the other hand, the Chinese public should know that ICCAs exist and are precious.

Liu Yi, National Coordinator of UNDP GEF SGP China; Dr. Zhang Yingyi, Director of FFI China; Dr. Xie Yan, Director of WCS China; and the volunteer convenor of the working group Dr. Li Shengzhi, Director of Fieldworks, Shansui Conservation Centre were all invited to become Honorary members of the ICCA Consortium, joining the current Honorary members Li Bo and Hou Yuxin. For 2014, GEF SGP China will support 19 new NGO/CBO projects. Among them, 14 are biodiversity projects, and 5 are climate change projects. There are 6 potential ICCAs that could be registered under the ICCA Registry via such SGP projects. At the very least, the registration process will provide the grantees (NGOs and local communities) with a learning process, and general ICCA awareness will increase. The Consortium also hopes to be able to organize a ‘Conference on Community Governance and Management of Commons in China’ in 2014 or 2015.