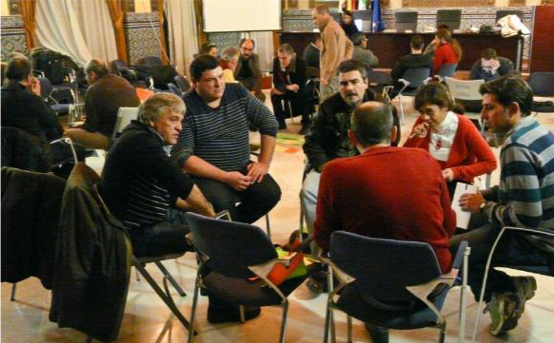 By: Sergio Couto González, ICCA Consortium Coordinator for South and West Europe and
member of the Steering Committee of Iniciativa Comunales.

Little more than one year has passed since the ICCA Consortium General Assembly (GA) in Valdeavellano de Tera (Soria, Spain) in October 2013. There and then, something important, and yet low-key, took place in one of the small rooms surrounding the large hall of the GA. A group of representatives of different ICCAs/Common lands and seas from Spain met for the first time. Why were they there? Why side by side with the Consortium’s GA?

It all started one year before, when some of us associated with the ICCA Consortium were gathering information for the report Recognition and Support of ICCAs in Spain (2012). For that report, we contacted about 200 relevant people and local and regional initiatives in Spain. While doing this, we had two major surprises:

Thanks to the report (which was in no way exhaustive) the tip of the iceberg was described and assessed. Reality showed that there were many people and communities working on supporting and successfully managing ICCAs, while many other common lands were alienated, neglected or just privatised, and that this situation was almost “invisible” for society. As we interviewed different people and communities, we facilitated contacts among one another. We also communicated to the communities that, for the first time this kind of initiatives were starting to be recognised at international level in different arenas (e.g. conservation, human and collective rights, direct democracy, etc.). This led to the idea that gathering the ICCA Consortium members with the representatives of the federations, associations and other groups governing and managing different types of commons in Spain would generate an amazing synergy. In such a meeting everyone was likely to see, understand and feel much stronger the importance of the collective heritage of Spain as part of an even larger global movement.

So, let us go back to when we all first met during the ICCA Consortium General Assembly in Valdeavellano de Tera, in 2013. In one of the late evenings of those days, the Spanish delegates gathered and started formulating their ideas. We decided to call ourselves “Iniciativa Comunales” (The Commons Initiative) and we sketched the “Declaration of Valdeavellano de Tera”. The Declaration, later refined and translated in ten languages (English, French, Spanish and other 7 co-official languages in Spain), is now signed by 28 organizations –from common forests, to transhumant and pastoral organizations, federations of hunting societies, shell gatherers and fishermen guilds, conservationist NGOs, etc. The “Declaration of Valdeavellano de Tera” was publicly released in Madrid last September will great success.

Having clarified what united us and our “common vision of the commons”, we decided to go for the next step and develop ourselves into an association.   Currently we include people who represent NGOs (as SEO/BirdLife or the ICCA Consortium itself), some academics and many organizations representing ICCAs and federations of lands and seas managed as “commons”. In our Statutes we included a “weighted vote”, so the votes of local community associations weight much more than those of people from universities or NGOs. With that, we wanted to make sure that communities will always represent the commons and ICCA movement. Additionally we decided not to admit unions or parties as member, to avoid the risk that the organization may be exploited to serve party interests or similar vested interests.

In January 2015 the members of “Iniciativa Comunales” finally met in Córdoba (Andalusia) for a double purpose. The first was the one of approving our Statutes in our first General Assembly, and the second the one of co-organising a workshop with the EU project COMET-LA to collectively develop the research agenda on the commons in Spain based on the needs of the communities managing ICCAs and the commons in Spain. The idea was that, for the first time, the communities present at the event will themselves design the research agenda, in order to set the research priorities on the commons on a realistic and applied basis. The final document is about to be published and will be available from the ICCA Consortium webpage.

Ahead of us are now many initiatives to find shape and many challenges to overcome… but there is no better company than community members to face all that!