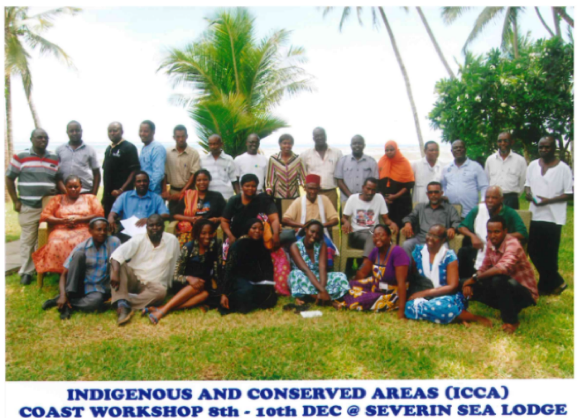 In December 2014, representatives of various ICCAs located in the coastal region of Kenya, gathered over a 2-day period in the ancient town of Mombasa, to discuss ways in which ICCAs can take advantage of the on-going devolution process, so as to gain appropriate recognition and support. It was also an opportunity for the participants to connect with others, and to share their victories and challenges. The workshop was organized by the GEF Small Grants Programme of UNDP, in collaboration with Ujamaa Center, a local NGO based in Mombasa, which promotes community rights over land and natural resources. At the end of the workshop, the participants had resolved to work together under a platform they called “The ICCA Coast regional chapter” and they selected among themselves 7 persons as ICCA Coast champions. The champions represent the different categories of ICCAs, and they will drive the ICCA agenda at the Coast, under the guidance and support of Ujamaa Center.

Prior to the December 2014 workshop, two other workshops were organized and hosted by “the ICCA team” – a small group of professionals based in Nairobi.  The first was a 1-day workshop in June 2013, which targeted state and non-state actors in the environmental arena, whose work and mandate requires them to work with ICCAs. The purpose of the workshop was twofold: (i) acquiring a better understanding of the definition and characteristics of ICCAs and (ii) creating partnerships which would foster a collaborative effort to support ICCAs. Dr. Grazia Borrini Feyerabend, Global Coordinator of the ICCA Consortium, keynote speaker, gave a comprehensive and global overview of ICCAs, which elicited a lively discussion.

As a follow-up to this primary workshop, local communities and representatives of ICCAs from different parts of the country were invited to a 2-day workshop to exchange views and share ideas. While representatives of community conservancies, sacred forests, marine co-management areas, and rangelands talked about their respective areas, a common thread was emerging: threats and challenges faced by ICCAs across different ecosystems were similar. It includes lack of security of tenure, poor understanding of relevant policies and legislation, degradation of the natural resource base and lack of support from state actors. However, it also revealed the opportunities that ICCAs could collectively tap into, in order to address their challenges. Indeed it appeared evident that, rather than struggling independently, it would be more effective for ICCAs to address their challenges within a harmonized and collaborative effort among their different types.

Given that there are perhaps hundreds of ICCAs located across the Kenyan land/sea-scape, the workshop participants agreed to carve the country into regions and develop a phased approach, in order to be effective and enhance opportunities by starting each phase equipped with lessons learnt from the previous phase. The first region selected was the Coastal one, and a workshop for the Coastal ICCAs was held in December 2014. The Kenyan Coastal ICCAs chapter was established on this occasion (see picture above).