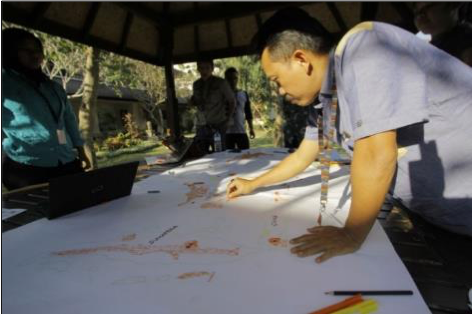 Together with UNDP GEF Small Grants Programme Indonesia and the Working Group on ICCAs in Indonesia (WGII), the ICCA Consortium, organized a regional knowledge sharing and capacity-building event on ICCAs in Lombok, Indonesia, last August 17-22.  On the occasion, representatives of indigenous peoples and local communities who govern and manage their ICCAs, relevant government agencies, supporting civil society organizations and national GEF SGP coordinators converged from the Philippines, Malaysia, Vietnam, Taiwan, province of China, Timor Leste, and the host country. They presented the situation of ICCAs in their countries and worked through their action plans to initiate or enhance the ICCA movement. “Each country in the region has a different approach and is at a different level. Some are at a very elementary stage, while some are very advanced” said Taghi Farvar, President of the ICCA Consortium. Through a series of discussions and workshops, the participants shared their experiences, key issues, opportunities, and problems in the recognition of ICCAs in their countries. “A meeting like this is very helpful for various rightsholders and stakeholders in each country to learn from each other. We worked together for five days and everyone learned a great deal.” added Taghi.

The Vietnam team, a relative newcomer in discussions on ICCAs, was enthusiastic about starting their own national learning network and agreed that they have now a good beginning in their understanding of ICCAs and are willing to share this in their country. “I was very proud to have the opportunity to participate” said Joao do Rosario Pereira from Timor-Leste, another country that has just started its reflection on ICCAs. Even though it was the first time he had heard the term, when he became familiar with the concept he confirmed that ICCAs have existed in his country since time immemorial.

The People’s Coalition for Fisheries Justice (KIARA), a member of the WGII, hosted the field visit to their community in Teluk Jor.  KIARA supports fishing communities who practice awig-awig, a traditional fishing system with rules that carefully take into account fishing zones and seasons. This coastal resource management system is ruled through community agreements that include dispute resolution mechanisms and sanctions. East Lombok District has recognized the local wisdom of such community based resource management schemes through District Regulations No. 9/2006 and No. 10/2006, which indeed legally recognize awig-awig.

The Working Group on ICCAs in Indonesia was formed after an ICCA Symposium in Bogor, Indonesia in October 2011 (read more here). Its aim is to create awareness and promote ICCAs and their role in conservation and equitable natural resource management. WGII is composed of NGOs active in advocacy and best practices for good governance of natural resources, environmental protection, community mapping, community rights and the recognition of indigenous peoples. These include KIARA (People’s Coalition for Fisheries Justice), JKPP (Participatory Mapping Network in Indonesia), BRWA (Ancestral Domain Registration Agency), NTFP-EP (Non-Timber Forest Products – Exchange Programme), HuMa (Association for Community and Ecology-based Law Reform), Pusaka (an Indigenous Peoples advocacy organization), AMAN (Alliance of Indigenous Peoples of Indonesia), Sawit Watch (Oil Palm Watch Indonesia), WALHI (Indonesian Environmental Forum/Friends of the Earth Indonesia), and WWF-Indonesia.  Through WGII efforts, the documentation of ICCAs is gaining strength all over the archipelago. Kasmita Widodo, coordinator of WGII, said: “The documentation of ICCAs is the first step towards the full registration of the customary lands in Indonesia and recognition and integration in provincial and district spatial plans”. BRWA has so far registered and verified 4.8 million hectares of customary lands in Indonesia.

The event fostered not only learning but also camaraderie among participants and paved the way for a regional learning network on ICCAs. About 60 participants left Lombok inspired by the sharing of ideas and full of plans to bring back to their communities and countries. “We will continue to strengthen our ICCAs and share the knowledge of ICCAs with other communities,” said Olon Somoi and Patricia Saibu, indigenous women from Sabah, Malaysia.

The event was supported through the ICCA Global Support Initiative (GSI), which is a collaborative initiative by UNDP GEF SGP, the German Ministry of Environment (BMU), the ICCA Consortium, IUCN and UNEP WCMC. 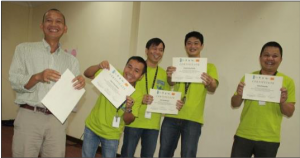 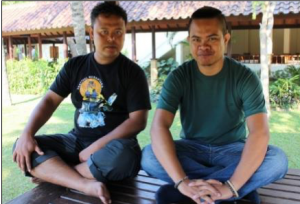 The new Regional Coordinator for South East Asia, Tanya Conlu, is currently drafting a project proposal for a Regional Network on ICCAs in South East Asia, to be refined and finalized by several regional actors and submitted to donors as soon as feasible.  This should hopefully provide the small but crucial funding to keep the regional “learning and action network” alive.  Let me use this postscript to recognize her fundamental role in taking the event to its very successful completion together with GEF SGP Catharina Dwihastarini, Hery Budiarto and Kasmita Widodo.

Let me also mention that the Honorary Members and Members in the region played their roles superbly.  In particular I should single out Cristina Eghenter and Crissy Guerrero (the latter without even participating in the event itself), but also Dave de Vera and Giovanni Reyes … all just amazing!    Sutej Hugu found support for a delegation of Taiwan, Province of China indigenous leaders to join the event, and this was rewarded by the admiration they managed to instill in everyone.  Their determination and passion to restore sovereignty over their indigenous territories are just contagious. There is much more that I should note, including the evident potential to expand and deepen ICCA work in Indonesia and Vietnam and to include East Timor in the regional learning network.  Of deep concern was news we heard from Malaysia, where dam building and timber entrepreneurs are forcing their way into indigenous territories. We are convinced that the declaration and recognition of such territories as ICCAs can provide them with a useful extra layer of protection… and we hope Malaysia will soon move to effectively embrace this route.