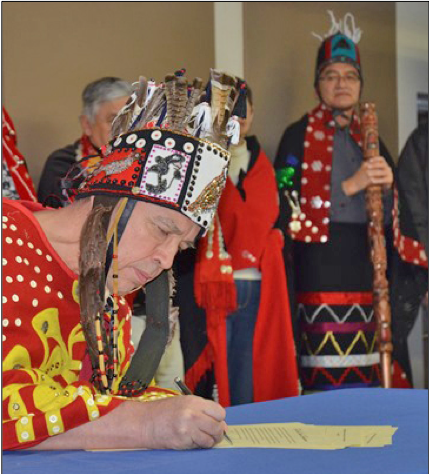 By: François Depey, Office of the Wet’suwet’en

Petronas (a major Malaysian oil and gas company) intends to build a gas (LNG) terminal near Lelu Island, on a site very critical to the life cycle of several salmon species in the estuary of the Skeena River (located in what is now known as British Columbia, Canada). Several Indigenous groups depend on those salmon runs.

During their January meeting, Wet’suwet’en Hereditary chiefs unanimously approved a motion to support the protection of salmon by opposing the Lelu Island project.

On January 22-23, 2016, several representatives of Salmon Nations (indigenous groups of that watershed) have joined forces and signed the Lelu Island declaration, which reads:

“The undersigned First Nation leaders and citizens of the Nine Allied Tribes of Lax Kw’alaams hereby declare that Lelu Island and Flora and Agnew Banks are hereby protected for all time as a refuge for wild salmon and marine resources, and are to be held in trust for all future generations.

Our ancestral knowledge, supported by modern science, confirms this area is critical to the future abundance of the wild salmon our communities rely on. It is our right and our responsibility as First Nations to protect and defend this place. It is our right to use this area without interference to harvest salmon and marine resources for our sustenance, and commercially in support of our livelihoods.

We hereby extend an invitation to all First Nations, the governments of Canada and British Columbia, and all communities that depend on the health of Lelu Island, Flora and Agnew Banks and the Skeena River estuary, to join us in defending this unique and precious place, and to protect it for all time.”

Six Wet’suwet’en hereditary chiefs also signed the declaration along with a large delegation of Wet’suwet’en members.

In these articles, you can learn more about the controversy and the event:

At Northern Salmon Summit, a Declaration: Cancel LNG or Else

To see more about the event, please watch the video of this link.