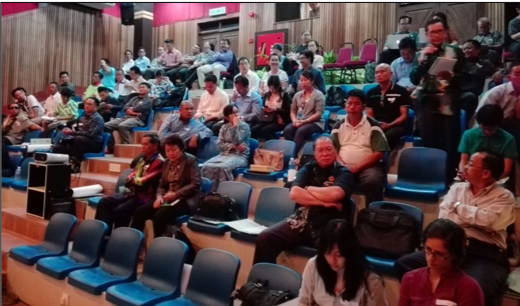 On 17 February 2016, a workshop was held in Kota Kinabalu (Sabah, Malaysia) to promote indigenous knowledge and practices in the sustainable use and management of forests and watersheds. This event was co-organised by members of the Sabah Social Forestry Working Group (SASOF), which includes the Sabah Forestry Department, ICCA Consortium members Non-Timber Forest Products Exchange Programme (NTFP EP) Malaysia and PACOS Trust, and the Indigenous Peoples Network of Malaysia (JOAS), among others. SASOF was informally established following the ASEAN Social Forestry Network (ASFN) Conference held in Kota Kinabalu in May 2014. At the February 2016 workshop, all current members of SASOF signed Terms of Reference to formally set out the group’s guiding principles and mandate, which aims to develop and promote forms of appropriate recognition and support for: social/community forestry; customary and local stewardship, governance and management of forests and other natural resources; and sustainable community enterprises and livelihoods.

The workshop centred on tagal hutan, a traditional governance and management system that involves the collective ownership and responsibility for the sustainable use of resources. Tagal means prohibition in the Kadazandusun language, while hutan means forest in Bahasa Malaysia. Tagal is practiced by the Kadazandusun indigenous peoples of Sabah to manage their inland fish and rivers, and it is recognised by the Sabah Fisheries Department under the Sabah Inland Fisheries and Aquaculture Enactment 2003. However, the tagal system can also be used to manage other natural resources such as forests, watersheds and wildlife, and has the potential to be used for developing a policy or legal framework to recognize communities’ conservation initiatives and ICCAs.

The workshop delved into the prospects of tagal hutan as a means to address issues of inclusion among indigenous communities in conserving and sustainably managing their resources, as they have done for generations. The keynote presentation by Jannie Lasimbang (JOAS) welcomed existing supportive provisions in the law, but acknowledged that they are often not implemented in practice; she also called for a holistic policy framework that supports the fullness of tagal hutan and the diversity of local traditions. The keynote address was based on research conducted by Jannie, entitled, “How can the traditional practices of tagal hutan promote the conservation of culture, forest and land through the development of a legal framework”, in collaboration with the Sabah Forestry Department, JOAS and PACOS Trust, with support from NTFP EP Malaysia. The workshop highlighted existing community initiatives such as community forests in Kiau and Bundu Tuhan, and hunting protocols and traditional territories in other villages in Sabah. This helped raise awareness, especially for the government agencies in attendance, of the concept of space, geography and land use of indigenous peoples within their traditional territories and through their traditional practices. The workshop also touched socio-economic aspects of tagal hutan such as tourism, subsistence use and non-timber forest products, and the role of tagal hutan in disaster risk reduction. Several government agencies, including the Sabah Forestry Department, Department of Fisheries, Sabah Parks and Department of Irrigation and Drainage, shared the respective lessons they had learned in implementing the laws and policies that provide, at least to some extent, for communities to manage their resources. The workshop allowed for an interactive dialogue between the roughly 100 participants from indigenous communities, NGOs, academia and government agencies, with a view to finding common ground for moving forward with social forestry and recognition of tagal hutan in Sabah. The members of SASOF and others will leverage this momentum to contribute to the development of a National Social Forestry Policy, which is expected to include tagal hutan.