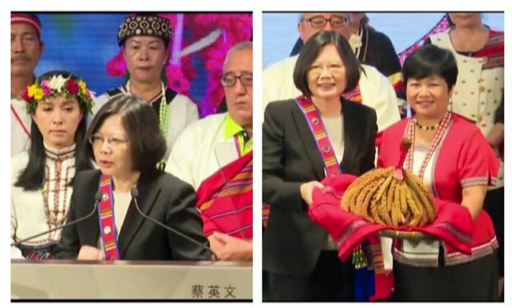 On 16th January 2016, Taiwanese citizens elected a new President from the Democratic Progressive Party by a 56.1% vote against the reactionary Kuomintang candidate. Tsai Ing-wen is the first woman to hold this office in Taiwan (province of China).  She promised to apologize to the island’s indigenous peoples for the persecution and plunder by the government that followed the Japanese occupation at the end of the Second World War. Beyond this, she is seriously considering forming a Truth Committee on Transitional Justice for Indigenous Peoples, which would operate directly under her supervision.

We, the Consortium member TICTU, propose to negotiate urgently a constitutional amendment that would guarantee recognition of tribal sovereignty through self-determination, and fully implement the rights of indigenous peoples. Following the recently approved status of 743 existing indigenous tribal communities in their ancestral territories as legal persons in public law, we promote the inclusion of community-governed commons as the best ground for restoring and strengthening Taiwanese ICCAs governance institutions. This is the first time in decades that we have had the opportunity to advise the government on such a powerful level. We believe it will inaugurate a long term struggle that will help maintain our means of survival, revival, and sustainability, for our children and future generations.

However, the root problem remains: what is the legitimacy of any State to appropriate the commons from the autonomous communities and indigenous peoples? We have seen clearly that there is no government, whether socialist or capitalist, that is effective in conservation or sustainability. The global market economy is totally blind to these issues and cruel in its treatment of indigenous peoples and of the environment.  The focus on monetary gain threatens the diversity and complexity of our planet. We urgently need a paradigm shift in the governance of our lands and seas. This dramatic re-evolution demands strategic alliances among tribal sovereignties across the world.

This alliance can start by sharing experiences and knowledge. From 22nd to 26th July 2015, a Workshop on Tribal Geographic Information System (GIS) was organized with support of the National Taitung University. Dr. Alan Watson from the Leopold Wilderness Institute and Dr. Steve Carson from the University of Leeds, were invited to give lectures. Tao Foundation and TICTU obtained a free license for a GIS working platform from Leeds University. Finally, Dr. Chauchin Lin from the Taiwan Forestry Research Institute led his team in the areas of technical and necessary adaptation.

The twenty participants came from eight tribal communities, made up of six different ethnic groups. TICTU is developing its own GIS platform to facilitate plans to restore indigenous peoples’ traditional territories in the country. This is expected to grow into a full-fledged platform with free software for the use of hundreds of tribal communities in Taiwan, province of China. After the workshop, a draft version of the data collection operational manual was produced in Chinese.

Following up on the Tribal GIS project, a second forum, on 20th October 2015, turned to the subject of identifying information priorities for tribal communities. Dr. John Porter from the University of Virginia, an expert on ecological informatics, big data analysis and wireless sensor network, gave a lecture on his field of expertise.  TICTU is considering working with Dr. Porter on collaborative research, with the goal of designing analysis models for indigenous geographical information.

On 12th December 2015, a study team on environmental education from National Taiwan Normal University visited Pongso no Tao as part of a multi-year research project on indigenous knowledge and native science in environmental education. The team offered a platform that could be combined with OpenStreetMaps in order to locate traditional knowledge. Finally, in Iraraley, in Pongso no Tao, more than sixty traditional Tao place names were restored in their community territories, replacing the imposed Chinese names used by tourists. Much work remains to be done, but we feel we have made excellent progress!