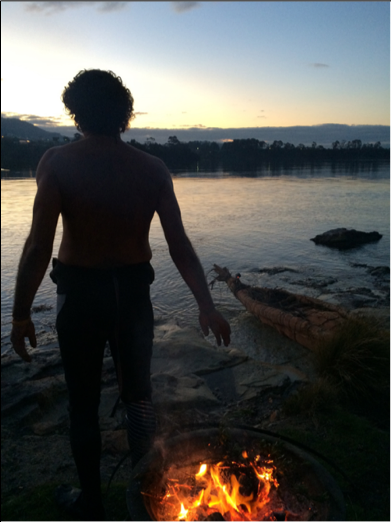 Our peoples, Tasmanian Aboriginal peoples, have suffered global injustice as a genocide group.  The ferocity and intensity of our colonisation was such that Raphaël Lempkin used our experience to help define his 1940’s neologism ‘genocide’ and the terms of the UN Convention on the Prevention and Punishment of the Crime of Genocide (Curthoys 2005; Van Der Wilt et al. 2012).  Although we are survivors of genocide, our continued existence as Indigenous peoples had not been guaranteed or enshrined within Australian legislation. A lack of certainty over our legislated existence has meant that the management of Tasmania’s protected areas has been one of exclusion for our peoples.  This has been particularly evident in our precious TWWHA country, the Tasmanian Wilderness World Heritage Area.  The TWWHA country covers one-fifth of the Tasmanian land mass, or approximately 1.8 million hectares (DPIPWE 2014).  In 1982, it was one of the first properties to be listed as a mixed natural-cultural WHA.  This culturally rich country fulfils seven of the WHA criteria and is only matched by Mt Taishan in China as possessing the most numerous Outstanding Universal Values (OUVs) (Lee 2015).

In 2013, the Tasmanian Government was required to create a new management plan for TWWHA country which would specifically address the World Heritage Committee (WHC) recommendations to improve our access and rights to TWWHA country.  At the time, the conditions of our engagement in TWWHA country management were extremely poor: not one Tasmanian Aboriginal person had a job in TWWHA country, nor was there any on-going program established to manage the cultural OUVs.  The managing agency, Tasmanian Parks & Wildlife Service, even gave themselves the lowest possible rating for any value management.  In a self-assessment performed in 2004, they openly acknowledged their failure to conserve our cultural OUVs (TPWS 2004). To address the WHC’s recommendations, the Tasmanian Government employed, under a two-year contract that began in 2013, Fiona Hamilton as an Aboriginal Liaison Officer (ALO) to create an engagement strategy that would facilitate our active involvement in the drafting of a new plan.  Emma Lee was able to advocate with government and others, as a PhD candidate.  Faced with such adversarial conditions, we decided that the governance relationship between our peoples and the state, federal and international reporting bodies of TWWHA country was so poor that we needed to reset the relationship.  This meant creating a new, whole-of-governance approach that would be all-encompassing and reflect our peoples’ kinship, reciprocity and ways of knowing with TWWHA country.  We would re-centre TWWHA country as core to our governance structures and adopt a process of deep and respectful listening to our peoples, wider communities and elected representatives as we worked to frame a collaborative and supportive approach.

To reset the relationship, we first supported our own peoples to develop a position that would be the voice for TWWHA country. Our engagement strategy saw our peoples’ position as: culture, not politics; family, not organisations; and relationships before agreements.  We have used the language and strategies of family violence prevention and applied it to our TWWHA country.  We had been in an abusive relationship with the governing agencies, but we needed to make our families and communities healthy and functional again.  We introduced love back into our negotiations (because this reflects our love of TWWHA country) and termed our strategy ‘love-bombing’, because we gave the government cultural gifts, strategic advice, and invitations to share in country and kinship.  Even when they did not want it and rejected us, we came back the next day and demonstrated how our peoples can contribute to the Tasmanian economy through our joy, happiness, sustainable business and conservation plans, and willingness to work together.  Never, ever once did we suggest that we were without power to manage our TWWHA country.

The key here is that when you say to the government or the WHC or your neighbours that you are powerless and dysfunctional, that things are really bad and you need money, then no one in their right mind would agree to share power over one-fifth of the land mass of Tasmania.  We instead asked  for a relationship that would support government programs of sustainable development, and we publicly thanked the government, by writing newspaper opinion pieces, for even their smallest efforts to build equity.  We brought our wider communities with us to gain social approval for joint management of our TWWHA country. We also worked extensively on reviving our Aboriginal culture through events, exchanges, and field trips open to the public.  The recovery of canoe-building techniques, after 180 years of being silent, saw ningher canoe launched in celebration of our rights to culture. Our efforts resulted in the first joint management plan of a protected area country anywhere in Tasmania, released for public comment in January 2015.  The TWWHA country plan of management has two key elements: ethics as process, and relationship as model (Lee: forthcoming thesis).  In re-centring TWWHA country as core to governance, we were able to include plural and diverse views that were guided by our Indigenous ethics of kinship and reciprocity.  (Lee: forthcoming thesis).

A Reactive Monitoring Mission (RMM) from the WHC came to TWWHA country in November 2015 and released their report in March 2016 (UNESCO 2016). The report was a scathing review of previous governance and management practices, stating that it is “widely accepted that the cultural heritage of the TWWHA has been playing second fiddle to the natural heritage at all times since inscription” (UNESCO 2016).  However, we were able to explain and demonstrate our ethical processes of engagement in the new management plan for TWWHA country, so that the RMM further noted: “both the quality and the level of participation in the process appear high by global standards” (UNESCO 2016).

Respect for ourselves first has led to respect for others, and this has led to our ability to engage in dignified negotiations that reflect our deep connections to country.  We are now in receipt of huge increases in funding, resources, inclusion and participation opportunities in TWWHA country.  Even more importantly, we are now welcomed as peoples who are no longer considered a problem; with our collaborative framework and our contribution to cultural economies, we are considered an essential part of a positive solution.

Our leadership actions inspired a reciprocity from our governance partners.  In 2015, the Tasmanian Premier made an announcement where he linked TWWHA country ethical processes to constitutional reform (Hodgman 2015).  In Australia, there is great tension over our non-acknowledgment in the constitution Acts of each state and territory, as well as the federal government constitutional Act.  Tasmania is the last of the Australian states to acknowledge our peoples as the First People – the traditional and original owners of country – within its constitution.

In an extraordinary event, and to rectify our non-acknowledgement in the constitution, the Premier of Tasmania, in January 2016, devoted the entirety of his Australia Day Address to our peoples (Hodgman 2016).   In this Address, the Premier stated that joint management of Tasmania’s protected areas country was the preferred model for future conservation.  He also confirmed that constitutional recognition would occur this year (Hodgman 2016).  Both of these changes came as a direct result of resetting the relationship (Hodgman 2016).

In June 2016, the Premier announced the draft text of the preamble to Tasmania’s Constitutional Act 1934:

Recognition is the key theme here and, as part of the peace compact of TWWHA country, it is reflective of the relationships and good governance we want to be part of.  If healthy partnerships develop among the people of Tasmania, based on recognising each other respectfully and ethically, then we will have created a new social and economic pathway for sustainable cultural futures (Lee 2016c).

We are not quite there yet, as the preamble is only a draft.  However, since January 2015, and in less than 18 months, we have been able to take the draft TWWHA country plan of management, an announcement by the Premier, and transform the two into a statement of inextinguishable rights that will frame our constitution.

The ICCA Consortium, with its international scope, was essential in helping us build our capacity to advocate for our rights to participate in TWWHA country management.

We take pride and pleasure in every word of our draft preamble.  Public comment on the terms of our constitutional recognition closed on the 29th July 2016.  More information can be found in this link.

Please contact Emma Lee for more info and the references.