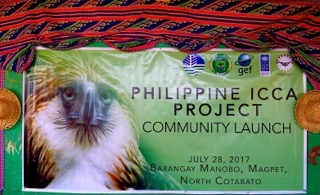 The Philippine Indigenous and Community Conserved Area’s (ICCA) initiative has a new feather in its cap, and that too of the magnificent Philippine Eagle, no less. Symbolically speaking, that is! The ICCA with its local partners in the Mindanao Island of the Philippines launched its latest site at Mt. Apo, the stunningly beautiful habitat of the rare Philippines Eagle. The Manolo indigenous peoples around Mt. Apo have a long history of reverence for the eagles as well as a cultural self-identity built over generations sharing the same habitat. The eagle symbolizes the traits that Manobo people admire in a leader – fearlessness, self-sacrifice, and foresight. The raptor’s presence also provides the necessary basis for identifying and designating sacred and community-protected habitat within the Manolo people’s ancestral home.

The new initiative in Mindanao underlines the strong confidence that ICCA has in bringing ecological development and protection back into the people’s hands as they address the overlap of ancestral lands and portions of their territory declared as National Park. As Giovanni Reyes, the ICCA steering committee member from Philippines, said in a recent communication, “had this project been implemented only by a government agency alone and under a state of war in Mindanao, it would have been “called off”, given the low priority for projects involving indigenous people.” He also emphasized how far ahead indigenous peoples are in comparison to state policy in terms of understanding nature and its role in people’s lives. “The Philippine state”, according to Reyes, “is only 115 years old, its National Integrated Protected Area System (NIPAS Act of 1992) is only 25 years old, the Indigenous Peoples Rights Act (IPRA Law of 1997) is only 20 years old while indigenous peoples’ culture-based conservation practices go back four centuries.” And, that traditional wisdom is showing the way to harmonious co-existence with nature in the Mt. Apo region.

Click here to read the original article on radicalecologicaldemocracy.org