The Froxán Common Woodlands are a community land of 100 hectares (1km2) that is cared for directly by the families that live in this village of the Galician municipality of Lousame, tracing their common roots centuries back. In spite of the influence of invasive species, the community’s territory includes several priority natural habitats under the EU Habitats Directive (including Alluvial forests with Alnus glutinosa and Fraxinus excelsior, Temperate Atlantic wet heaths with Erica ciliaris and Erica tetralix and Arborescent matorral with Laurus nobilis) and other natural habitats such as Galicio-Portuguese oak woods with Quercus robur and Quercus pyrenaica, and caves with numerous bat colonies.

Since 1977, the Froxán Commons has been recognized as a ‘monte veciñal en man común’ (‘common hand community land’). This is a consuetudinary land ownership status, recognized in Galician and Spanish law. The common land tenrure in Froxán can be traced back to medieval and modern manorial charters, issued in 1409, 1527 and 1709, defining the boundaries of community lands and the manorial obligations, although both the institution of Galician common land and the occupation of what today is Froxán predate Roman invasions.

The inhabitants of Froxán collectively extinguished the manorial ties in 1928, buying off the lands for the sum of 6.049 pesetas. However, this ‘manorial redemption’ agreement was not respected by the State, which took hold of the common lands, incorporating them into the Public Woodlands Catalogue in the 1930s and 1940s. This severely restricted traditional rights of use, and in particular communal silvo-pastoralism. Lands were handed over to mining companies, which held concessions over the community territory, and to the State Forestry Service, which established its own plantations prohibiting silvo-pastoralist practices and imposing heavy fines on the commoners. Mining activities produced severe environmental degradation and land disputes that continue today. Invasive forest species, including Acacia and Eucalyptus, were introduced during the same period, and important habitats such a peat wetland were damaged by forced drainage.

Across Galicia, social pressure against forced reforestation programmes led to the legal recognition in 1968 of ‘common hand’ community lands. On April 14 1975, seven months before the death of the Dictator Franco, the entire Froxán community signed a petition to the Civil Governor demanding the devolution of common lands. This occurred in defiance of the Municipality, which legally held the property at the time. In 1977, the Froxán Common Woodlands were formally recognized, and the community gained legal status soon after. Direct assembly governance was established, with one representative of each house making up the collective assembly body. Commoner status is not dependent on property ownership or inheritance, but on effective residency and participation in the village community and collective decision-making. In 2002, the last remaining ties with the Public Administration were broken, finalizing the Forestry Contract that had been inherited from the dictatorship period, and gaining full self-governance of the community lands.

Faced with degradation from mining, the community commenced restoration efforts in the 1990s, and these continue to the present day. Initially, the restoration efforts included filling in abandoned mine pits and shafts. More recently, efforts have been initiated to eradicate exotic invasive species (particularly Acacia melanoxylon, Acacia dealbata, Robinia pseudoacacia and Eucalyptus sp.) that are aggressively expansive and pyrophyte. Eucalyptus plantations are also being removed, as the last productive cycle gives way to restoration with high-ecological-value native species. Work has also commenced to restore a wetland that was degraded by State forest services through drainage and forced forestation. A management plan for the wetland was selected in 2018 as one of 4 pilot case studies of climate change adaptation of natural management initiatives.

Continuing traditional resource uses include gathering firewood, which is used for heating and cooking, and is sporadically sold on a commercial basis generating revenue for the Community; spring water is utilized for household use and irrigation through community owned and managed water infrastructures, and also collected in open deposits for wildfire suppression; gorse (Ulex europaeus) is gathered as ‘molime’ to strawbed (‘estrar’) animal housing and generate manure (‘esterco’) for fields and food gardens; chestnuts (from Castanea sativa) are gathered are roasted during their season and also preserved; wild mushrooms are gathered and preserved (the common land has been designated as a wild mycological production area); certain aromatic and medicinal plants are used for cultural practices, including Midsummer Solstice (St. John’s eve) or Mayday (‘Maios’).

In recent years, the Community has been active in engaging the wider society in its conservation and restoration efforts, particularly working with children, schools, families and environmental organizations. These groups have assisted in reclaiming degraded areas affected by mining activity and invasive species, through participatory reforestation with native species. Through these activities, the community is developing an ongoing programme for education and sustainability (“Montescola”), showcasing the potential of community land-management in addressing pressing environmental and social issues. These issues include climate change, wildfires, invasive species, land and water contamination and degradation, alternatives to rural depopulation, and cultural continuity among traditional rural communities in Galicia. These efforts were recognized in 2017 with the inclusion of Froxán in the ICCA Registry, being the first Community Area to be included in the World Database on Protected Areas (WDPA) after going through a national peer-review process.

The Froxán Commons has also promoted a participatory biodiversity inventory (see related links) and the whole area has been included as a Special Scenic Interest Site (LEIP) in the Galician Landscape Catalogue. In addition to natural heritage, the common lands hold significant cultural heritage that evidences a long history of communal management. This includes a large stone enclosure that has been dated to the Early Middle Ages, which would hold the community’s herds in the higher part of the mountain. Another feature is a traditional water mill that was documented in a 1563 notarial deed. Oral memory testifies to the existence of a megalithic burial mound called ‘Casa Vella’ (‘Old House’) that was likely destroyed by mining in the mid-20th century, and similar megalithic sites are present in the area. An ancient pathway (‘Caminho da Missa’), which has been identified as a possible secondary route of the Roman Via XX ‘Per loca maritima’, also goes through the common Castanea sativa forest, preserved by the modern road that replaced it. 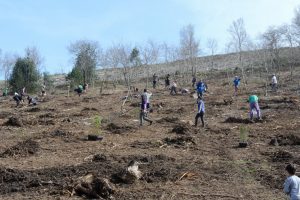 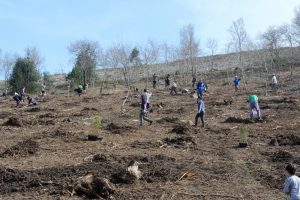 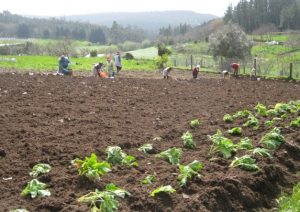 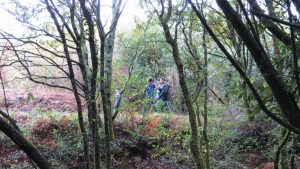 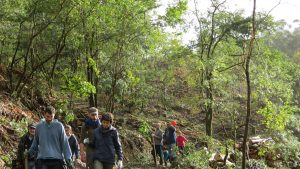 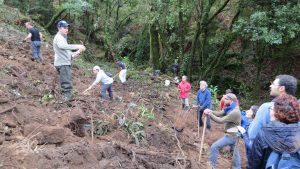 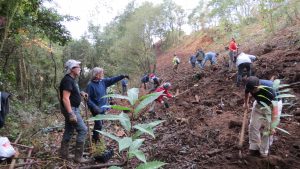 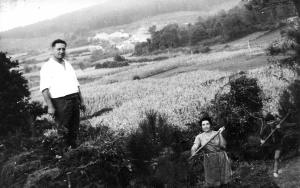