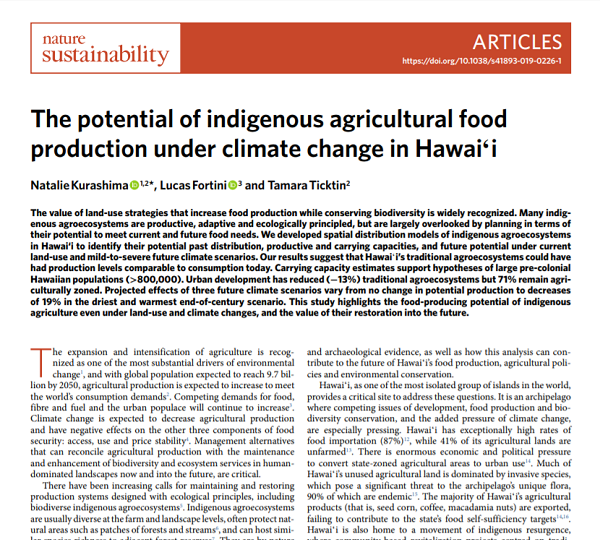 The value of land-use strategies that increase food production while conserving biodiversity is widely recognized. Many indigenous agroecosystems are productive, adaptive and ecologically principled, but are largely overlooked by planning in terms of their potential to meet current and future food needs. We developed spatial distribution models of indigenous agroecosystems in Hawai‘i to identify their potential past distribution, productive and carrying capacities, and future potential under current land-use and mild-to-severe future climate scenarios. Our results suggest that Hawaiʻi’s traditional agroecosystems could have had production levels comparable to consumption today. Carrying capacity estimates support hypotheses of large pre-colonial Hawaiian populations (>800,000). Urban development has reduced (−13%) traditional agroecosystems but 71% remain agriculturally zoned. Projected effects of three future climate scenarios vary from no change in potential production to decreases of 19% in the driest and warmest end-of-century scenario. This study highlights the food-producing potential of indigenous agriculture even under land-use and climate changes, and the value of their restoration into the future.