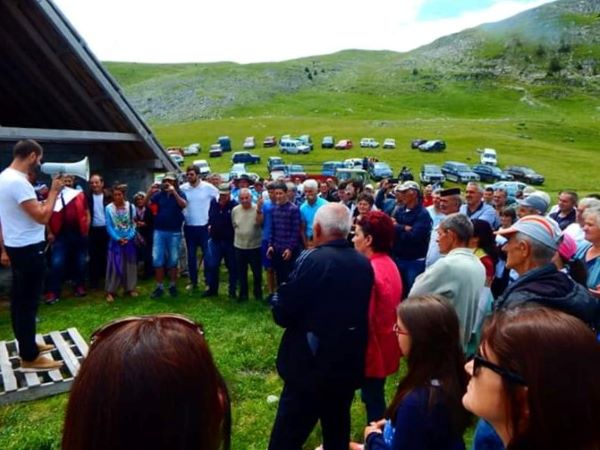 In September 2019, we published an alert about Sinjajevina, Montenegro, where local communities and civil society were organizing to defend their pasturelands and territory of life. The Sinjajevina highlands have been used by pastoral tribes for millennia, but became threatened by government plans to occupy and use it as a military artillery testing range. Our Honorary member Pablo Domínguez tells us how the Sinjajevina communities have been confronting the crisis since then.

The Sinjajevina-Durmitor massif mountain range in Montenegro is a traditional pastoral territory that is being transformed in its southeastern part, into a military training ground. Geographically, the area is unique: it is a high limestone plateau of over 1,000 km², between 1.600 to 2.200 meters above sea level, and it is the second-largest mountain pasture in Europe. Sinjajevina covers 600 km² in the southeastern part of the massif. Its natural and cultural values are widely recognized, as evidenced by the numerous existing and proposed protected areas there. Most particularly, it is at the very heart of the UNESCO protected Tara Biosphere Reserve and is bordered by not one, but two, World Heritage Sites.

But Sinjajevina’s rich bio-cultural diversity is not only a product of nature. It is a symbiosis between ecology and society, the co-production – and heritage – of local pastoralist communities’ governance and management over centuries and even millennia. The pastures are collectively governed by different communities (katun) through assemblies of users (zbor), effectively making Sinjajevina a cluster of pastoral commons or community-conserved areas. Over 22,000 people live in Sinjajevina’s lower lands today, and its highland pastures are used by more than 250 pastoralist families from eight different Montenegrin tribes. In April 2018, an extensive study funded at close to €300.000, the European Union having covered more than two thirds, was presented publicly in Kolasin, one of the five municipalities using Sinjajevina. Its recommendation was that Sinjajevina be declared a Regional Park for the protection of culture and nature, as well as for the enhancement of local economies. The creation of the park was expected to be completed within eighteen months of the study’s finalization. Nevertheless, instead, on 27th September 2019, the Montenegrin Government officially inaugurated a military training ground, over 10.000 hectares in size, in the very heart of Sinjajevina, where Montenegrin, American, Austrian, Slovenian, Italian and North Macedonian, troops engaged in the first international NATO military training, when civilians and shepherds were still present with their flocks on the highlands, some of which were reported to have been lost in the chaos of the shooting and military maneuvers.

The appropriation of this land took place with no publicly available environmental, health, or economic impact evaluations, no public explanation for the exemption of these, and without any substantial negotiations with the affected pastoral communities, in a clearly inadequate legal process.

In a rapidly organized social response, more than 3.000 Montenegrin citizens signed a petition circulated by local associations and the main environmental organizations of the country, along with an emerging group of activists. Although this number of signatures met the requirement needed for the Montenegrin Parliament to accept an issue into debate, the petition was completely ignored to everybody’s disconcert. All this process triggered the official creation in August 2019 of KOR, the Montenegrin federation of civic society environmentalist organizations, and in January 2020 the creation of the Save Sinjajevina Association, all asking the military encampment to be stopped. Approximate position of the military ground, and borders of the proposed and existing protected areas.

Turning to the European Parliamentary Committee for Stabilization and Association: an EU Delegation meets with Montenegro’s Parliament

The Montenegrin Sinjajevina defenders included Mileva Jovanovic, a local farmer of one of the most important pastoral commons of Sinjajevina; Aleksandar Perovic the Director of Ozon, the most important environmental NGO in the country; Gordana Kasom the Director of the study about the creation of a Regional Natural Park in Sinjajevina undertaken by the Agency for Nature and Environmental Protection of Montenegro with the EU’s funding aforementioned; and Mileta Radovanic, the Secretary General of the URA Party, the Greens of Montenegro with representation at the national Parliament. This meeting added greatly to the EU’s first-hand knowledge and understanding of the situation, and served to motivate further the EU’s defense of Sinjajevina at the Montenegro-EU inter-parliamentary session in Podgorica on Wednesday 26 February.

In fact, after two days of intense meetings, the inter-parliamentary EU-Montenegro commission issued a joint Declaration, with recommendations for the Montenegrin Government to guide the country’s advances in terms of rule of law and political procedures, and to align its national policy with the European Union’s adhesion requirements.

Among other issues, the Declaration emphasized the importance of respecting EU standards, particularly concerning Chapter 27 on tackling climate change and environmentally related challenges, as Montenegro is considered highly deficient in this area. The Declaration expressed particular concern about Sinjajevina, advising that: “Utmost caution is called for in UNESCO-protected areas, including the Tara River and the Sinjajevina mountain area, where in September 2019 a military training and weapons testing area was established within the UNESCO Biosphere Reserve”.

The Declaration further emphasized the importance of “preserving the cultural and pastoral traditions of local communities”. At the same time, the EU underlined “the need for an independent study of the social and environmental impacts of the military landfill in Sinjajevina”. And yet, the Montenegrin Parliament, backed by the deputies of its pro-government majority, refused the call for an independent study. It should be noted that the opposition in parliament is currently  diminished due to the ongoing boycott by elected representatives who are, at the same time, challenging the legitimacy of the whole electoral system in Montenegro.

‘The need for an independent study’ was one of the very few EU points the Montenegrin Parliament did not endorse; one other being the protection of Sinjajevina. The Montenegrin government’s unwillingness to cooperate with the EU in the particular case of Sinjajevina seems to isolate Montenegro further from EU standards and international policies in relation to the environment and civic society participation. The current situation echoes the criticisms made by the EU in the past, as well as those made by the UNESCO’s World Heritage Centre and IUCN Advisory joint mission in its 2018 report. Parallel to this important EU milestone and EU public stand in favor of Sinjajevina, a website has been created. Sinjajevina.org is born out of a group of scientists, NGO activists, farmers, politicians and ordinary citizens wishing to provide a reference point for rigorous and reliable information on the territory’s unique socio-ecological value and the ongoing crisis, as well as to gain public recognition. In fact it also aims to serve as a clearing house for interested journalists, politicians and international agencies among others. Alongside this effort, and always linked to the Sinjajevina case, an environmental justice atlas entry has been created.

The crisis in Sinjajevina is now featured on a YouTube channel as well, with scenes of local people opposing the artillery ground and sharing their traditional knowledge about the highlands, such as the medicinal uses of plants, and other skills and resources in the territory – cultural treasures that will be lost if the militarization of Sinjajevina continues. Also, currently, an emerging international campaign about Sinjajevina is being launched and is set to broaden in intensity in the months ahead thanks to the support of the Land Rights Now international alliance campaign that has also officially agreed to back up this case. Finally, there is also a new blog post that has been created explaining Montenegrin Government’s flawed decision-making process and the legal breaches in the decision to militarize Sinjajevina.

Although our world is now in the grip of a terrible pandemic, the alarm about Sinjajevna is growing. Local farmers, civic society organizations, universities and research centers, political parties, and international organizations, are certain to become active in public gatherings when the coronavirus confinement period ends. In the meantime, the strengthening of Montenegrin networks and the growing international awareness of the case continues expanding on the internet and social, political and scientific platforms, awaiting the day when it will again be safe to defend cultural traditions, protect the natural world, and protest injustice openly.

*Pablo Dominguez is senior researcher of the Laboratoire de Géographie de l’Environnement (GEODE) from the University of Toulouse, France, and an associate researcher of the Social and Cultural Anthropology Department (AHCISP-ASiC) / Institut de Ciència i Tecnologia Ambientals (LASEG-ICTA), of the Autonomous University of Barcelona, Spain.