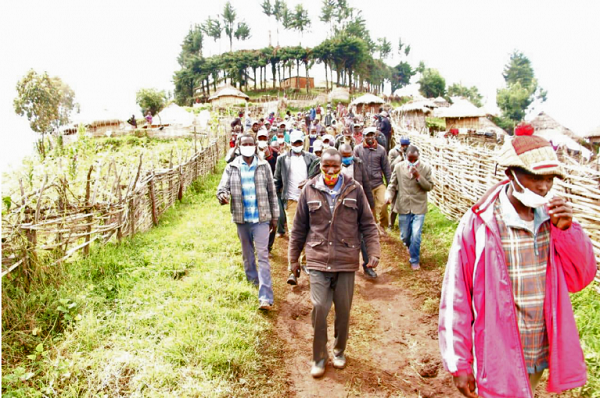 The ICCA Consortium joins more than 150 other organisations in signing a solidarity statement condemning the Kenyan government’s forced eviction of Ogiek and Sengwer families from their homes and ancestral lands in the name of conservation.

As cold weather prevails mid-year in Kenya and temperatures plummet in the highland territories of Indigenous peoples and forest-dwelling communities, COVID-19 is surging across the East African country. But rather than being able to shelter safely in their homes, hundreds of families were evicted from their ancestral lands and their homes and farms destroyed by their own government in early July 2020.

The Kenya Forest Service (KFS) reportedly demolished over 300 Ogiek homes and destroyed fences, farms and livestock in the Mau Forest. Children and other vulnerable community members have been left homeless during the pandemic.

HAPPENING NOW: Since last week over 300 Ogiek were brutally evicted in the Mau Forest, Kenya. @KeForestService & @KenyaGov are disregarding the African Court ruling and #Covid_19 regulations, evicting people illegally. The world is watching. This has to stop. #IStandWithTheOgiek pic.twitter.com/Y0MbdN2MnU

In Embobut Forest in the Cherangany Hills, the KFS reportedly burned 28 Sengwer homes on 10 July, including their blankets, utensils and other essential belongings.

In both cases, the Kenya government has argued that the evictions are necessary in order to conserve the Mau and Embobut Forests, which are large closed canopy forests and important watersheds. The government has repeatedly claimed that preserving this ecosystem takes priority over land claims of the Ogiek, Sengwer and other communities. This flies in the face of a growing body of evidence that honouring land rights is the foundation for equitable and sustainable conservation of forests.

In its May 2017 judgment, the African Court of Human and Peoples’ Rights declared that the Ogiek were not responsible for the depletion of the Mau Forest, and conservation of the forest could not be used to justify the Ogiek’s eviction, nor could it be used to deny their rights to practice their traditional livelihoods. The Court also ruled the Mau Complex was indeed the ancestral land of the Ogiek, to which they therefore hold rights.

Likewise, the Sengwer’s traditional knowledge system – now articulated in written bylaws – has long conserved their forest home. Like the Ogiek, this forest-dependent community still holds intact forest sacrosanct even as their ways of life have been undermined by decades of government policy, which have left the forests vulnerable to illegal logging, poaching and encroachment by outsiders.

Several organisations and networks have spoken out about these violations. A group of eight Kenyan and international human rights and conservation organisations issued a statement on 13 July 2020 expressing grave concern over the forced evictions and burning of 28 Sengwer homes, particularly in light of the Presidential declaration of a moratorium on evictions during the COVID-19 pandemic.

He calls for international pressure on @KenyaGov to immediately stop the evictions of indigenous people from their ancestral lands. #IStandWithTheOgiek pic.twitter.com/Mej6DLpTIg

CLAN’s statement asks that the government of Kenya:

For more information, refer to national, regional and global news coverage such as:

Updates will be added here as more information becomes available.

Featured image: Sengwer representatives walk out of a negotiation meeting in early July 2020 after attempted intimidation by the County Commissioner and UN Development Programme representative. © via Forest Peoples Programme.