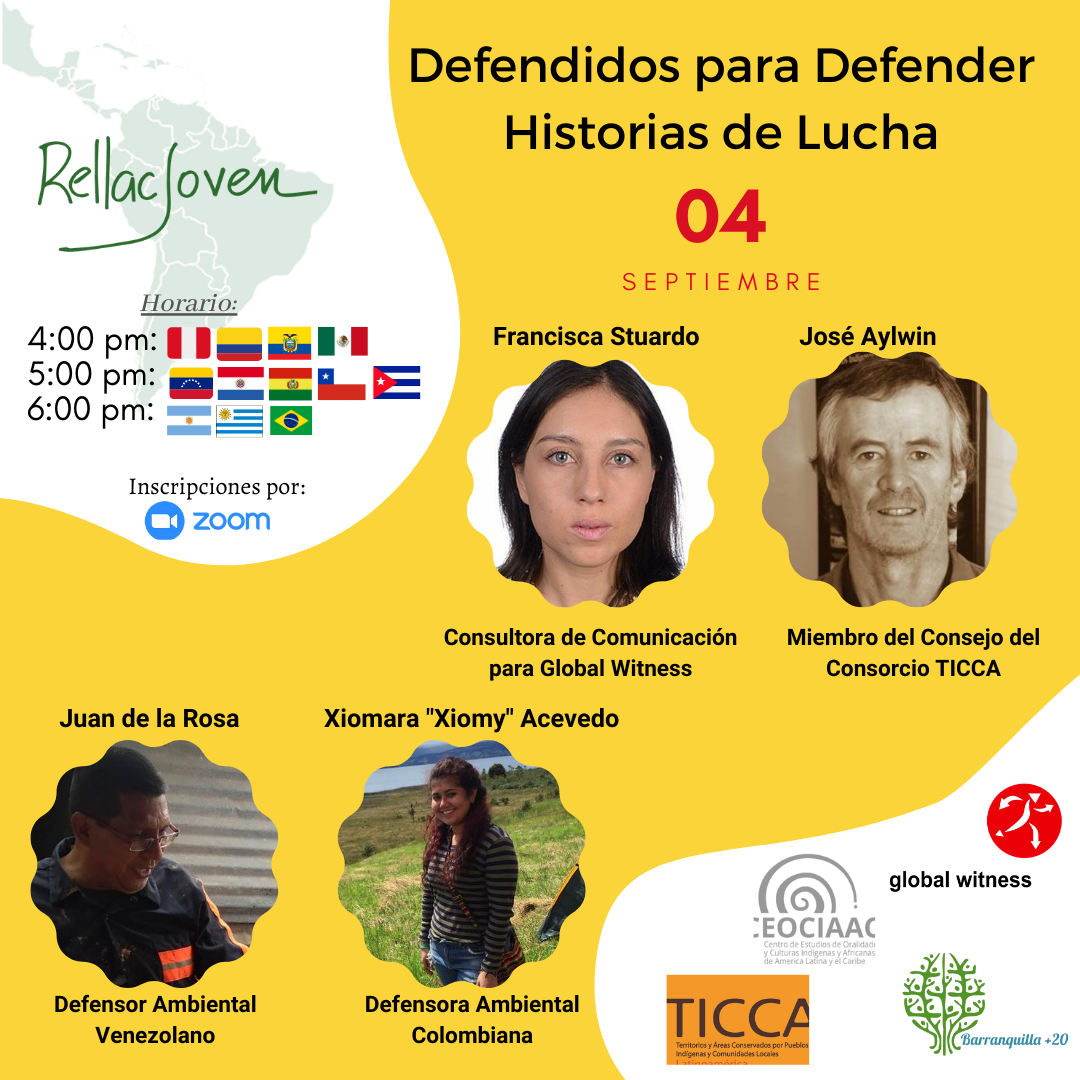 Perspectives from the webinar on defending nature defenders. RELLAC-Joven organised the webinar together with the ICCA Consortium, Global Witness and activists from Colombia and Venezuela.

The people who defend nature also need to be defended. But how well do young people know about the kind of challenges our environmental defenders encounter, how they deal with those challenges, and what new challenges are coming up in the future?

To discuss these issues, the youth-based nature conservation group RELLAC- Joven has organised a webinar on 4 September, 2020 together with the ICCA Consortium, Global Witness, and activists from two of the most dangerous countries for defenders; Colombia and Venezuela.

RELLAC-Joven is a network of young leaders in protected and conserved areas of the Americas. The youth initiative has individual and organisational members in nine countries who are working to influence public policy to protect the territories of life.

This webinar was organised out of concern based on the findings of the report Defending Tomorrow: The climate crisis and threats against defenders of the land and the environment.

The report by Global Witness shows that seven of the ten most dangerous countries for environmental defenders are in Latin America, accounting for 145 of the 212 murders recorded worldwide. Also, when analysing the events and documents according to the population by country, Honduras, Colombia, Nicaragua, and Guatemala lead the top 5 along with the Philippines. Sadly, Latin America is the most dangerous region since 2012, when Global Witness started documenting killings and violence against environmental defenders.

Based on the presentations of the speakers, we have identified three main conclusions:

These are documented cases, but what about those that have been forgotten, silenced, or are unknown because of their remoteness and have not come to light? In how many places have we walked, lived together, and on their ground bear the mark of a fallen defender?

Protection for the protectors is a must. If we don’t take care of the environmental defenders who will continue to take the lead in protecting nature? If we do defend the defenders, we will be also in fact taking care of our lives.

These virtual meetings were successful because of the participation of different organisations, which represent the best tool to make visible the environmental and social problems that we go through in Latin America and the Caribbean concerning protected areas.

Exposing the problem is only the first step in advancing legal matters for the total defence of our spaces and all the life they shelter.

Featured image: The poster of the webinar
Translated from Spanish