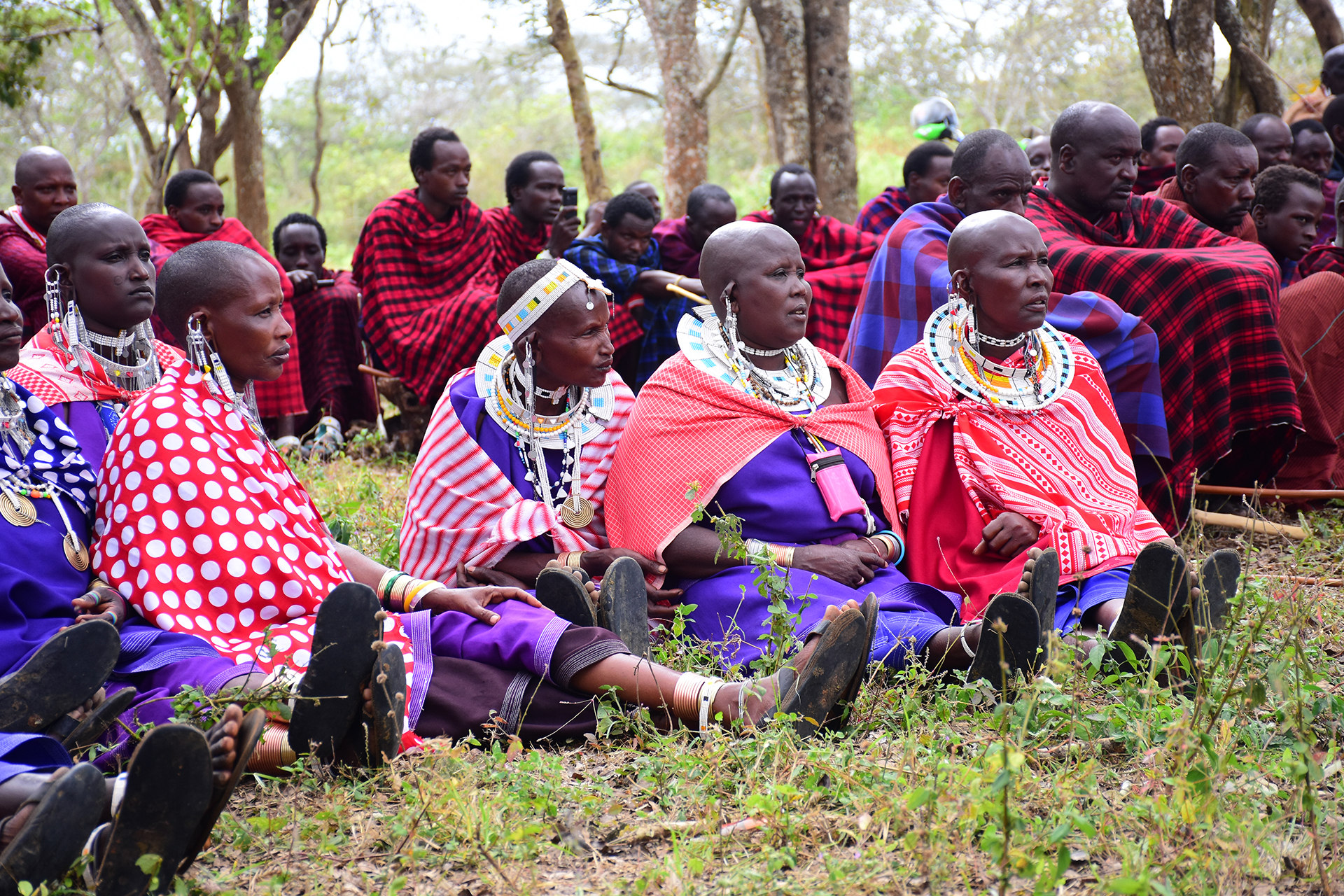 Villagers at a ceremony to receive certificates of Communal Rights of Occupancy in Olengapa ICCA in the Kiteto district. Photo: TNRF

In Tanzania, Global Support Initiative for ICCAs has supported thirteen projects over the last two years to strengthen the territories of life.

At Tanzania Natural Resources Forum (TNRF), we have been relentlessly working with communities and partners to supporting and strengthening Indigenous and community conserved areas and territories (ICCAs) in Tanzania.

After a competitive process, Global Support Initiative for ICCAs engaged TNRF in 2017 as the national partner organization in Tanzania. Since then in collaboration with UNDP Tanzania and ICCA-GSI, we have been promoting the recognition of ICCAs and improving the effectiveness of governance in these territories of life.

In 2018, TNRF conducted assessments of ICCAs in Tanzania. The assessment identified a list ICCAs to work with and support through the ICCA-GSI initiative. Till now, the initiative recruited thirteen member organizations and projects to scale up. Members received funds through UNDP Tanzania at different times to implement various initiatives. The efforts delivered positive outcomes for biodiversity conservation, sustainable livelihoods, and resilience to climate change effects in Tanzania’s ICCAs.

Here we are presenting a summary of results that have been achieved till now.

The villagers of Olengapa ICCA in the Kiteto district secured land rights over an area of more than seven thousand hectares. Local organization KINNAPA led the activities and helped the community to acquire nine certificates of Communal Rights of Occupancy (CCROs) for Cattle Grazing Areas (Alallilis) and sacred sites. Villagers at a ceremony to receive certificates of Communal Rights of Occupancy in Olengapa ICCA in the Kiteto district. Photo: TNRF

In the Kilosa district of Morogoro region, we supported Indigenous communities’ efforts to protect an ICCA of an area of fifty thousand hectares and home to pastureland that benefits at least ten thousand people. The Parakuiyo Indigenous Knowledge for managing grazing lands and wildlife project was led by Parakuyo Pastoralists Indigenous community Development organization (PAICODEO).

The community has developed a plan to manage traditional grazing land. The natural resources within the ICCA include livestock pastures, medicines, water, wild animals’ habitats, wildlife corridor, cultural practices for the present and future generations. 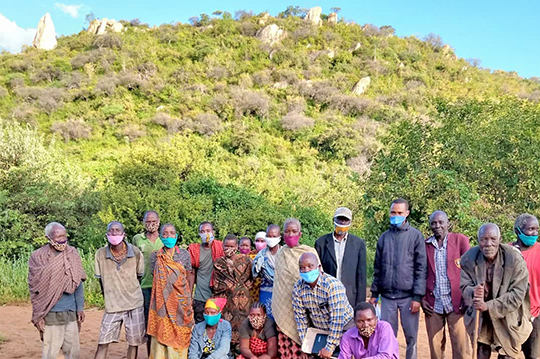 In Mongo wa Mono forest of Mbulu District in the Manyara region, TAPHGO — another ICCA-GSI member in Tanzania— supported hunters and gatherers community members to review customary laws. They have developed a management plan to integrate traditional and formal mechanisms of managing forestry resources in hunting and gathering areas.

In the Kitumbeine administrative ward in the Longido district of the Arusha Region, the ICCA-GSI initiative supported ten Indigenous villages for the locally-led restoration of community forests. Ilkisongo Pastoralist Initiative (IPI) has implemented the project in the Ketumbeine forest. The restoration process including participatory map-making was led by the community. GSI funding provided eight thousand tree seedlings to improve community forestry.

In Kwamtoro of Chemba district in Dodoma region, we supported the community to document and map medicinal plant areas in the ICCAs. The ICCAs in Kwamtoro provide the community with both forest and non-forest resources including Firewood, honey, edible mushrooms, and wild fruits. Local community-based organization UMAKWA has coordinated the activities. These heritage sites range from rock paints, singing rocks, baobab caves, spirit’s beehives, old tower/fort, hot artesian well, footprints on the rock, soft rocks suitable for artwork, and ‘kimondo’ water holes. All these sites were documented and are in the process to be advertised through the Ministry of Natural Resources and Tourism. The sites will be presented to the public as the contribution of Indigenous knowledge in conservation so that the communities can benefit from these sites.

In Bunda district’s Mara region close to Serengeti National park, LCEDS, a local NGO, led the rehabilitation of the solar-powered Nyatwali irrigation scheme. It has improved community conservation initiatives and livelihood within ICCAs. In the long term, this improved water-infrastructure will contribute to the protection of wildlife and reduce illegal wildlife poaching.

Improving the quality of Pastures in rangelands

In Olengapa ICCAs of Kiteto district in Manyara region, communities have grown an Indigenous grass species to improve pastures. A total area of one acre in each of the four participating villages has grown grass-plot. This native grass species buffelgrass (Cenchrus ciliaris) has high biomass, produces more seed, and is acclimatized to semi-arid environments of the rangelands. The project was led by the local community-based organization KINNAPA. Gathering of women leaders as part of community members surveying the sacred sites and grazing areas for calves during the demarcation process in Olengapa ICCA. Photo: TNRF

Resolution of land-use conflicts and empowerment of women

In the Kiteto district of the Manyara region, we have supported SULEDO Community Forest Reserve’s initiative to resolve land-use conflicts. Nine dedicated grazing lands for calves and weak or sick animals and sacred sites were demarcated with land-markers. These sites have a total area of 7,330 hectares in four villages. Also, the SULEDO Community Forest demarcated 167,416 hectares of land by installing thirty-five land-markers in eight villages.

The process addressed the conflict among pastoralists, farmers, and other land users within the ICCA. As most of the calves and sick animals access pasture close to households, the initiative also ensured that women from the Indigenous community now can securely access milk and food throughout the year.

Improvements of livelihood options within ICCAs ICCA-GSI supported the construction of 104 beehives and a rainwater harvesting tank throughout Engang’uengare village in the Suledo community forest area. A total of thirteen beekeeping groups have been formed. A total of 169 men and 91 women are members of these groups. Beekeeping is expected to generate significant income to sustain their families.

The outcomes of ICCA-GSI projects in Tanzania have been captured by various local media, including television, radio, newspapers, blogs, and disseminated widely to influence policy and practices. Also, the impacts of the ICCA-GSI projects in Tanzania were reported by regional and global platforms during the process of documentation. Various Indigenous peoples initiatives have been documented in the case study titled I Look at our Future as Pastoralists with Confidence.

In addition to these specific projects, we are mentoring the member organizations of ICCA-GSI in Tanzania for institutional capacity building. We will continue working with ICCA-GSI members in Tanzania, partners, and communities to strengthening and supporting conservation management of the selected ICCAs.

Featured image: Villagers at a ceremony to receive certificates of Communal Rights of Occupancy in Olengapa ICCA in the Kiteto district. Photo: TNRF