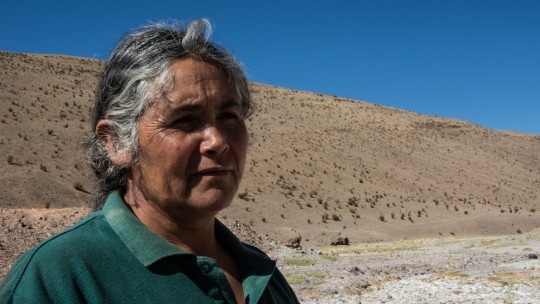 The Colla are a legally recognized Indigenous People who live in the Atacama Region of northern Chile. While their ancestral territory stretches across more than 800,000 hectares, the Chilean government has only granted the Colla title to roughly 9,000 hectares of land. As pastoralists, the Colla migrate with their livestock through the high Andean valleys, moving between the cool mountain pastures in the warm seasons and lower altitude wetlands in colder months. Because of this system of migration, each of the 55 Colla communities needs a significant amount of land.

However, because the Chilean government has not legally recognized even a tenth of the Colla’s Indigenous territory, their territorial sovereignty has not been respected. Chile has allocated mining concessions to no fewer than six separate mining companies that are currently prospecting within the Colla’s ancestral territory, mining wetlands and lagoons that should be protected areas under national law. The Kinross Company, a Canadian gold mining firm, operates three projects within the ancestral lands of one community, the Colla de Pai-Ote.

Between 2007 and 2013, Kinross emitted a significant amount of mercury (PDF, Spanish language publication) into Colla de Pai-Ote’s local waters; these emissions made it the second-largest emitter of mercury in Chile. Community members became ill and their animals died from drinking the mercury-contaminated water. In response to complaints filed by the community, a Chilean environmental agency declared in 2016 that Kinross was responsible for the mercury contamination and ordered the company to clean it up. In 2012, Kinross began prospecting for new open-pit mining sites in the area. This work was part of its ‘La Coipa Phase 7’ project, which was projected to return investment of US$200 million.

In its environmental impact assessment for Phase 7, Kinross argued – based on government maps of recognized Colla territory, and despite knowing that its previous activities in the same area had contaminated the Colla de Pai-Ote’s waters– that there were no Indigenous communities in the impact area of the project. This argument was accepted by the Chilean government and the project was permitted to continue.

The Observatorio Ciudadano (OC) is a Chilean NGO that challenges human rights violations in Chile and Latin America, with a particular focus on the rights of Indigenous peoples and local communities. When Jose Aylwin, the coordinator of the Globalization and Human Rights Program of the Observatorio, met Ercilia Araya, Colla de Pai-Ote’s leader, at a parliamentary meeting in Santiago, she told him: “My community is an Indigenous conservation territory, and we have ten mining [operations] there, most of them Canadian, and we want you to come and see and to work with us.”

OC collaborated with the Colla de Pai-Ote community to document the impacts of the Kinross mine on the community’s territory, animals, and resources. They also recorded harassment of Araya and her family by the police, who repeatedly threatened her with judicial prosecution for her activism.

To address the contentious issues related to the mine, OC and the Colla de Pai-Ote community worked together to carry out a Human Rights Impact Assessment (HRIA) on La Coipa Phase 7, which will soon become operational.

A Human Rights Impact Assessment identifies the potential or existing impacts of a company’s operations on the human rights of affected families and communities. Normally, a corporation carries out its own social, environmental, and human rights impact assessments as part of its due-diligence processes in preparation for investment.

A community-instigated and community-led HRIA process, however, ensures that the impacts identified are those experienced by the community, and empowers community members by helping them link the violations they have experienced to national and international laws protecting their rights. The Colla are pastoralists who migrate with their livestock through the high Andean valleys (Photo: Gerardo Berrocal ADKIMVN/ Observatorio Ciudadano, CC BY 4.0)

With the support and facilitation from OC staff, the Colla de Pai-Ote community studied and discussed all applicable Chilean and international law; interviewed community members and representatives of the Canadian Embassy in Chile; and communicated with Kinross’s Chilean representatives. This information was supplemented by publicly available government files such as those concerning the verdicts and findings of court cases and the outcomes of environmental impact assessments.

In the resulting HRIA, Colla de Pai-Ote community member Segundo Araya Bordones alleges: “Where the big mining companies were extracting [water] there were beautiful plains, large water lagoons, marshes… [Now,] nothing is left [but] pure soil, everything is bare… they are drying up the water tables.”

In particular, it found that the government of Chile had failed to recognize and safeguard the land rights of the Colla de Pai-Ote community as well as its right to Free, Prior Informed Consent (FPIC) in the context of Kinross’s mining operations, as required under the Indigenous and Tribal People’s Convention of the International Labour Organisation (ILO-convention 169).

The HRIA also alleges that the Canadian state (where Kinross is domiciled) failed to uphold its extra-territorial human rights obligations. Finally, the report alleges that Kinross:

The HRIA found, as a consequence of these alleged violations, that: “The livestock economy, which constitutes the material and cultural basis of the way of life of this community, is at risk due to the potential contamination of the waters; the loss of territory; the construction of power lines on vegas [meadows]; the difficulties of access to summer areas due to the closure of roads; the drying out of meadows and wetlands as a consequence of the extraction of freshwater for the mining process, [all of which affect the] biodiversity and the traditional productive system of the Colla communities.”

In response to written questions submitted by the OC about its policies and operations, Kinross representatives stated: “We work to avoid all potential negative impacts on the land rights and interests of Indigenous communities… The company strictly observes the obligations established by national legislation in terms of evaluating the impacts of our projects.”

Using investment chain mapping to amplify the power of the HRIA

Investment chain mapping is the process of documenting the web of global actors that make a company’s project possible. While the most visible actor in an investment chain is the business managing day-to-day operations, behind that business are other actors, including:

At each point in the investment chain, negotiations take place and decisions are made. If complaints made to local and national authorities or the business itself have limited success, communities can take their complaints to other actors in the investment chain. Each entity in the chain could be a pressure point, creating leverage for communities to change corporate behavior.

OC mapped Kinross’s investors, which include Deutsche Bank AG, Bank of Nova Scotia, Morgan Stanley and Norges Bank, all of whom are participating members of the United Nations Global Compact and must therefore adhere to its 10 principles, which include “the support, respect, and protection of internationally proclaimed fundamental rights,” (Principle 1), and require that project partners and collaborators are not complicit in the violation of those rights (Principle 2).

OC’s message for other grassroots land defenders standing up to rights violations by private sector actors is clear: if you have a human rights-based analysis and an investment map, you can explain which rights are being violated, see the various actors involved, and then have a much better chance of making an impact. They are very complementary tools!