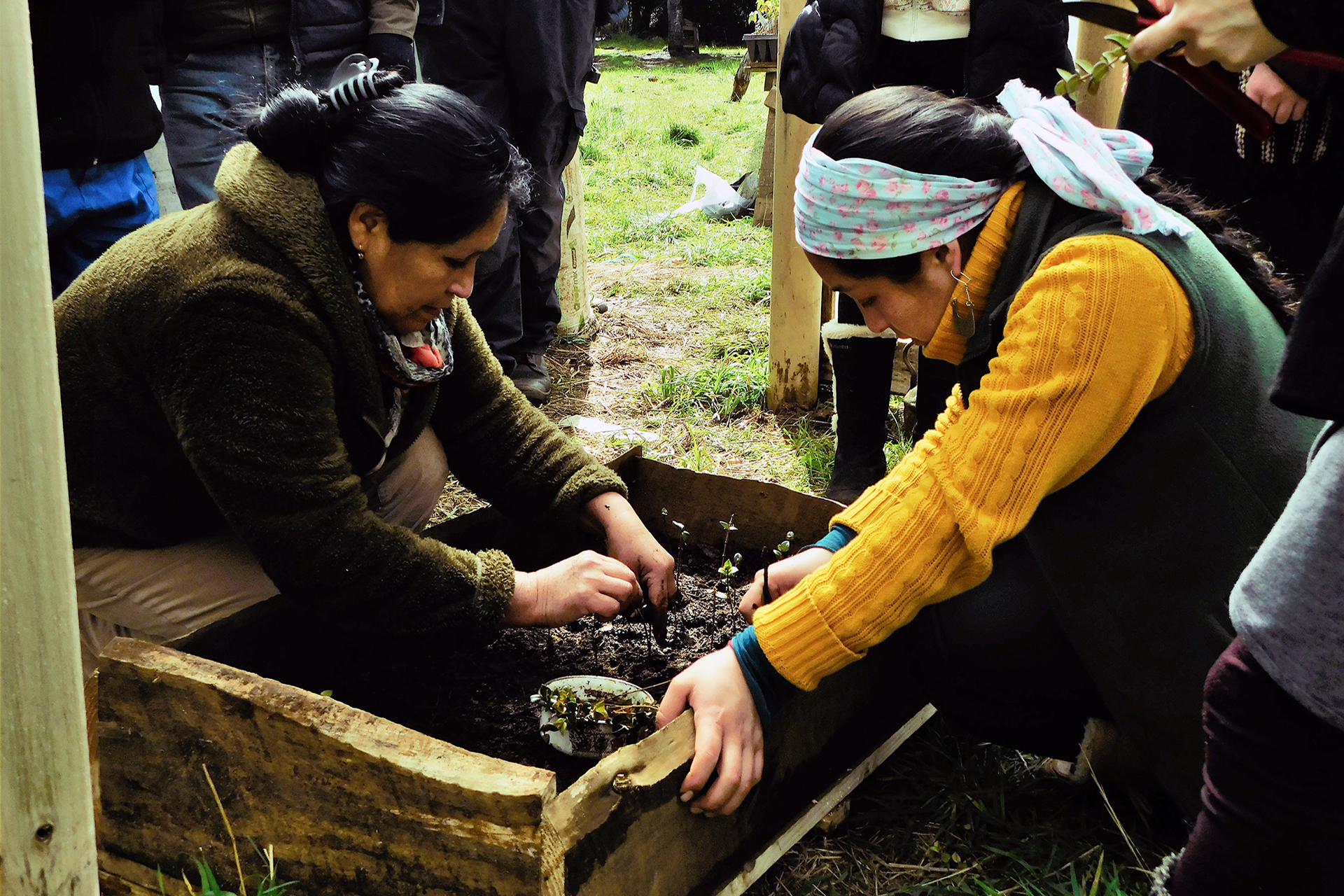 Learn about the Budi Anumka Association, an initiative led by Mapuche-Lafkenche Indigenous communities for biocultural restoration in Lake Budi

The Mapuche-Lafkenche communities in the southern area of Lake Budi founded the non-profit organization the Environmental Association Budi Anumka in 2019. The founding communities are from our ancestral Ayllarewe Budi territory; currently, Teodoro Schmidt municipality in the Region of La Araucanía of Chile.

Through education, research, and dialogue of knowledge with our Kuifike Kimün (ancestral wisdom), we want to continue the defense of the biocultural heritage or Itrofillmonguen of our territory, the inheritance of our ancestors, and a fundamental pillar of our Mapuche way of life.

Budi (56.2 km²) is a brackish coastal lake system sporadically connected to the sea. The lake has unique geological (including traces of the 1960 earthquake), archaeological (linked to pre-Columbian settlement), and ornithological features. It was declared a Conservation Priority Site and Ramsar Candidate in 2002. Budi’s connection to the Humboldt oceanic current and its association with the temperate forests make it one of the most diverse low-lying wetlands in Southern Cone.

The conservation of Budi’s unique brackish-lake ecosystems is a key to the survival of Patagonian coastal and temperate forest ecosystems. Endemism is high in the lake region. Lake Budi is home to 180 species of flora and 156 fauna, some Vulnerable and others Endangered, such as euryhaline fishes Lisa (Mugil cephalus), Huaiquil (Micropogon furnieri), and silverside (Odonthesthes sp.), among others. The Lake also hosts Vulnerable migratory bird species such as the Swamp Raven (Plegadis chihi), Painted Becacina (Nycticryphes semicollaris), Coscoroba Swan (Coscoroba coscoroba), and the Black-necked Swan ( Cygnus melancoryphus ), among others, which depend on the local biodiversity and aquatic plants to survive their extensive seasonal journeys to Central and North America.

For us, most importantly, the Budi territory is our Territory of Life. Here, the Ayllarewe Budi (Nine- Rewe or Altars of Budi) is alive still today through biocultural norms and ceremonial practices that are linked to a deep process of reconstruction of the kimvn (ancestral wisdom) through the recovery and revaluation of the biodiversity of endemic flora species with traditional economic and medicinal uses. Some of them which are Vulnerable, such as the chupon or kay (Greigia sphacelata), are used in the fine local basketry, where the pilguas or wilal stand out, with an emerging market as eco-bags. These plant species have ancestral use and are beginning to be recovered through their propagation and sustainable management by the families themselves.

However, the lack of public policies for the conservation of Indigenous territories, the pressure of intensive agriculture, and the degradation of riparian zones by overgrazing and unregulated extraction of timber resources have caused a total transformation of our landscapes. Currently, the landscape is made mostly of slopes converted to the certified monoculture of potato cash crops planted down to the very shores of the lake. This has led to biodiversity loss, pollution of our sacred springs (menoko) by runoff, and the fatal eutrophication of the lake. Fishing was a very appropriate economic activity in the lake region until a few years ago. But pollution of water bodies and ecological imbalance has made fishing something almost unknown to our children nowadays.

Facing this, the founding Lafkenche communities of Budi Anumka have reaffirmed their decision to continue the permanent defense of the Itrofillmonguen or biocultural heritage of our territory, the heritage of our ancestors and a fundamental pillar of our Azmonguen or Mapuche way of life, which our grandparents defended, managed and bequeathed upon us, so that we can carry on for the new generations.

Through education, research, and a dialogue of knowledge with the Kuifike Kimün (ancestral knowledge) of our authorities and territorial custodians, we make visible and project Mapuche initiatives for the reconstruction and defense of biodiversity and the biocultural heritage of the ancestral territory Ayllarewe Budi, exercising the Mapuche self-governance through the Azmapu, revalidating the role of the territorial authorities of each Lof and each Rewe (Ceremonial Center) as political instances of the Ayllarewe Budi.

For us as Mapuche, all the elements of nature are vital. In our worldview, everything is alive: soils, lakes, oceans, rivers, water springs, forests, wetlands, flora, and fauna, and together they allow us to live in balance and fullness. The balance of each of these elements on earth is intrinsically linked to the health and integral development of the Mapuche in the earthly and spiritual aspects. The survival of future generations depends on continuing to recreate and safeguard livelihoods coexisting with our natural environment; what we conceive of as Good-living or Kvmemongueleal. This will allow us to contribute to mitigating climate change while adapting resiliently.

The proposed initiative is territory-wide, hence will be addressed in a gradual and phased manner. The hands-on learning by the local team will allow us to develop a multidimensional strategy and consolidate a replicable model in the more than one hundred Lafkenche communities around lake Budi. In the first stage, restoration work in the pioneer communities will be prioritized, and then, through dialogues and mutual learning, give way to the other communities that want to join in. In this way, the consolidation of a self-managed model by the Lafkenche communities themselves will have incremental impacts on the conservation of biodiversity and biocultural diversity.

The Budi Lake wetland forms a system with high connectivity to the contributing basins, which makes it necessary for its conservation to manage restoration corridors and buffer areas to maintain the structural connectivity of the landscape, expand protected habitats, and improve the quality of water and soil by controlling runoff. This means that the coordinated participation of local communities and the commitment of smallholders in the zoning and restoration of their family fields around the wetland must be a central objective for the conservation of the Budi.

Consensus-based and inclusive planning will increase the community-conserved area of habitats for at least ten iconic species in IUCN conservation categories, while protecting local cultural values and uses, linking direct beneficiaries, and strengthening protocols for inclusive governance for the protection of the entire Budi Wetland – 2,807 ha, equivalent to 24.7% of the wetlands on the coastal area of La Araucanía.

On the other hand, it is crucial to reestablishing, starting with the experience of the pioneer communities, coherent and sustainable ways of relating to the economic and cultural uses of biodiversity and vegetation cover of nuclear zones and buffers, through the famous wilal bags and fiber fabrics, the products derived from native berries, and eco-cultural tourism, which come to complement subsistence activities carried out in ways that are compatible with the goals of conservation of corridors.

Throughout this challenging year, the Mapuche Environmental Association has been leading a new project initiative linked to the restoration and conservation of our homelands of Lake Budi wetlands, a mission, as we know, that has become more relevant than ever. Healthy wetland ecosystems can hold three to five times more carbon than the equivalent area of forests and for thousands of years! In the case of Budi, her wetlands provide crucial refuge for hundreds of species as well as livelihoods and a buffer from floods and drought to local fishing communities. A direct way to support the conservation of Lake Budi

The award-winning PicParks.com project began with the vision of “preserving the community” through an online mapping platform.

Through this effort, supported by the NGO Maple Microdevelopment Chile, we are co-designing a model where the Mapuche-Lafkenche communities of Lake Budi can begin to manage and measure for themselves the areas preserved to counteract the causes and effects of climate change.

By supporting with a community restoration “pic”, you can do your part to counteract climate change measurably, while supporting the Indigenous coastal communities of southern Chile (a country among the most unequal and vulnerable to global warming) to mitigate its impacts and gain resilience over the next 20 years. But we have to start now!

Do you want to join us? We hope you do!

Option 2: Meet the lands and project through the mapping system, and then preserve

Option 3: For more information on this campaign, please contact alison.guzman@maplemicro.org

Please see our video (You can click on the subtitles if needed) to learn more about what Budi-Anumka is all about, including its meaning.: Asociación Ambiental Budi Anumka

MAPUCHE- LAFKENCHE: Mapuche (People of the Earth/People of the Sea) who inhabit the territorial space next to the sea or LAFKEN-MAPU, where they develop in a special relationship with the sea and with all forms of life present there.

ITROFILLMONGUEN: Set of tangible and intangible elements of the biocultural heritage central to Mapuche life, including spiritual energies or newen and the che or human person as indissoluble parts of the diversity of life that makes up each space or Lof that we inhabit.

KUIFIKE KIMÜN: Wisdom, knowledge, and ancestral values ​​inherited by the Mapuche people from our ancestors.

AYLLA REWE BUDI: Lafken-Mapu’s system of life (politically, socially and economically) between the Imperial River (Traytrayko lewfü) in the north and the Toltén river (Troltreng lewfü) in the south, of which, at present, its socio-cultural aspects are still valid around each of the nine Rewe or ceremonial complexes that compose it.

AZMONGEN: Social and territorial organization of the Mapuche people.