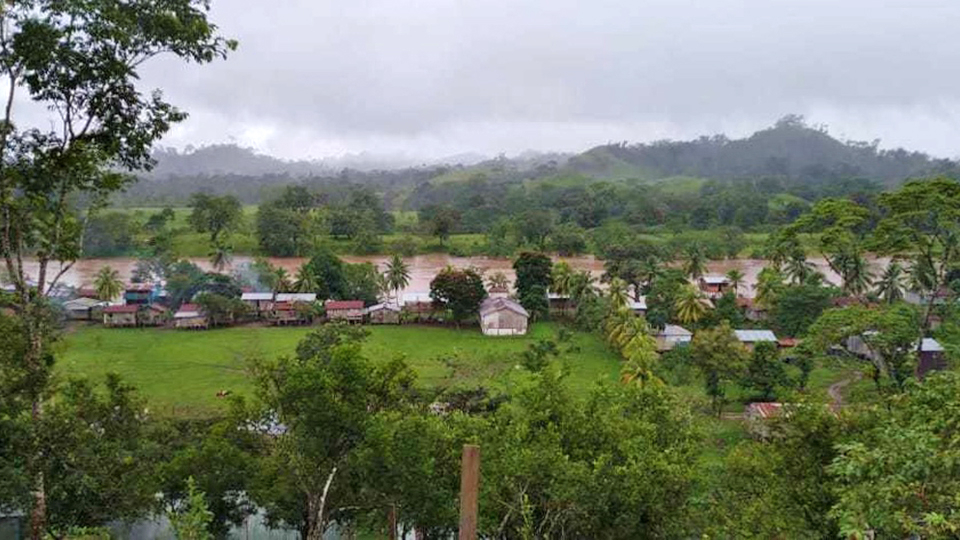 As of January 2020, the land conflict and the pattern of systematic and widespread violence against those defending the rights of the Mayangna and Miskitu indigenous peoples has escalated at an alarming rate. This is due to the impunity of the perpetrators and executors of illegal land trafficking and the usurpation of natural resources and land in general, facilitated and permitted by state authorities in what appears to be a policy of covert internal colonization by the State.

The Mayangna and Miskitu communities and territories are located in the Coco (Wangki) River basin and the Bosawás Biosphere Reserve, located in the Autonomous Region of the Northern Caribbean Coast (Región Autónoma Caribe Norte – RACCN). This reserve was recognized by the UNESCO “Man and the Biosphere” program in October 1997 and ratified by the Government of Nicaragua in 2001.

This area is part of the heart of the Meso-American biological corridor and is also the second largest tropical rainforest in the Americas, after the Amazon rainforest. As a result, it is considered a UNESCO World Heritage Site. Bosawás is the traditional territory of the Miskitu and Mayangna Indigenous peoples, titled as such by the State of Nicaragua in 2005 [1].

Since January 2020, at least 13 murders, eight people injured in armed attacks, two kidnappings, the forced displacement of a community, most of them members of the Mayangna Indigenous people, and two assaults on two underage Miskitu Indigenous girls were reported, compared to a total of 49 Miskitu Indigenous people killed, 49 injured, 46 kidnappings and four missing between 2011 and 2020, according to the Centre for Justice and Human Rights of Nicaragua’s Atlantic Coast (Centro por la Justicia y Derechos Humanos de la Costa Atlántica de Nicaragua – CEJUDHCAN). In addition, it is estimated that, due to the violence, some 1,000 Miskitu Indigenous people are currently forcibly displaced in other communities and municipal capitals, as well as in communities bordering Honduras. These acts are committed by non-State actors with the acquiescence of the State, which, as will be discussed below, does not investigate the facts. CEJUDHCAN has also denounced serious food insecurity among Indigenous people deprived of their lands and sources of income, generating imminent ethnocide due to the extermination that these Indigenous peoples of Nicaragua are suffering.

Indeed, the Mayangna and Miskitu communities and defenders of indigenous rights are under constant threat from groups of non-indigenous people (hereafter “settlers”[2]), who invade indigenous lands with the aim of forcibly displacing the population and occupying their lands to carry out illegal mining, marijuana planting, livestock production and logging activities. These attacks include a pattern of deliberate assaults on the communities’ sources of income, including their natural resources, means of transportation, forests, livestock, and crops. All of this demonstrates the attackers’ intention to cause their forced displacement. The violent acts perpetrated against the Mayangna and Miskitu individuals and communities are part of a context of conflict over the control of land and natural resources in indigenous territories, arising from the lack of implementation of the last stage of demarcation and titling of indigenous lands: clearing of land titles. This fifth stage consists of defining the property rights of third parties in indigenous territories, in accordance with Article 45 of Law 445/2003 of Nicaragua.[3]

Although there are 23 indigenous territories made up of 304 communities whose traditional lands have been titled as such by the State, the Nicaraguan authorities have failed to implement the ‘clearing of land title’ phase in all of them. Thus, legal insecurity and the facilitation of the immigration of settlers from the rest of the country have eased the illegal occupation and trafficking of indigenous lands in these territories, expanding the agricultural and livestock frontier over the forest of the indigenous territories and causing their deterioration and destruction. The foregoing accentuates an increase in extractive activities by forestry, mining and fishing companies, the promotion of African palm monoculture, and the announcement of the Nicaragua Interoceanic Grand Canal megaproject.

In addition, the vulnerability of those defending Mayangna and Miskitu indigenous rights is exacerbated by the systematic impunity of violence against them. Threats, aggressions, assassinations and forced displacements are not investigated by the Nicaraguan authorities and, therefore, those materially and intellectually responsible are never prosecuted.

All this despite the fact that the rights of indigenous and Afro-descendant peoples are recognized by Nicaraguan domestic legislation,[4] in accordance with the provisions of regional and international treaties on the protection of Indigenous peoples’ rights.[5]

Also, the State of Nicaragua has failed to implement the precautionary and provisional measures granted by the Inter-American Commission on Human Rights (IACHR) and the Inter-American Court of Human Rights (IACHR Court) since 2015 to 12 Miskitu indigenous communities and one Mayangna community.[6] The State has also failed to fulfil its obligation to develop the protection mechanisms and investigation protocols for cases of situations of risk, threats and aggressions against human rights defenders required by the IACHR Court in 2017.

With the publication of this briefing, the Observatory together with the Nicaraguan Human Rights Centre (Centro por la Justicia y Derechos Humanos de la Costa Atlántica de Nicaragua – CENIDH), the Centre for Legal Assistance for Indigenous Peoples (Centro de Asistencia Legal a Pueblos Indígenas – CALPI) and CEJUDHCAN aim to highlight the pattern of systematic violence against individuals and communities defending the rights of the Miskitu and Mayangna Indigenous peoples of the Bosawás Biosphere Reserve and the Coco (Wangki) River basin, and bring to light the violent attacks that have occurred against them since January 2020.

[1] The Bosawás Biosphere Reserve is located in the municipalities of Wiwilí, El Cuá and San José de Bocay in the department of Jinotega, Wiwilí de Nueva Segovia, Waslala, Bonaza, Siuna and Waspán in the Autonomous Region of the Northern Caribbean Coast of Nicaragua. [2] Non-indigenous persons who invade indigenous territories and intend to remain in these territories forcefully usurping lands and natural resources, without the State authorities fulfilling their duty to protect Indigenous peoples and their territories. [3] In accordance with the provisions of Law 445/2003 of Nicaragua, the stages of the process of demarcation and titling of indigenous lands are the presentation of the application, conflict resolution, measurement and boundary marking, titling and the clearing of land titles. [4] Articles 5, 8, 11, 46, 49, 49, 51, 52, 89, 90, 91, 121, 180 and 181 of the Political Constitution. In addition, Laws 445 and 28 of the Statute of Autonomy of the Regions of the Atlantic Coast of Nicaragua establish a regime of autonomy on the Caribbean Coast. [5] ILO Convention No. 169 on Indigenous and Tribal Peoples; United Nations Declaration on the Rights of Indigenous Peoples; American Declaration on the Rights of Indigenous Peoples and the OAS American Convention on Human Rights. [6] The communities of Santa Fe, El Naranjal, El Cocal, Olopaywas, in the Miskitu Wanki Li Aubra indigenous territory; the Miskitu indigenous communities of Esperanza, Santa Clara, Wisconsin and Francia Sirpi in the Wangki Twi-Tasba Raya indigenous territory; San Gerónimo, Esperanza Rio Coco and Klisnat, in the Wangki Li Aubra indigenous territory; and the Wiwilak community in the Lilamni Tasbaika Kum indigenous territory in the RACCN.

The Observatory for the Protection of Human Rights Defenders (the Observatory) was created in 1997 by the World Organisation Against Torture (OMCT) and FIDH. The objective of this programme is to prevent or remedy situations of repression against human rights defenders. OMCT and FIDH are both members of ProtectDefenders.eu, the European Union Human Rights Defenders Mechanism implemented by international civil society.

The Nicaraguan Centre for Human Rights (Centro Nicaragüense de Derechos Humanos – CENIDH) is a non-governmental organization founded in 1990 whose mission is the promotion and protection of human rights in Nicaragua through active and moral support for people in their self-defense, immediate presence in conflicts, proactive mediation, education, and mobilising communication. CENIDH is a member organization of OMCT’s SOS-Torture Network, as well as of the FIDH.

The Centre for Legal Assistance for Indigenous Peoples (Centro de Asistencia Legal a Pueblos Indígenas – CALPI) is a non-governmental organisation that has been promoting the dissemination and effective enforcement of the rights of ethnic or Afro-descendant communities of the Autonomous Regions of the Caribbean Coast, and of the Indigenous peoples of Nicaragua since 1996; through legal counsel for traditional authorities and indigenous and Afro-descendant communities in the defence and preservation of their traditional community lands and other natural resources, in accordance with the rights established in the Political Constitution of the Republic of Nicaragua.

The Centre for Justice and Human Rights of Nicaragua’s Atlantic Coast (Centro por la Justicia y Derechos Humanos de la Costa Atlántica de Nicaragua – CEJUDHCAN) is a non-governmental organisation made up of indigenous professionals that has been working to develop the capacities of Indigenous peoples and ethnic communities of the Atlantic Coast of Nicaragua since 2003, to promote actions promote gender equality, the defence of their territorial rights and greater decision-making at the local, regional, national, and international levels.