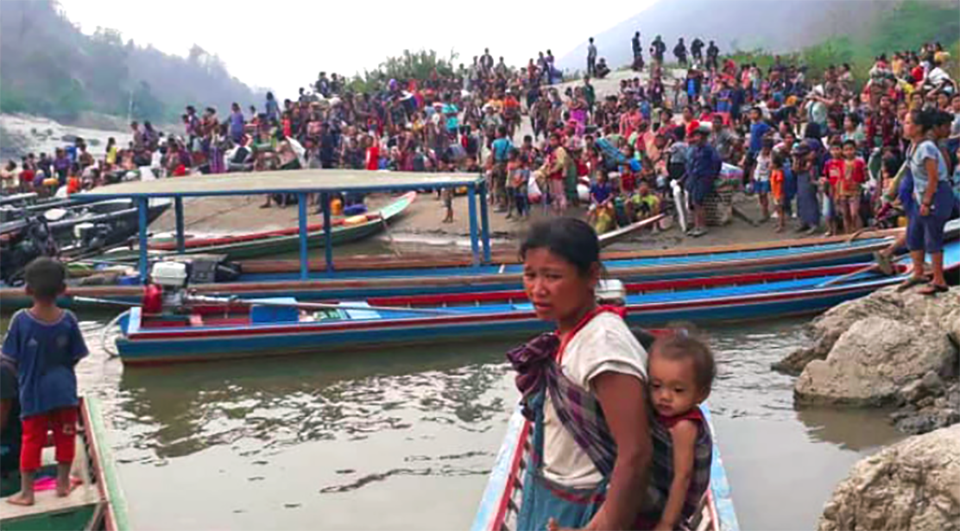 Featured image: Featured photo caption: Villagers fleeing airstrikes by the military junta in the Karen State of Myanmar gathered along the banks of the Salween River after being forced back by the Thai army. Photo via Salween Peace Park

Military airstrikes on the Salween Peace Park starting on 27 March 2021 have affected tens of thousands of Indigenous villagers in northern Karen State in Burma/Myanmar. The ICCA Consortium has issued an open letter and call to action condemning the military’s human rights violations and violence against Indigenous peoples, ethnic groups, and other innocent civilians.

The ICCA Consortium is a global association that recognizes and supports Indigenous peoples and local communities as the guardians and caretakers of the diversity of life on Earth. [1]

We are deeply concerned by the illegal seizure of power by the Myanmar military on 1 February 2021, which installed a junta after detaining duly elected civilian leaders. Since that date, the junta has violated the rights of the citizens of Myanmar, including Indigenous peoples’ right to live in freedom, peace and security and to not be subjected to any act of genocide or violence (UNDRIP, Article 7). We condemn all violence and use of force and tactics of oppression and suppression against innocent civilians. We stand in solidarity and support our Indigenous sisters and brothers and all Indigenous and ethnic groups in and from Myanmar whose rights are being violated by the Myanmar military junta.

We have received reports that on 27 March 2021, the Myanmar military began launching a series of deadly airstrikes on Day Bu Noh and surrounding villages in the heart of the Salween Peace Park in the Mutraw (Hpapun) District in Karen State, as well as in other Karen areas outside of the Peace Park in Kler Lwee Htoo (Nyaunglebin) District. As of 1 April 2021, the military has carried out several aerial bomb attacks, killing at least 19 people, injuring at least 27 more, and forcing several thousands to flee their villages in seek of refuge and shelter (Report by Salween Peace Park – PDF File).

Around 3,000 Karen refugees have attempted to flee across the border into Thailand, with some being turned back by the Thai government. At least 20,000 villagers remain internally displaced, scared for their lives, and hiding in the mountains and forests of the Salween Peace Park. The attacks are known to have destroyed and damaged many homes and buildings such as schools and a hospital. The extent of the damage to agricultural areas, cultural sites, and the local environment is currently unknown.

These horrific attacks on innocent civilians within the Salween Peace Park are an assault on Indigenous peoples’ right to self-determination and peace. The Salween Peace Park is a powerful, award-winning Indigenous initiative that was declared by nearly 350 Indigenous Karen villages [2] in December 2018 to bring peace and harmony after 70 years of armed conflict and to provide a safe haven for Indigenous peoples to sustain their culture and nature. However, the cloud of military occupation continued to hang over the area.

Attacks on Indigenous peoples and ethnic minorities, especially in remote rural areas, often go unreported and unnoticed by global media, contributing to a lack of accountability and a culture of impunity for human rights and environmental violations. The attacks since 27 March came after four months of intensifying Burmese artillery assaults on Karen villages in the Mutraw and Kler Lwee Htoo Districts. When the military staged the coup d’état on 1 February, their artillery attacks had already forced more than 5,000 Karen villagers to flee.

“For Indigenous Karen people who bear the trauma of decades of violent conflict and human rights abuses, the current attacks represent their worst nightmares. Since 2016, they have been developing the Salween Peace Park. They dreamt and believed there would be peace in the future, and they were busy doing their part to build that future. Now the Burmese military is bombing the Salween Peace Park… More than anything, the people of Mutraw long to live on their own ancestral lands in peaceful co-existence with other ethnic peoples and communities in Burma. The peace park offers a way to build true peace, reconciliation, and a shared future.”Salween Peace Park statement, 2 April 2021 Across the country, citizens of Myanmar have responded to the 1 February coup with unprecedented demonstrations and mobilization. Thousands of people in the Salween Peace Park also held demonstrations expressing solidarity with anti-coup protestors while reiterating Karen aspirations for equality, self-determination, peace, and communal harmony. The junta has responded with brutal force, limiting citizens’ access to the internet, cracking down on peaceful protests, arresting activists, journalists, civil servants, and students, and torturing and killing several detained people. The United Nations (UN) High Commissioner for Human Rights and the UN Special Adviser on the Prevention of Genocide said that since the junta seized power, thousands have been arbitrarily arrested, with many subjected to enforced disappearance. [3] Nearly 550 people have been killed since the coup began. On 27 March 2021 alone, security forces killed at least 107 people, including seven children, with hundreds more injured and detained. On 31 March 2021, the UN Special Envoy for Myanmar told a closed session of the UN Security Council that “the urgency for a solution to this crisis could not be clearer” as the most serious crimes and violations of international law appear to be “happening in plain sight” and warned of “the possibility of civil war at an unprecedented scale”. [4]

Given the gravity of the current situation, including the deadly airstrikes on Indigenous peoples in the Karen State and within the Salween Peace Park starting on 27 March 2021, we call on the following:

Only immediate concerted action can address the current situation in Myanmar, and prevent more human rights violations. We urge all parties to act without further delay.

Stay up-to-date with the latest information about this situation through our alert page: https://www.iccaconsortium.org/index.php/2021/04/05/alert-myanmar-junta-bombs-indigenous-salween-peace-park/

Organizational endorsements and other letters of support

Individual endorsements of the open letter

[1] Registered in Switzerland as a non-profit association, the ICCA Consortium promotes appropriate recognition of and support for territories and areas conserved by Indigenous peoples and local communities (abbreviated as “ICCAs” or “territories of life”). At the time of publication, it is comprised of 170 Member organisations (Indigenous peoples’, community-based and civil society organizations) and 415 Honorary members (individuals) from 80 countries around the world. Within Southeast Asia, the membership includes 22 Members from six countries and 44 Honorary members. [2] The 5,400-km2 Salween Peace Park received the prestigious Equator Prize in June 2020 from the UNDP Equator Initiative in recognition of outstanding community efforts to reduce poverty through the conservation and sustainable use of biodiversity. Saw Paul Sein Twa (chairperson of the Peace Park’s governing committee) also received the Goldman Environmental Prize for Asia in 2020. [3] Joint Statement by Alice Wairimu Nderitu, UN Special Adviser on the Prevention of Genocide, and Michelle Bachelet, the High Commissioner for Human Rights, on the situation in Myanmar (28 March 2021): “Myanmar: Top UN officials condemn “systematic” attacks on peaceful protesters, and flag international responsibility to protect the people from atrocity crimes”. Available online at: https://www.ohchr.org/EN/NewsEvents/Pages/DisplayNews.aspx?NewsID=26954 [4] UN News (31 March 2021): “Myanmar: ‘Significant action’ needed by Security Council to prevent ‘bloodbath’”. Available online at: https://news.un.org/en/story/2021/03/1088822 [5] Salween Peace Park on Facebook: https://www.facebook.com/Salween-Peace-Park-105819057562017/ and on Twitter: @SalweenP

Featured image: Villagers fleeing airstrikes by the military junta in the Karen State of Myanmar gathered along
the banks of the Salween River after being forced back by the Thai army. Photo via Salween Peace Park