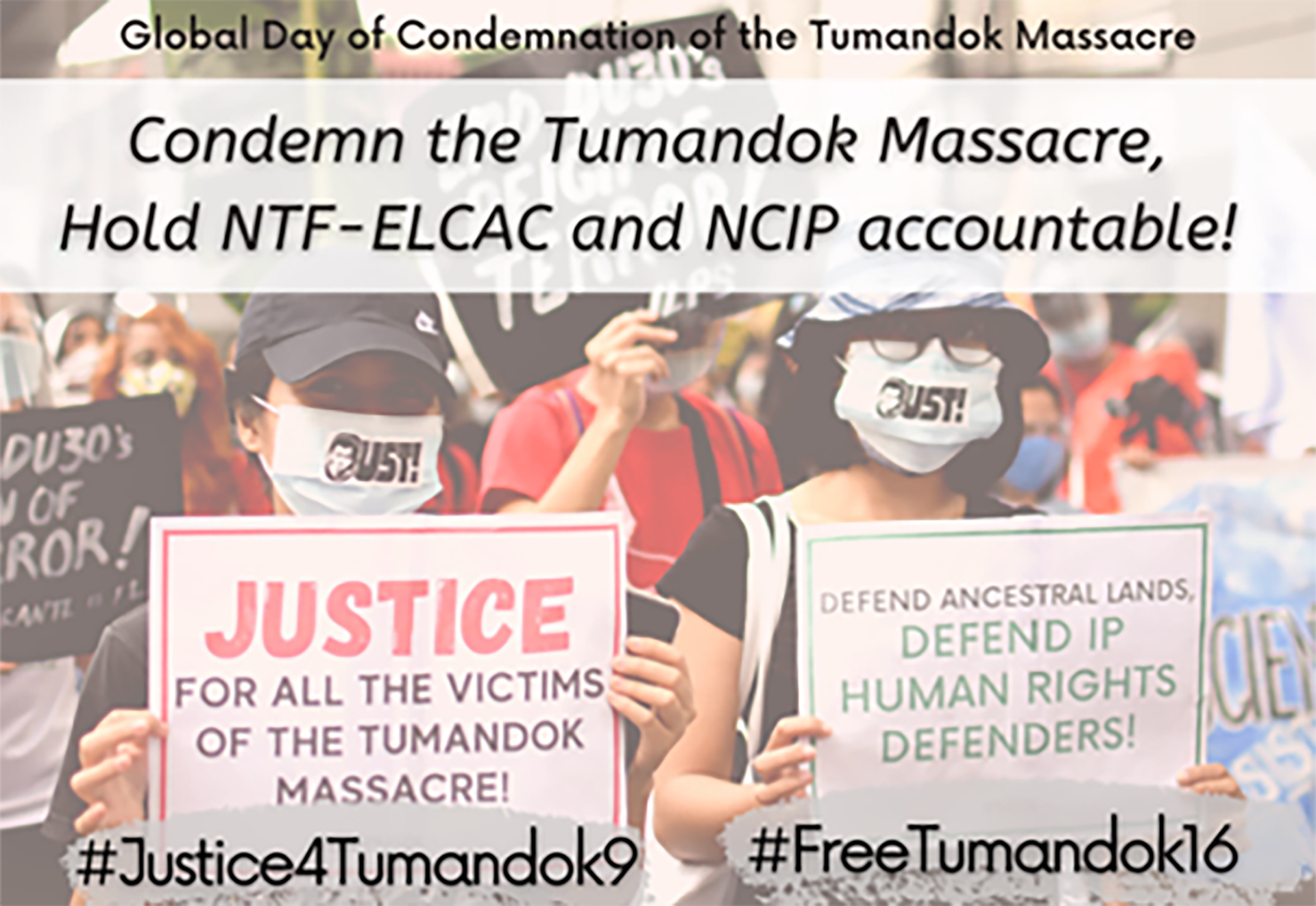 The Indigenous Tumandok people of Central Panay, Philippines, have faced a series of horrific attacks arising from a proposed mega-dam in their ancestral domain. The ICCA Consortium stands in solidarity with the Tumandok and calls for justice for those killed and arbitrarily arrested and the immediate cessation of harassment, red-tagging, and other violent tactics that attempt to intimidate and silence Indigenous peoples

Warning: This content includes disturbing information, including human rights violations and violence against Indigenous peoples and their supporters

The Indigenous Tumandok people have a rich culture that is rooted in their ancestral domain along and within the Jalaur and Pan-ay Rivers in Central Panay, Philippines. They have faced several threats to their lives and territory, particularly surrounding the proposed construction of the Jalaur River Multi-Purpose Project, a USD 200 million project financed by the Export-Import Bank (Eximbank) of the Republic of Korea.

On 30 December 2020, 9 Indigenous Tumandok were killed and 16 more arbitrarily arrested in an operation conducted by the Philippine police and military in various Tumandok communities in Tapaz, Capiz, and Calinog, Iloilo.

On 28 February 2021, Tumandok village chief Julie Catamin was shot dead while driving home in Calinog town in Iloilo after receiving several threats. Three days later, Atty. Angelo Karlo Guillen, one of the legal counsels of the Tumandok tribe members who were arrested in December 2020, was stabbed in the head and his laptop and documents were stolen by the suspects, who remain unidentified and at large.

These killings and attacks are part of an appalling global trend of threats, harassment, criminalization, and murder of people who stand up for Indigenous rights and the environment, with the Philippines in particular as a hotspot under the current Duterte administration. The government of the Philippines is known to use a range of tactics to intimidate, harass, threaten and harm Indigenous peoples and human rights defenders, including surveillance, trumped-up search warrants, raids, arbitrary detentions, and red-tagging (labeling individuals and groups as communists or terrorists) before killing them. According to a June 2020 report of the UN High Commissioner for Human Rights, red-tagging, in particular, has been a persistent and powerful threat to civil society and freedom of expression for decades in the Philippines. The people who were killed and arrested are leaders and members of the TUMANDUK Organization who have campaigned for a decade against the Jalaur River Multi-Purpose Project Phase II. The Tumandok’s resistance to the mega-dam project has been aimed at asserting their rights to self-determination and self-governance in accordance with the UN Declaration on the Rights of Indigenous Peoples (UNDRIP) and other relevant domestic and international instruments. Article 10 of the UNDRIP states, “Indigenous peoples shall not be forcibly removed from their lands or territories. No relocation shall take place without the free, prior, and informed consent of the indigenous peoples concerned and after agreement on just and fair compensation and, where possible, with the option of return.”

However, according to the TUMANDUK Organisation and Defend Panay Network, earlier attempts of the project proponents to secure free, prior, and informed consent (FPIC) were coupled with bribery, cooptation, intimidation, and use of force by the combined forces of the National Commission on Indigenous Peoples, National Irrigation Administration and the Armed Forces of the Philippines and Philippines National Police. This is not genuine FPIC in accordance with international human rights law and raises serious concerns and doubts about the project proponents’ and financiers’ due diligence processes. If the dam becomes operational, around 17,000 men, women and children are expected to be displaced without the security of relocation. The displacement would cause irreparable damage to the Tumandok, who are in danger of losing not only their homes but also longstanding cultural traditions that are essential to their Indigenous identity and existence. These include, for example, the epic Suguidanon of Panay, Binanog dancing, and Panubok (Indigenous embroidery), all of which are rooted in the land as a sacred celebration of life and heirlooms more prized than earthly goods. The Tumandok community’s sacred site and five burial grounds would be destroyed in this conflict, severely affecting their Indigenous spiritual way of life. It is these very cultures and practices that have enabled forests, watersheds, and rivers to thrive and flow freely, and are considered sacred and intended to be passed on intact to future generations.

“Halawod” by Anna Tejero is a short documentary on the struggle of the Indigenous Tumandok people as they face dispossession from their ancestral lands due to the construction of a mega-dam.

In response to a Business & Human Rights Resource Centre campaign page created to condemn the killings of the members of Tumandok, the Korean Eximbank responded on 22 February 2021, denying any involvement or links with the mega-dam project and claiming that the FPIC process was legitimate (despite evidence otherwise). However, it is not difficult to see the direct connections between the attacks against the Tumandok people and their struggle to defend their land, lives, and livelihoods against the construction of the Jalaur River Multi-Purpose Project Phase II, especially in the broader context in which these attacks happened.

On 14 May 2021, the ICCA Consortium sent a letter to the bank urging them to respect the lives, rights, culture, and self-determined priorities and futures of Indigenous peoples and their communities by immediately ceasing funding for the Jalaur River Multi-Purpose Project Phase II. Among other actions, the letter also called on the bank to meet with the communities’ self-determined representatives.

The ICCA Consortium joins the Tumandok people in demanding the following: