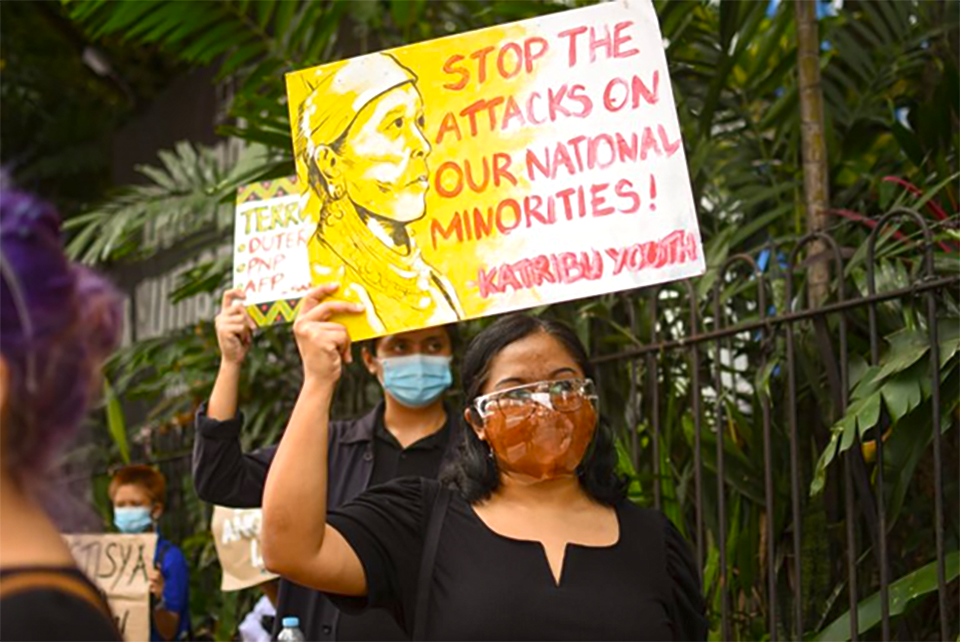 Katribu youth demonstrating against the attacks on the Tumandok. Photo by Carlo Manalansan: Via Bulatlat

Legal actions have secured the release of six Indigenous Tumandok who were arbitrarily arrested along with ten others in a horrific raid on 30 December 2020 that killed nine fellow Tumandok. The ICCA Consortium continues to stand in solidarity with the Tumandok and Defend Panay Network and further expresses concern with how the Philippines’ state legal system is weaponized to perpetuate injustices against Indigenous Peoples

By the ICCA Consortium

On 30 December 2020, nine Indigenous Tumandok were killed and 16 more arbitrarily arrested in an operation conducted by the Philippine police and military in Central Panay, Philippines, apparently as retribution for their sustained resistance to the proposed Jaluar River mega-dam. With the support of both pro bono and private lawyers and civil society allies, the TUMANDUK Organisation and Defend Panay Network have been pursuing justice through the state legal system, including challenging search warrants and trumped-up charges of illegal possession of firearms and explosives.

READ MORE: Alert: Indigenous Tumandok demand a halt to violence against them and their ancestral domain in the Philippines

On 15 June 2021, after more than three months of hearing, the Regional Trial Court (RTC) of Mambusao Judge Rommel Leonor quashed the search warrants for six Tumandok and rendered these warrants invalid and all evidence suppressed. According to Judge Leonor, “[The] questioned search warrants, each having failed to satisfy the constitutional requirement of definiteness or particularity, must be declared and should be declared invalid, hence [the search warrants] all issued by the Honorable Judge Jose Lorenzo R. Dela Rosa, Branch 4, National Capital Judicial Region, Manila, are all declared INVALID.”

A week later, the Supreme Court en banc issued a new ruling that RTC Manila and Quezon City (where the search warrants came from) can no longer issue warrants outside their regional territorial jurisdictions. A 15 July message from the Defend Panay Network said that “[t]hese developments were warmly welcomed as these could be a start for the victims to attain justice. If only the “defective” warrants were not issued at all, their lives (9) would not have been lost. And the Kexim [Korean Export-Import] Bank should know this. We hope the InvestigatePH will also consider this in the Tumandok case they are now handling.”

After representatives of the Philippine National Police (PNP) and the Armed Forces of the Philippines (AFP) referred to the quashing as loopholes used to gain freedom, the Defend Panay Network issued a press statement, copied verbatim below (emphasis original).

The ICCA Consortium continues to stand in solidarity with the Tumandok and Defend Panay Network and further expresses concern with how the Philippines’ state legal system is weaponized to perpetuate injustices against Indigenous Peoples.

ILOILO City – Recently, an RTC in Capiz quashed[1] multiple search warrants used by the PNP and the AFP in the bloody joint-operation on December 30 last year, that left 9 Tumandok dead, and 16 more arrested. The trial court said the warrants were defective, and ordered the release of the Tumandok who had been detained as a result of their enforcement.

When asked to comment[2] on this matter, PNP-PRO 6 spokesperson Joem Malong and 3rd Infantry Division spokesperson Cenon Pancito III were quick to point to the plea-bargaining resorted to by some of the Tumandok in order to secure their early release.

Malong and Pancito claimed that the plea-bargaining shows that the Tumandok victims were indeed guilty of crimes.

Malong also described the motions to quash filed by the other Tumandok as “loopholes” used to gain their freedom.

Now, being the mouthpiece of an agency famous for human rights violations, Malong may find this a bit hard to understand, so we’ll make this plain.

These “loopholes” she referred to, are what freedom-loving Filipinos call CONSTITUTIONAL RIGHTS. They are enshrined in the 1987 Constitution because the framers knew that abuses would likely be committed by the government. So, our laws include remedies to address these abuses and guarantee people’s liberties.

And as to the claim that the plea-bargaining confirms the PNP and the AFP’s narrative, it is worth pointing out that the Tumandok who were arrested, as well as their families and communities, had professed their innocence[3] since the beginning.

Just like in the cases of the innocent people arrested under the Duterte administration’s war on drugs, a plea-bargain may be resorted to merely because the accused wants to get out of jail as early as possible. It does not mean that the case against him was proven.

Everyone knows how slowly the wheels of justice turn in this country. An innocent person can plea-bargain simply to avoid spending years or even decades in jail while his case drags on.

When you jail people and threaten that they cannot get out unless they plea-bargain, there is nothing voluntary about that deal.

When you kill Tumandok leaders, deploy military troops to their communities, and threaten their families while the case is ongoing, that is not a voluntary agreement.

When a potential witness[4] who claimed that the PNP’s evidence was planted is MURDERED just before trial, as was the fate of Brgy. Captain Julie Catamin, and one of the lawyers handling the case is almost killed in an assassination attempt[5], just like what happened to Atty. Angelo Karlo Guillen, any plea-bargaining deal becomes questionable at best.

Malong and Pancito see plea-bargaining as confirmation of guilt. What we see are acts of desperation from innocent people who were languishing in jail.

Clearly, there is a problem if the police and the military see constitutional rights as mere “loopholes”.

There is a problem when those who are supposed to protect you, instead, massacre your leaders, then arrest you, terrorize your family and community, tell you to plea-bargain, and then celebrate this as some sort of moral victory.

Indeed, the remarks of Malong and Pancito speak volumes about the PNP and the AFP. But then again, what can we expect from institutions implicated in countless human rights violations like murder, sexual abuse, abductions, and evidence-planting?

With remarks like these, no wonder the International Criminal Court is getting involved. Because obviously, in this country, those who are supposed to bring justice and enforce the law have become the agents of injustice and the very threat to the rule of law.