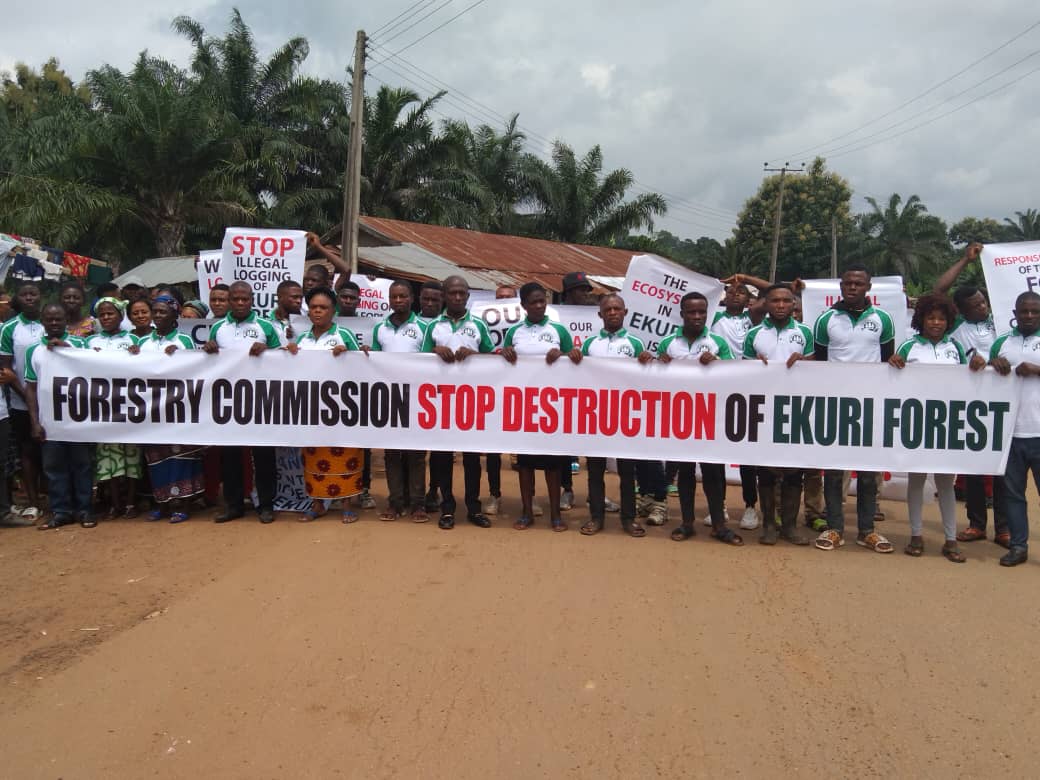 Community protests at Ekuri. Photo: via National Accord Newspaper

The New and Old Ekuri community of the Cross River state in Nigeria are resisting the illegal logging of their forest to pave way for a proposed highway. The ICCA Consortium stands with the Ekuri community and calls for the immediate end of the illegal logging and violation of the community’s rights, including free, prior and informed consent, and continuous undermining of their longstanding efforts to conserve their forest

The Ekuri community forest (33,600 ha) in the Cross River state in Nigeria is conserved and managed by the Old and New Ekuri who joined together to resist threats of logging and destruction to their forest. In 1992, the Old Ekuri community initiative was started by the community chiefs to enable the Ekuri people to manage their community forest. The aim of the initiative was to be a vehicle for community development, conservation, sustainable forest management and address poverty by improving access to sustainable livelihoods. Through this initiative, the community had roads for their local road construction projects and have therefore moved with ease through the forest. The Ekuri community forest is rich in fauna, including chimpanzee, drill, monkeys, buffalo, black duiker, pangolin, chevrotain, eagles, parrots and owls, among others, all of which are being threatened by unsustainable logging, hunting and farming.

The community’s self-determined efforts to conserve and sustainably manage their forest were recognised by UNDP with the Equator Prize in 2004. The forest later became a pilot site for the UN REDD+ program for maintaining their forest. These efforts have also been published as one of the best practices of community forest conservation in Nigeria. This initiative would surely be one to be emulated by other conservation initiatives across the world.

In 2015 the Cross River state authorities announced plans to build a six-lane, 260-kilometer (162-mile) superhighway that would link a port in the capital city of Calabar to neighboring Benue state in central Nigeria. Since 2016, threats of destruction of the iconic Ekuri community rainforest for the development of a highway have been on the rise. This is despite the community’s efforts to keep their forest through initiatives from as early as the 1990s. The community organised protests in the same year to oppose the destruction of their forest for the construction of the highway.

READ MORE: “Support the struggle of the Consortium’s Member Ekuri Initiative to prevent the destruction of their community forest…” (2016)

The Governor of Cross River State and the Forestry Commission failed to respond to the petitions sent by the community. Local community efforts to hold demonstrations and lobby decision-makers have not yielded any fruits either. Since 2019, logging of the community forest has continued and even intensified. These events have informed fresh protests and developments in the Ekuri community.

On 4 May 2021, 24 Ekuri community Chiefs and elders wrote a letter to President Bohari, requesting him to intervene and bring to a stop the illegal leases issued to Sibawood company and Agriculture Nigeria to log timber on the community forest. The petition attracted international media but the Presidency has yet to respond. The community has also written many other protest letters against the logging of their precious forest.

Recently, the Ekuri community was joined by their neighbouring communities and organised more protests to decry the illegal timber logging from the community forest. As has been the case with many Indigenous Peoples, the Ekuri community and their neighbours have become victims of criminalisation (in the name of forestry banditry) simply for demanding the protection of their basic rights.

In support of the Ekuri community and on behalf of our membership, the ICCA Consortium calls on the Nigerian and Cross River State governments to:

Updates on support: With networking and technical support from the ICCA Consortium, the Ekuri community has secured financial support  for emergency needs from the African Environmental Defenders Fund (an initiative of Natural Justice in collaboration with the International Land Coalition, ICCA Consortium and the African Activists for Climate Justice Coalition; apply to the fund here) and from the Rights and Resources Initiative’s Strategic Response Mechanism for advocacy and legal needs.