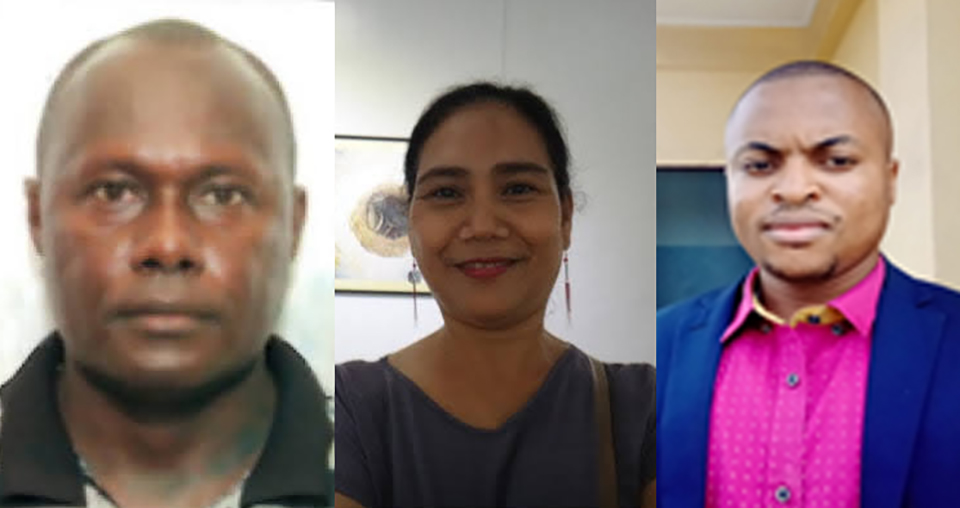 We are pleased to announce a new regional coordination team for East Austronesia and the Pacific Islands, and a new African regional focal point for international policy

Jimmy Kereseka from the Solomon Islands and Jovelyn (“Jovy”) Cleofe from the Philippines have joined the ICCA Consortium’s Secretariat as the new joint Regional Coordinators for East Austronesia and the Pacific Islands on behalf of our Member LMMA Network International. This is a new regional coordination role that has grown out of our ongoing regionalization process and efforts to strengthen our association’s support for Indigenous Peoples, local communities, and territories of life in this region. In addition, Aquilas Koko Ngomo from DRC has expanded his role as a collaborator with our linguistic support team to also encompass the new role of Africa Regional Focal Point with our international policy team, working closely with Ameyali Ramos and Carolina Rodriguez to support our Members and Honorary members in Africa to engage with the post-2020 global biodiversity framework.

Please join us in welcoming Jimmy, Jovy, and Aquilas in their new roles in the Secretariat and broader group of collaborators.

Jovelyn T. Cleofe (based in the Philippines): Jovelyn (“Jovy”) has worked in community fisheries and partnered with coastal communities since the late 1980s, when she started working at the Center for Empowerment and Resource Development (CERD), Inc. As CERD’s Executive Director, she developed programs and projects around community-based coastal resource management, livelihood development, and gender and development in the fisheries sector. She believes that men and women fishers should lead the protection, conservation, and management efforts of coastal and marine resources and benefit from their efforts. She has also been involved in fisheries advocacy efforts and community-level work to empower women fishers. She is a founding member of and co-coordinated the LMMA Network in the Philippines since the mid-2000s. Through the Locally Managed Marine Area (LMMA) Network International, she supported the seven Country Network members across Asia and the Pacific to enable coastal communities and Indigenous Peoples to exercise their rights over their land and marine territories. Her involvement in the LMMA Network, both at the country level in the Philippines and at the regional level, led to her joining the ICCA Consortium Secretariat in 2022 as part of the regional coordination team for East Austronesia and the Pacific Islands along with her colleague Jimmy Kereseka. She is also currently engaged in mainstreaming fisheries and gender and development issues in disaster risk reduction in selected areas in the Philippines.

Aquilas Koko Ngomo (based in Bukavu, DRC): Aquilas collaborates with the ICCA Consortium as International Policy – Africa Regional Focal Point and interpreter and translator (French <> English). He holds a Bachelor’s degree in English and African Culture. He works as a Communications Officer for the Alliance Nationale d’Appui et de Promotion des Aires et Territoires du Patrimoine Autochtone et Communautaire en RDC (ANAPAC-RDC), a non-governmental organization that defends the rights of Indigenous Pygmy Peoples in the DRC and a Member of the ICCA Consortium. He also works as a Consultant interpreter and translator (French-English-Swahili) with Indigenous Peoples Rights International (IPRI), an international Indigenous rights non-governmental organization based in the Philippines. In addition, Aquilas teaches as an assistant in the Department of English and African Culture at the Higher Pedagogical Institute of Bukavu (ISP-Bukavu) in the Democratic Republic of Congo.